The Penna (also Pennar, Penner or Penneru and Pinākinī in Sanskrit) is a river of southern India. The Penna rises on the hill of Nandi Hills in Chikballapur District of Karnataka state, and runs north and east through the state of Andhra Pradesh to empty into the Bay of Bengal. It is 597 kilometres (371 mi) long, with a drainage basin covering 55,213 km2:[2] 6,937 km2 in Karnataka and 48,276 km2 in Andhra Pradesh. The river basin lies in the rain shadow region of Eastern Ghats and receives 500 mm average rainfall annually.

The name of the river Penneru (alternatively Penner) is seemingly derived from Telugu words penu పెను meaning grand and yeru ఏఱు / యేఱు meaning river, stream, or a rivulet or else from neeru నీరు water, in flow of course. 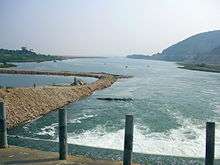 The watershed of the Penna and its tributaries covers part of the southern Deccan plateau, including most of the Rayalaseema region of Andhra Pradesh and part of Karnataka.[3] The Kolar Plateau forms the divide between the Penna watershed and those of the Kaveri, Ponnaiyar, and Palar rivers to the south. The Penna drains the northern portion of the plateau, which includes parts of Kolar and Tumkur districts in Karnataka. The Krishna River and its tributaries drain the Deccan plateau to the west and north of the Penna's watershed, and the low Erramala hills forms the northern divide of the Penna basin. The upper watershed of the Penna includes Cuddapah District, central and eastern Anantapur District, the southern part of Kurnool District, northwestern Chittoor District. The main tributaries of the Penna are the Jayamangali, Kunderu and Sagileru from the north, and the Chitravathi, Papagni and Cheyyeru from the south. The Penna then flows east through a gap in the Eastern Ghats ranges onto the plain of Coastal Andhra, flowing through Nellore city before it empties into the Bay of Bengal at a place called Utukuru, 15 km east of Nellore.

The estuary of the Penna river extends 7 km upstream from the Bay of Bengal. Tidal influence and salt water extends further upstream during the November to June dry season. Coastal dunes as high as 7 meters form around the river mouth. Upputeru tidal creek, 15 km in length, and Isakapalli lagoon, separated from the Bay of Bengal by the Isakapalli barrier island, 180 m long and up to 3 m high, form the main coastal wetlands.

The upper basin of the Penna is largely made up of ancient Archean rocks, principally granite and schist. The lower basin is made up of young sediments, including laterite and recent alluvium.

The Penna basin has a dry tropical monsoon climate. The upper basin of the Penna is semi-arid, with summer temperatures of 25–46 °C and winter temperatures of 18–28 °C. Most of the rainfall is provided by the moisture-bearing southwest monsoon, which provides rain to most of India between June and September. The Penna basin lies in the rain shadow of the high Western Ghats ranges, which prevents much moisture from reaching the region. Post-monsoon cyclonic storms in the coastal region produce additional rain during September and October. The winter northeast monsoon, which provides rain between December and March, provides little rain to the upper basin and slightly more to the lower basin. It varies greatly from year to year in south India, sometimes bringing powerful cyclonic storms with flooding and high winds. The mean annual rainfall is 550 mm/year in Anantapur, and 900 mm/year in Nellore. The Penna basin suffered from a prolonged drought in the 1990s, which caused much misery among the regions farmers and generated political demands to build an aqueduct to bring water from the Krishna River to Rayalaseema.

The upper basin was formerly covered by tropical dry forest, thorn forest, and xeric shrublands. Most of the dry tropical forest has now disappeared, due to clearance for grazing and overharvesting the forests for timber and firewood, replaced by thorny shrublands. The remnant forests of the Deccan are largely deciduous, dropping their leaves in the dry winter and spring months. The East Deccan dry evergreen forests of Coastal Andhra were evergreen, but these forests have largely been reduced to tiny remnant pockets.

The small boat port of Krishnapatnam used to lie on Upputeru creek, and has now been developed into a deep-water port. Buckingham Canal, a navigable man-made waterway that runs just behind the coast, allows small boats from the Penna to get to Chennai in the south and the Krishna River delta to the north. Currently as in November 2015 Krishnapatnam Port is a major port situated at a distance of 24 km from Nellore city. Krishnapatnam is one of the very few ports in the world now which can handle giant ships with load capacities of 1,50,000 tonnes. It has become one of the deepest port of India with 18 meters of draft.[4][5]

Telugu literature has flourished in the Penna basin which produced several well-known authors and poets. Aadikavi Tikkana Somayajulu, Raallapalli Anantha Krishna Sharma, Vidvan Vishvam, and C. Ramakrishna Reddy are noteworthies among them. Vidhwan Viswam's penneti paata which means "a song of River Penna" is very popular in Andhra Pradesh and in Raayala Seema in particular, it is a topic of study in graduation course Telugu language paper . Ramakrishna Reddy's "penneti kathalu" represented the tragic and cultural life of the people of Penna valley. These stories are credited to be the best of their kind with the accent of local language presented effectively.[6] 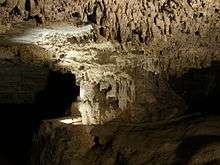 The Penna basin water apportionment is governed by colonial time water sharing agreement[7] in the year 1892 and the Interstate River Water Disputes Act 1956.[8] However the future development of Penna basin depends on Interstate water sharing agreements of Krishna river. Tungabhadra Dam which is located in Karnataka and a joint project of Andhra Pradesh and Karnataka, is the only gate way[9] to transfer water from Krishna river to the uplands of Penna basin up to 600 m MSL. The low lands of Penna basin can be supplied with Krishna river from the Srisailam dam up to 250 m MSL. The outcome of ongoing Krishna Water Disputes Tribunal – II[10] is very crucial for the future of Penna river basin.

Talakona falls is the highest waterfall in Andhra Pradesh at 270 feet (82 m) and also is popular for its medicinal effects. Belum Caves located in Kurnool district are the second longest caves in India.