The Marunouchi Line is the second line to be built in the city, and the first one constructed after the Second World War. The route is U-shaped, running from Ogikubo Station in the west of the city via the commercial and administrative district of Shinjuku through to the Marunouchi commercial center around Tokyo Station, before turning back and heading to Ikebukuro.

The Marunouchi Line is served by Tokyo Metro 02 series rolling stock in six-car trains on the main line, and three-car trains on the Hōnanchō branch. The main line is the most frequent subway line in Tokyo, with trains running at intervals of 1 minute 50 seconds during peak hours. In spite of such high-frequency service, according to a 2008 survey by the Ministry of Land, Infrastructure, Transport and Tourism the Marunouchi Line is one of the most crowded railway lines in Tokyo, running at 157% capacity between Shin-ōtsuka and Myōgadani stations.[2] Its age and relatively short train length has made it one of the most crowded lines in Tokyo, although the 2000 opening of the Toei Ōedo Line has relieved the problem somewhat. In response to crowding, Tokyo Metro upgraded all stations with chest-high platform doors on March 28, 2009, a date on which it also began driver-only operation . The Hōnanchō branch switched to driver-only operation in July 2004.[3]

Due to the age of the Marunouchi Line and the relative shallowness at which it runs, at several points in central Tokyo trains run at or above ground level. These include Yotsuya Station, the Kanda River near Ochanomizu Station (see image), and between Kōrakuen and Myōgadani stations.

On maps, diagrams and signboards, the line is shown using the color red (▉). Its stations are given numbers using the prefix "M"; Hōnanchō branch line stations carry a lowercase "m". 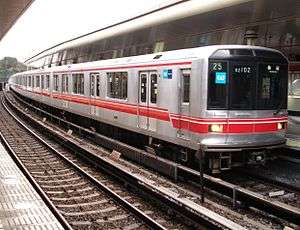 Marunouchi Line services are operated using a fleet of 53 Tokyo Metro 02 series six-car EMUs in service since 1988 together with six three-car sets used on Hōnanchō branch services. All trains are based at Koishikawa and Nakano Depots.[4] 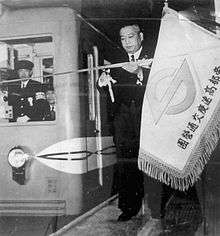 Opening ceremony at Ikebukuro in 1954

The Marunouchi Line is the second subway line to be built in the city, and the first to be constructed after the Second World War. Its design is similar to that of the Ginza Line, the oldest subway line in Tokyo. Both lines are standard gauge and use third-rail power, unlike the other Tokyo subway lines.

In a 1925 plan for a five-line subway system, the Marunouchi Line was planned to run from Shinjuku to Ōtsuka via Hibiya, Tsukiji and Okachimachi, as a 20 km (12 mi) underground route. A 1.2 km (0.75 mi) segment between Akasaka-mitsuke and Yotsuya began construction in 1942, but was abandoned in 1944 as a result of the continuing effects of World War II. On December 7, 1946, the Marunouchi Line was revised to begin from Nakano-fujimichō to somewhere in Toshima Ward, for a total length of 22.1 km (13.7 mi) On March 30, 1951, a groundbreaking ceremony was held at Ikebukuro Station East Exit to begin construction of the initial 7.7 km (4.8 mi) segment of the Marunouchi Line.

The first section was opened between Ikebukuro and Ochanomizu on January 20, 1954. The subsequent progress of the line was as follows:

The Marunouchi Line was one of the lines targeted in the Aum sarin gas attack on March 20, 1995.

The platform-edge doors at Hōnanchō Station, the terminus of the Hōnanchō Branch are due to be lengthened to allow 6-car trains to use the station, with work starting in 2013. Once completed, this will enable through trains to and from Ikebukuro to start operating all the way to Hōnanchō from fiscal 2017.[6]