Toyota is located in north-central Aichi Prefecture, and is the largest city in the prefecture in terms of area. The city area is mountainous to the north, with peaks averaging around 1000 meters in height along its northern border with Nagano and Gifu Prefectures. Much of the mountainous northern portion of the city is within the Aichi Kōgen Quasi-National Park. The central and southern portions of the city have rolling hills and agricultural flatlands.

Toyota is within a one-hour drive of Nagoya.[1]

The area of present-day Toyota City has been inhabited since prehistoric times, and archaeologists have found a continuous record of artifacts from the Japanese paleolithic period onwards. In early proto-historic times, the area was under the control of the Mononobe clan, who built numerous kofun burial mounds. The local place name “Koromo” is mentioned in the Kojiki and other early Japanese documents.

During the Edo period, parts of the area of the current city were under the control of Koromo Domain, a feudal han under the Tokugawa shogunate; however, most of the area of the current city was tenryō territory controlled directly by the government in Edo and administered through hatamoto class appointed administrators. The village of “Tokugawa”, from which Tokugawa Ieyasu took his clan name, was located within what is now the city of Toyota.

After the Meiji restoration, the area was organized into the towns of Asuke and Koromo and numerous villages under Higashikamo District and Nishikamo District.

The area was a major producer of silk and prospered from the Meiji period through the Taishō periods. As the demand for raw silk declined in Japan and abroad, Koromo entered a period of gradual decline after 1930.[2] The decline encouraged Kiichiro Toyoda, cousin of Eiji Toyoda, to look for alternatives to the family's automatic loom manufacturing business. The search led to the founding of what became the Toyota Motor Corporation. Toyota built the first manufacturing facility, known as Toyota Honsha plant in November 1938, breaking ground in December 1935.[3]

On March 1, 1951, Koromo gained city status, and absorbed the village of Takahashi from Nishikamo District on September 30, 1956. Due to the fame and economic importance of its major employer, the city of Koromo (挙母市) changed its name to Toyota on January 1, 1959.

In 1979 the Nagoya Railroad (Meitetsu) opened the Toyota New Line (now Toyota Line), and in 1988: The Aichi Loop Line was opened, thus considerably improving access to the city via rail transport.

Toyota became a Core City in 1998, with increased local autonomy.

Mitsuru Obe and Eric Pfanner of The Wall Street Journal stated that by 2015 Toyota was recovering from an economic depression "so deep that some were comparing it to Detroit."[4]

Toyota, as the home city of Toyota Motors is well-served by expressways and national highways. However, it is the largest city in Japan which was not served by the Japanese National Railways (JNR), or its successor, JR Central. The closest Shinkansen station is Mikawa-Anjō Station in the city of Anjō, although the limited-stop Nozomi and Hikari services do not stop there. 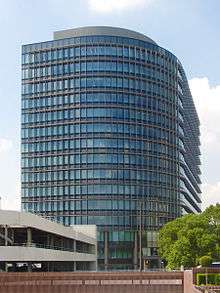 The main headquarters of Toyota is located in a three story building in Toyota. As of 2006 the head office has the "Toyopet" Toyota logo and the words "Toyota Motor". The Toyota Technical Center, a 14-story building, and the original Honsha plant, Toyota's first plant engaging in mass production and formerly named the Koromo plant, are adjacent to one another in a location near the headquarters. Vinod Jacob from The Hindu described the main headquarters building as "modest".[1] In 2013 company head Akio Toyoda reported that it had difficulties retaining foreign employees at the headquarters due to the lack of amenities in Toyota.[5]