Kita (北区, Kita-ku, "Northern Ward") is a special ward located in Tokyo Metropolis, Japan. The English translation of its Japanese self-designation is City of Kita. The ward was founded on March 15, 1947.

The area was a collection of rural villages and towns until the 1880s, when it was connected by rail to central Tokyo (Oji Station opening in 1883). Parts of the area joined Tokyo City in 1932 as the Oji and Takinogawa wards. Kita was officially formed in 1947 by the merger of these wards.[1]

The name Kita, meaning "north," reflects the location among the wards of Tokyo. To its north lie the cities of Kawaguchi and Toda in Saitama Prefecture. To the east, south and west lie other special wards: Adachi, Arakawa, Itabashi, Bunkyō, and Toshima.

Rivers include the Arakawa River and the Sumida River.

The head office of Seiyu Group is in Kita.[2] 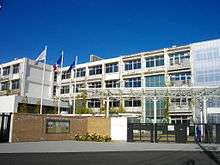 The city's public elementary and middle schools are operated by the City of Kita Board of Education.

The city's public high schools are operated by the Tokyo Metropolitan Government Board of Education.

The following international schools are in the ward:

The following universities are in the ward:

It is also twinned with the following cities in Japan.