Suginami (杉並区, Suginami-ku) is a special ward in Tokyo, Japan. In English, The English translation of its Japanese self-designation is Suginami City.

Suginami occupies the western part of the ward area of Tokyo. Its neighbors include these special wards: to the east, Shibuya and Nakano; to the north, Nerima; and to the south, Setagaya. Its western neighbors are the cities of Mitaka and Musashino.

The name Suginami dates back to the early Edo period and is a shortened version of "Suginamiki," or "avenue of cedars." This name came about when an early land baron, Lord Tadayoshi Okabe, planted a row of cedar trees to mark the border of his property.[1]

In 1970, 40 high school students were exposed to photochemical smog and required hospitalization. The incident attracted national attention and increased awareness of the dangers of pollution.[1]

The following neighborhoods make up Suginami-ku.

Historically, Suginami has leaned toward liberal activism. In 1954, local housewives launched the "Suginami Appeal" against nuclear weapons, a petition that spread nationwide and ultimately collected 20 million signatures.[1] More recently in 2005, Suginami became part of Japan's fight against nationalist textbook revisionism when residents petitioned Tokyo's courts to prevent the adoption of a controversial textbook published by Fusosha Publishing which claimed to justify Japanese actions during World War II.[1] The ward has also passed an ordinance placing limits on the installation of security cameras.[1]

To combat burglaries, which reached a record number of 1,710 in 2002, the ward created an unconventional anti-crime program called Operation Flower. The ward urged residents to plant flowers facing the street, with the long-term goal of increasing neighborhood watchfulness (necessitated by watering and otherwise attending to the plants). In addition, 9,600 volunteers were recruited for neighborhood safety patrols, 200 security cameras were placed at crime-vulnerable areas, and a daily email update was created for residents. Subsequent to the start of the program, burglaries were down 80% to 390 in 2008.[2]

Suginami refused to connect to Japan's Residents Basic Registry Network.[1] As of 2005, it is implementing a measure to make registry optional. 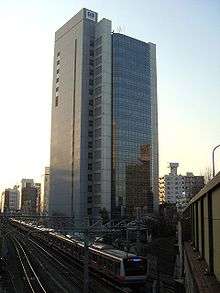 Several animation studios are located in Suginami. Bones is headquartered in Igusa,[11] while Sunrise has its headquarters near the Kami-Igusa Station on the Seibu Shinjuku Line.[12] Bones was founded by former members of Sunrise, and staff at each company often help each other on projects. The Satelight studio, originally founded in Sapporo, relocated to the Asagaya neighborhood in 2006 (an earlier Tokyo office, at a different location in Suginami, had been in existence since 2003).[13] In addition, many smaller studios are based here; as of 2006, over 70 studios (of 400 throughout Japan) were located in Suginami.[1]

The communications and electronics giant Iwatsu Electric is headquartered in Kugayama.[14]

American Express has an office i Ogikubo. Hewlett Packard Japan operates two offices, the Ogikubo office and the Takaido office, in Suginami.[15]

Microsoft has a branch office in the Daitabashi Asahi Seimei Building in Izumi.[16]

Prior to its disestablishment, Data East had its headquarters in Suginami.[17] 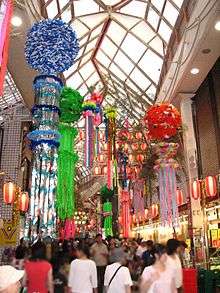