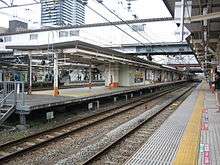 The Chūō Main Line passes through Hachiōji Station, which is 47.4 kilometers from the terminus of the line at Tokyo Station. The Yokohama Line (to Higashi-Kanagawa) and Hachikō Line (to Komagawa) terminate here. The station is also served by some Sagami Line trains via the Yokohama Line, although the Sagami Line itself does not actually reach Hachiōji.

Keiō Hachiōji Station on the Keio Line is located about 400 metres northeast from here.

The station consists of three island platforms serving four tracks with the platforms connected the elevated station building. The station has a "Midori no Madoguchi" staffed ticket office.

Hachiōji Station opened on 11 August 1889.[2] With the privatization of Japanese National Railways (JNR) on 1 April 1987, the station came under the control of JR East.

In fiscal 2014, the station was used by an average of 84,739 passengers daily (boarding passengers only), making it the fiftieth-busiest station operated by JR East.[3]

The daily passenger figures (boarding passengers only) in previous years are as shown below.