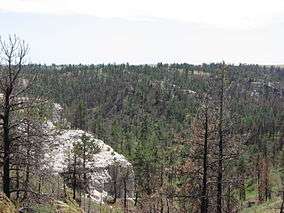 The Pine Ridge is an escarpment between the Niobrara River and the White River in far northwestern Nebraska (a small section extends into South Dakota). The high tableland between the rivers has been eroded into a region of forested buttes, ridges and canyons.

The Pine Ridge region was the setting of the closing chapters of the Indian Wars. The region was home to several bands of Lakota; several skirmishes between the Lakota and the U.S. Army took place in the 1860s and 1870s. Crazy Horse was killed at Fort Robinson in 1877. In 1879, Dull Knife led the Cheyenne Outbreak from Fort Robinson.

A large portion of the Pine Ridge is owned or managed by either the Nebraska Game and Parks Commission or by various U.S. Government agencies for preservation and recreation uses. These areas include: