In mathematics, a hexadecagon (sometimes called a hexakaidecagon) or 16-gon is a sixteen-sided polygon.[1]

A regular hexadecagon is a hexadecagon in which all angles are equal and all sides are congruent. Its Schläfli symbol is {16} and can be constructed as a truncated octagon, t{8}, and a twice-truncated square tt{4}. A truncated hexadecagon, t{16}, is a triacontadigon, {32}.

As 16 = 24 (a power of two), a regular hexadecagon is constructible using compass and straightedge: this was already known to ancient Greek mathematicians.[2]

Construction of a regular hexadecagon
at a given circumcircle

The area of a regular hexadecagon with edge length t is

Because the hexadecagon has a number of sides that is a power of two, its area can be computed in terms of the circumradius R by truncating Viète's formula:

Since the area of the circumcircle is

the regular hexadecagon fills approximately 97.45% of its circumcircle.

On the regular hexadecagon, there are 14 distinct symmetries. John Conway labels full symmetry as r32 and no symmetry is labeled a1. The dihedral symmetries are divided depending on whether they pass through vertices (d for diagonal) or edges (p for perpendiculars) Cyclic symmetries in the middle column are labeled as g for their central gyration orders.[3]

A skew hexadecagon is a skew polygon with 24 vertices and edges but not existing on the same plane. The interior of such an hexadecagon is not generally defined. A skew zig-zag hexadecagon has vertices alternating between two parallel planes.

A regular skew hexadecagon is vertex-transitive with equal edge lengths. In 3-dimensions it will be a zig-zag skew hexadecagon and can be seen in the vertices and side edges of a octagonal antiprism with the same D8d, [2+,16] symmetry, order 32. The octagrammic antiprism, s{2,16/3} and octagrammic crossed-antiprism, s{2,16/5} also have regular skew octagons.

The regular hexadecagon is the Petrie polygon for many higher-dimensional polytopes, shown in these skew orthogonal projections, including: 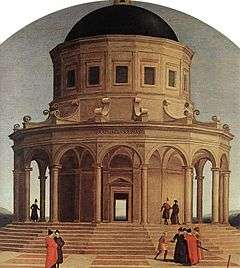 The hexadecagonal tower from Raphael's The Marriage of the Virgin

In the early 16th century, Raphael was the first to construct a perspective image of a regular hexadecagon: the tower in his painting The Marriage of the Virgin has 16 sides, elaborating on an eight-sided tower in a previous painting by Pietro Perugino.[5] 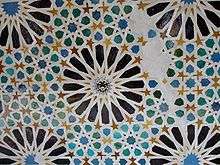 A hexadecagrammic pattern from the Alhambra

Hexadecagrams (16-sided star polygons) are included in the Girih patterns in the Alhambra.[6]

An octagonal star can be seen as a concave hexadecagon: