Roger De Vlaeminck (Dutch pronunciation: [ˈrɔʒɛi də ˈvlamɪnk];[2] born 24 August 1947) is a Belgian former professional racing cyclist. He was described by Rik Van Looy as "The most talented and the only real classics rider of his generation".[1] Nicknamed “The Gypsy” because he was born into a family of traveling clothiers, he is known for exploits in the cobbled classic Paris–Roubaix race, but his performances in other “Monument” races gave him a record that few can match. His record in Paris–Roubaix earned him another nickname, “Monsieur Paris–Roubaix” (English: “Mr. Paris–Roubaix“).

De Vlaeminck was born on 24 August 1947 in the East Flanders town of Eeklo,[3] His first love was football. At the age of 16 he debuted for F.C. Eeklo. He could have made a career in the sport, however his elder brother Erik was having success as a pro cyclist and this persuaded Roger to try cycling.[4] He raced as a junior in 1965, gaining one win, but 1966 saw 25 victories. Roger and Erik spent their winters riding cyclo-cross and in 1968 in Luxembourg Erik became world professional champion and Roger the amateur champion on the same day. Roger eventually took the professional title in 1975. 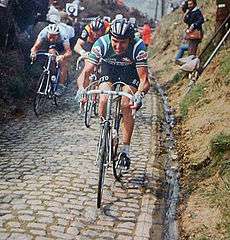 De Vlaeminck turned professional at the start of the 1969 season with Flandria-Declerck and won the Omloop "Het Volk" in his first race. De Vlaeminck’s career ran parallel with Eddy Merckx and he battled for ascendancy with Merckx throughout his career. De Vlaeminck rode Paris–Roubaix on 14 occasions, winning four times (1972, 1974, 1975, 1977), finished second four times, third once, fifth once, sixth once, seventh twice and abandoned only in 1980. His skill as a cyclo-cross rider made him an expert on the cobbles of northern France which the race crosses. De Vlaeminck used the early season Italian stage race Tirreno–Adriatico as training for the spring classics. He dominated the race between 1972 and 1977, winning on six occasions and taking 15 stages.

De Vlaeminck is one of only three riders to have won all five 'Monuments of Cycling' (i.e., Milan–San Remo, Tour of Flanders, Paris–Roubaix, Liège–Bastogne–Liège, and the Giro di Lombardia). The other two are fellow Belgians Rik van Looy and Eddy Merckx. The only major one-day race he did not win was the world road race championship, his best performance was second to Dutchman Hennie Kuiper in 1975. He rode three Tour de France, winning stage 6 in 1970 between Amiens and Valenciennes. He took the points jersey in the Giro d'Italia on three occasions as well as 22 stages over including seven stages in 1975. He took a stage win in the Vuelta a España in his final season in 1984. His career lasted 15 years (retiring in 1984) and he had 257 victories. 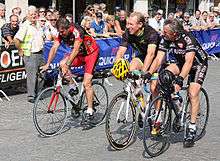 De Vlaeminck, who lives on a farm in Kaprijke, is still in cycling. He has been coaching cyclo-cross riders. In April 2004 he quit his job as coach to the John Saey-Deschacht team in Belgium to spend more time with his family, However he was tempted back to the sport in November 2004 as advisor to the Zimbabwe team as it prepared for the world championship in St. Wendel, Germany, at the end of January 2005.

De Vlaeminck is known for firm opinions about cycling and is often consulted by journalists. In particular, he criticizes the trend to have multiple leaders in a team. That, he says, means the best racers share important races between them. De Vlaeminck is also known for his harsh opinion of Tom Boonen, calling him unworthy of equaling his Paris-Roubaix record of 4 wins, claiming cycling isn't as hard as it used to be. This led to the meme "In den tijd van Roger De Vlaeminck ..." ("in the days of Roger De Vlaeminck") where De Vlaeminck was attributed to doing all kinds of unrealistic stuff.[6]