The 1962 Tour de France was the 49th edition of the Tour de France, one of cycling's Grand Tours. The 4,274-kilometre (2,656 mi) race consisted of 22 stages, including two split stages, starting in Nancy on 24 June and finishing at the Parc des Princes in Paris on 15 July. After more than 30 years, the Tour was again contested by trade teams. Jacques Anquetil of the ACCB–Saint Raphaël–Helyett–Hutchinson team defended his title to win his third Tour de France. Faema–Flandria–Clement's Jef Planckaert placed second and Raymond Poulidor (Mercier–BP–Hutchinson) third.

From 1930 to 1961, the Tour de France was contested by national teams, but in 1962, the trade teams returned.[1] Each of the fifteen teams consisted of ten cyclists,[2][3] but were required to have a dominant nationality; at least six cyclists should have the same nationality, or only two nationalities should be present.[4] For the first time, the French cyclists were outnumbered; there were 52 Italian cyclists and 50 French cyclists, the largest amounts from a nation including Belgium with 28. Riders represented a further six nations, all from Europe.[3]

Of start list of 150, the number of riders riding the Tour de France for the first time was 66.[5] The average age of riders in the race was 27.46 years,[6] ranging from the 21-year-old Tiziano Galvanin (Legnano–Pirelli) to the 40-year-old Pino Cerami (Peugeot–BP–Dunlop).[7][8] Of the total average ages, Legnano–Pirelli was the youngest team and Margnat–Paloma–d'Alessandro the oldest.[6] From the riders that began the race, 94 made it to the finish in Paris.[9] 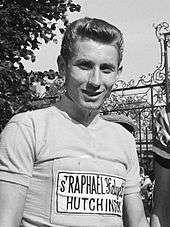 The defending champion, Jacques Anquetil, was part of the ACCB–Saint Raphaël–Helyett–Hutchinson team. This team also included Rudi Altig, and during the 1962 Vuelta a España, Altig had beaten his team leader, so observers expected some internal team struggle. The team manager of the Saint Raphael team was Anquetil's former rival Raphael Géminiani, and Anquetil had asked his sponsors to replace Géminiani for the Tour. They declined his request.[10]

Raymond Poulidor, the new star who had not started the 1961 Tour because of the national team format, started this time in the Mercier team. He started the race injured, as he had broken his hand recently, and was riding with a cast.[10]

The tour director Goddet convinced Rik Van Looy, the winner of the last two world championships, to enter the Tour; Goddet hoped that this he could add excitement.[11]

The finish of stage 2a in Herentals, Belgium, won by André Darrigade of V.C. XII–Leroux–Gitane–Dunlop

The Tour started in Belgium, and world champion Rik Van Looy wanted to wear the yellow jersey in his own country. In the final, he was in the lead group of 20 cyclists, but Rudi Altig surprised him in the sprint.[11] Pre-race favourites Poulidor and Bahamontes already lost more than eight minutes.[10] The second stage finished in the home town of Van Looy, where he took a wrong turn and lost the chance of winning the stage.[10] André Darrigade took over the lead, but Altig took it back in the third stage.

In the sixth stage, a big group escaped from the peloton. Altig and Anquetil were not there, but they had sent their team mate Ab Geldermans to protect the team's interests. Geldermans was the best-placed man in the break, and their margin was so large that Geldermans became the new leader.[10]

Because of a successful breakaway in the ninth stage, Darrigade lost the lead to Willy Schroeders. In the eleventh stage, there was a crash involving twenty cyclists, with Van Looy as the main victim. Van Looy's kidney was injured, and he was brought to hospital.[11] Schroeders kept the lead until the first mountain stage in the Pyrenees. In that stage, he could not keep up with the best climbers, and lost the lead to Tom Simpson, who became the first British cyclist to wear the yellow jersey.[10] 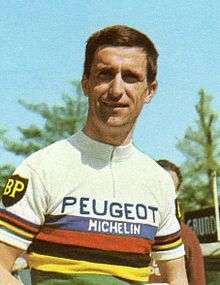 On stage twelve, Tom Simpson (pictured in 1966) became the first wearer of the race leader's yellow jersey from an English-speaking country

Simpson lost the lead in the next stage, in a mountain time trial won by Bahamontes. Jozef Planckaert finished in second place, and became the new leader.[10]

In the night after that stage, Hans Junkermann, riding for the Wiel's team, became ill. Junkermann was in seventh place in the general classification, and his team requested the start to be delayed by ten minutes, which the organisation allowed. After that stage, stage 14, had started, Junkermann quickly fell to the back, and had to give up. He was not the only one: twelve riders fell ill and said 'bad fish' was the cause. Tour doctor Pierre Dumas realized they had all been given the same drug by the same soigneur.[19] Fourteen riders abandoned the Tour that day, including the former leader, Willy Schroeder, the 1960 winner Gastone Nencini and a future leader, Karl-Heinz Kunde.[13] Jacques Goddet wrote that he suspected doping but nothing was proven – other than that none of the hotels had served fish the previous night. The newspapers ridiculed the riders, and this made the riders furious. They threatened to strike, but the journalist Jean Bobet, a former cyclist, was able to talk them into continuing,[10] although Jean Bobet was one of the creators of film Vive Le Tour! which ridiculed the riders and their 'bad fish' explanation.

Although Anquetil was not leading the race, he was in a good position to win. He considered Bahamontes as his main threat in the Alps, because Bahamontes was a good climber, and had shown his excellent form in the time trial that he won. Before the Tour reached the alps, in the fourteenth stage, Anquetil lured Bahamontes into spending energy at the wrong time, and Bahamontes lost fifteen minutes in that stage. He was no longer a threat for the general classification, and Anquetil could focus on Planckaert, who still led the general classification.[11]

Important attacks were expected in stage 18 in the alps. Instead, the riders were going slow. In the first 4 hours, they only raced 100 km. Later, some attacks took place, but they failed for flat tires, and the defending tactics of the other riders. So in the end, Emile Daems, who was a sprinter and not a climber, was able to win this mountain stage.[10]

The nineteenth stage followed the same route as the 21st stage in the 1958 Tour de France, where Gaul had won the race. Poulidor's injured hand was better now, and his team manager Antonin Magne told him that the time was ready to attack. Poulidor was almost ten minutes behind in the general classification, so he would probably be allowed some freedom. Poulidor attacked, and stayed away alone, jumping to the third place in the general classification.[1][10] After that nineteenth stage, Belgian Jef Planckaert was still leading the race. In the time trial in stage 20, he lost considerable time, and Anquetil took over the lead.[1] Anquetil remained the leader until the end, and won his third Tour.[10]

There were three main individual classifications contested in the 1962 Tour, as well as a team competition. Two of them awarded jerseys to their leaders. The most important was the general classification, which was calculated by adding each rider's finishing times on each stage. The rider with the least accumulated time is the race leader, identified by a yellow jersey;[20] the winner of this classification will be considered the winner of the Tour.

In the points classification riders received points for finishing among the highest placed in a stage finish. The classification leader was identified by a green jersey.[20]

After each stage, a jury voted for the most aggressive cyclist of that stage. Those votes were added towards the combativity award,[21][22] which was won by Eddy Pauwels (Wiel's–Groene Leeuw).[12]