The 1981 Tour de France was the 68th edition of the Tour de France, taking place between 25 June and 19 July. The total race distance was 24 stages over 3,753 km (2,332 mi). It was dominated by Bernard Hinault, who led the race from the sixth stage on, increasing his lead almost every stage, and winning the race with a margin of almost 15 minutes. Only Phil Anderson was able to stay close to him, until the seventeenth stage when he lost 17 minutes.

Late 1980, there were plans to make the tour "open", which meant that amateur teams would also be allowed to join. This would make it possible for teams from Eastern Europe to join.[1] The plan did not materialize, so only professional teams were invited. In January 1981, the organisation decided that there would be 15 teams with 10 cyclists, or 16 teams with 9 cyclists each. At that point, 16 teams had already submitted a request to join, and the organisation was in discussion with four additional Italian teams, and the American national team.[2] In the end, the American team did not apply, and the Italian teams decided to focus on the 1981 Giro d'Italia. The organisation selected 15 teams, who each selected 10 cyclists, for a total of 150 participants.

The route for the 1981 Tour de France was revealed in December 1980.[7] Originally, the thirteenth stage was planned as a time trial, followed by a transfer of more than 500 km on the same day, with the fourteenth stage the next day as a mountain stage. A few months before the Tour, there were many teams interested in the Tour, and the Tour organisation was afraid that there would not be enough time on 9 July to have the time trial for that many cyclists, followed by the transfer. For this reason, the thirteenth stage was changed into a criterium, and the fourteenth stage became the time trial.[8] The 1981 Tour de France started on 25 June, and had two rest days, in Nantes and Morzine.[9] 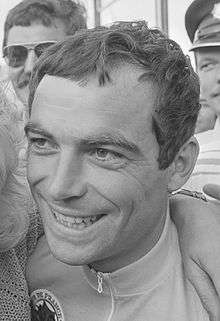 Bernard Hinault (pictured in 1982), winner of the general classification

Hinault started out strong and won the prologue. Freddy Maertens showed he was still able to win sprints by winning the first part of the first stage. The second part was a team time trial, won by Ti-Raleigh, which put Gerrie Knetemann in the lead of the race. Ti Raleigh also won the second team time trial in stage four.[5]

The Pyrenees were only briefly visited, in the fifth stage.[6] For the last mountain, Hinault was the lead group, together with Lucien Van Impe and Phil Anderson. Van Impe escaped in the last kilometers and won the stage, 27 seconds ahead of Hinault. Anderson, who finished in third place, became the new leader, the first Australian cyclist to wear the yellow jersey.[5] Anderson had started as domestique for Jean-René Bernaudeau, and nobody was expecting him to be able to follow Hinault.[13] In the time trial of stage six, Hinault won as expected, and became the race leader. Anderson surprised with a third place, and he now followed Hinault by 13 seconds in the general classification.

In the following stages, through Northern France and Belgium, Hinault slowly increased his margin over Anderson by winning amelioration sprints, until lead by 57 seconds after stage 13. In stage 14, Hinault won the time trial, and added two more minutes to the margin.

In the sixteenth stage in the Alps, Anderson was not able to follow anymore. He lost 4 minutes to Hinault, but stayed in second place. Anderson lost this second place in the 17th stage, where he lost 17 minutes, making Van Impe the new second placed cyclist, nine minutes behind. Hinault showed his dominance by winning the eighteenth stage.

The time trial in stage 20 was also won by Hinault, who increased the margin to Van Impe to more than 14 minutes.[3]

In the 16th stage, Claude Vincendeau was randomly selected to undergo a doping test. Vincendeau abandoned during that stage, and had already left to his hotel. One of the doctors then went to his hotel to obtain a urine sample, but Vincendeau was unable/unwanting to give it. This counted as a positive test.[14]

There were several classifications in the 1981 Tour de France, four of them awarding jerseys to their leaders. The most important was the general classification, calculated by adding each cyclist's finishing times on each stage. The cyclist with the least accumulated time was the race leader, identified by the yellow jersey; the winner of this classification is considered the winner of the Tour.[15] The time bonus for stage winners had been absent in the years before, but it returned in 1981;[3] 30, 20 and 10 seconds for the first three cyclists in every stage.[16]

Additionally, there was a points classification, were cyclists got points for finishing among the best in a stage finish, or in intermediate sprints. The cyclist with the most points lead the classification, and was identified with a green jersey.[15]

There was also a mountains classification. The organisation had categorized some climbs as either hors catégorie, first, second, third, or fourth-category; points for this classification were won by the first cyclists that reached the top of these climbs first, with more points available for the higher-categorized climbs. The cyclist with the most points lead the classification, and was identified with a polkadot jersey.[15]

For the team classification, the times of the best three cyclists per team on each stage were added; the leading team was the team with the lowest total time. The riders in the team that lead this classification wore yellow caps.[19]

The 1981 Tour de France is seen as the year in which the globalization of the Tour became important. Before that most cyclists came from France, Spain, Italy, Belgium, Luxemburg and the Netherlands, with only occasional successes by other European cyclists. Anderson was the first non-European cyclist to lead the Tour de France, and more would follow in the coming years.[22] The plans to make the Tour de France open to amateurs were not forgotten, and it happened in 1983.[23]

Anderson would again wear the yellow jersey in the next year, when he also won the young rider classification.

Hinault won five stages as reigning world champion. This had happened before, most recently in 1979 with Gerrie Knetemann and in 1980 with Jan Raas, but after 1981 it became a rare occurrence. The next time that this happened was in 2002 with Óscar Freire, and after that in 2011 with Thor Hushovd.[24]

Maertens who also won five stages would make his comeback year complete by winning the 1981 UCI Road World Championships later that year, but after that never reached his 1981 level again.

Jacques Boyer became the first American to ride in the Tour de France, acting as a domestique for Hinault.[25]