The 1969 Tour de France was the 56th edition of the Tour de France, one of cycling's Grand Tours. It took place between 28 June and 20 July, with 22 stages covering a distance of 4,117 km (2,558 mi). The participant teams were no longer national teams, but were once more commercially sponsored.

The 1969 race is unique in that it is the only time that a single cyclist has won not only the general classification, but the points classification and mountains classification as well. Eddy Merckx rode on the winning team, Faema, won the combination classification and the combativity award. Though not officially contested until 1975, Merckx would also have won the best young rider classification were it awarded, as he was 24 years old at the time of the race.

In 1967 and 1968, the Tour was contested by national teams, but in 1969 the commercially sponsored teams were back.[1] The Tour started with 13 teams, each with 10 cyclists:[1] Eddy Merckx had been removed from the 1969 Giro d'Italia in leading position because of a positive doping result, and was initially not allowed to join the 1969 Tour de France, but his suspension was later lifted.[1] 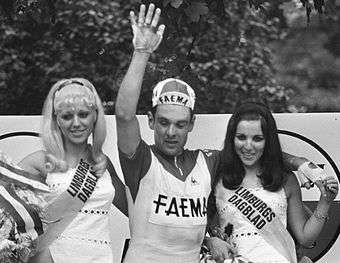 Julien Stevens after his win in Maastricht, Netherlands, on stage three

Rudi Altig won the prologue, where Merckx finished second. In the team time trial in the second part of the first stage, Merckx's team won, and this gave Merckx the lead.

In the second stage, a group escaped, with Merckx's team mate Julien Stevens as highest-ranked cyclist. There were no dangerous competitors in the escape, so Merckx did not chase them. The group stayed away, and Stevens took over the lead, with Merckx in second place.

In the fourth stage, Rik Van Looy escaped, because he wanted to show himself, such that he would be selected for the Belgian squad for the 1969 UCI Road World Championships.[5] Van Looy quickly took several minutes, and became the virtual leader of the race. With less than 40 km to go, Stevens tried to defend his lead by attacking. He was followed by a group of cyclists, including René Pijnen, one of Van Looy's team mates. Pijnen was trying to stop the chase, and this angered the other cyclists in the group. The group nonetheless was able to reduce the margin to less than a minute, and Stevens conserved his lead.[5]

In the fifth stage, Stevens was not able to stay in the first group. Désiré Letort, who had joined Stevens in the chase the previous stage, became the new leader, 9 seconds ahead of Merckx.

The first mountains showed up in the sixth stage, with a mountain finish on the Ballon d’Alsace. Merckx won convincingly: Galera was second after 55 seconds, Altig after almost two minutes, and the next cyclist came after more than four minutes. Because Letort was more than seven minutes behind, Merckx was now the leader, with Altig in second place, more than two minutes behind.

Merckx won the short time trial in stage 8, but only gained two seconds on Altig. In the ninth stage, Roger Pingeon and Merckx were away, with Pingeon winning the sprint. Altig lost almost eight minutes, and was out of contention. The second place was now taken by Pingeon, more than five minutes behind.

By then, his victory was almost sure, he just had to make sure that he stayed with his competitors. But in the seventeenth stage, Merckx did more than that, and got away alone, going solo for more than 140 km. By the finish, he had a margin of almost eight minutes on a group of seven cyclists, and the next cyclists were almost fifteen minutes away. Merckx had increased his margin to more than sixteen minutes. By winning the final time trial, he increased it to almost eighteen minutes.

After the doping-incident with Merckx in the 1969 Giro, the rules for doping offences were changed: riders were no longer removed from the race, but were given a penalty of fifteen minutes in the general classification.[6]

After every stage in the 1969 Tour, three cyclists were tested. These were either the first three of the stage, the first three in the general classification, or three randomly selected cyclists.[6]

Nijdam, Timmerman and Altig requested their B samples to be tested, but they also returned positive. Altig, Guyot and Matignon were given the time penalty of fifteen minutes; Nijdam and Timmerman had already left the race when the results came out.[8]

There was also a mountains classification. The organisation had categorized some climbs as either first, second, third, or fourth-category; points for this classification were won by the first cyclists that reached the top of these climbs first, with more points available for the higher-categorized climbs. The cyclist with the most points lead the classification, but was not identified with a jersey in 1969.[9]

For the team classification, the times of the best three cyclists per team on each stage were added; the leading team was the team with the lowest total time. The riders in the team that lead this classification wore yellow caps.[12]

The combativity award was given to Eddy Merckx.[2]