The 1986 Tour de France was the 73rd running of the Tour de France, one of cycling's Grand Tours. The Tour consisted of 23 stages, beginning with a prologue in Boulogne-Billancourt, Paris, on 4 July, and concluded on the Champs-Élysées in Paris on 27 July. This year had the first American cycling team, 7-Eleven, in Tour's history. The race was organised by the Amaury Sport Organisation, was shown on television in 72 countries, with the total viewers estimated at one billion.[1]

Following the success of Bernard Hinault in the previous edition, the La Vie Claire team was heavily favored. Hinault promised to return Greg LeMond's support to win the 1985 Tour, however, continuing attacks cast doubt on Hinault's sincerity. He claimed that his tactics were simply to wear down LeMond's (and his) opponents and that he ultimately knew that LeMond would be the winner because of time losses earlier in the race. Regardless of his true motives, this tactic worked well, and rivals Laurent Fignon of Système U and Carrera–Inoxpran's Urs Zimmermann were put on the defensive from the first day. Fignon quit the race due to injuries aggravated by stress.

The ascent of the legendary Alpe d'Huez gave spectators a spectacular stage in which Hinault made a suicidal solo attack to demoralize the opposition, to be matched only by LeMond at the top. In a gesture of respect, the two riders reached the top hand-in-hand, beaming smiles, and LeMond let Hinault finish first to claim the stage. However, within hours LeMond and Hinault were interviewed together on joint television, where Hinault stated that the race was not over, seemingly betraying his teammate LeMond. He went on to say that they would let the final time trial determine the winner.

7-Eleven became the Tour's first team from the United States, with a squad consisting of eight Americans, one Canadian and one Mexican.[8][3] Jim Ochowicz, 7-Eleven's founder and manager, met with the Amaury Sport Organisation (ASO) and persuaded them to invite his team. In the Spring, the team withdrew from competition in Europe (missing the opportunity to become the first American team in the history of the Vuelta a España) due to the United States conflict with Libya, losing out on much needed competitive racing unavailable in the United States.[9]

The teams entering the race were:[3]

Bernard Hinault, winner of the 1985 Tour de France, had promised to support his teammate Greg LeMond, who had finished second in 1985. After their domination in 1985, their La Vie Claire team was the clear favourite.[10] Before the start of the event, Hinault announced it would be his last Tour de France of his career.[11] Past winner Laurent Fignon was working on his comeback, for the Système U team.[12] Juan Mora of El País believed that the race would be highlighted by a duel between Fignon and Hinault.[5] He named LeMond and Frenchman Charly Mottet as potential contenders if their team captains – Hinault and Fignon, respectively – fail to perform to the level expected.[5] Mora believed Pedro Delgado to be the best Spanish contender for the overall title citing that his PDM–Concorde should perform well in the team time trial.[5] Gian Paolo Ormezzano of La Stampa believed that there was no Italian rider competing that could be a legitimate threat to win the race, despite the fact that three Italian based teams were invited – the most since the 1979 edition.[13] Ormezzano also thought the favorites going into the race were Hinault and Fignon.[13]

Tour director Levitan felt after the 1985 Tour de France that the race had been too easy, and made the course in 1986 extra difficult, including more mountain climbs than before. This angered Hinault, who threatened to skip the 1986 Tour.[15] Before the race started an avalanche caused a large amount of dirt and rock to be deposited on the slopes of the Col du Tourmalet, which caused Goddet to consider crossing the Col d'Aubisque instead.[5] 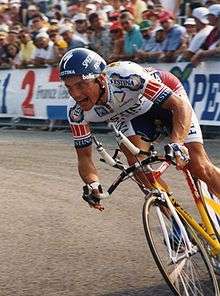 Système U rider Thierry Marie (pictured in 1993) won the opening prologue, taking the lead of the 1986 Tour.

The prologue was won by Thierry Marie, with Hinault in second place, just two seconds slower.[12] Marie lost the lead in the first stage to Alex Stieda, thanks to bonus time that Stieda won in intermediate sprints.[12]

Stieda tried to defend the lead in the second stage, a team time trial, but lost time when his team mate Eric Heiden crashed, and Marie was back in the lead.[12]

The following stages were flat. Although the lead changed several times (first to Dominique Gaigne, then to Johan van der Velde and later to Jørgen V. Pedersen), there were no significant time differences between the favourites. The first test for them was the ninth stage, an individual time trial. Won by Hinault, it put him in third place, 49 seconds in front of LeMond, who had suffered from a flat tire.[12]

Stages 12 and 13 were in the Pyrenees. In the 12th stage, Hinault and his team mate Jean-François Bernard were in front together with Pedro Delgado. LeMond was part of the chasing group, but because he was part of the same team as Hinault and Bernard, he did not help with the chase. Only at the last part of the stage, LeMond escaped from that group, taking only Luis Herrera with him, but by then he was already four minutes behind on the stage. Hinault let Delgado win the stage, but Hinault became the new leader in the general classification, with LeMond in second place, five minutes behind.[12]

In the thirteenth stage, Hinault attacked again, on the Tourmalet, the first of the four big climbs. LeMond was in the same situation as the day before: he had the power to do more, but did not want to chase his team mate. Hinault extended his lead to almost three minutes at the start of the Col d'Aspin. But Hinault was getting tired, and was caught by a small group (including LeMond) on the Peyresourde, the third climb of the day. On the final climb of the day, to Superbagnères, Hinault attacked again. This time, he was quickly caught, and some time later, Andrew Hampsten (from the same team as Hinault and LeMond) attacked. Hampsten was joined by LeMond, and Hampsten paced LeMond as far as he could, and then LeMond left on his own for the stage victory. On these final kilometres, Hinault lost several minutes to LeMond, and at the end of the stage, Hinault was still leading the general classification, but only 40 seconds in front of LeMond.[12]

In stages 14 to 16, travelling from the Pyrenees to the Alps, there were no important changes in the general classification. 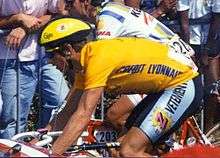 La Vie Claire's Greg LeMond (pictured in 1990) lead the GC from the stage 17 until the conclusion of final 23-stage race.

In stage 17, in the Alps, Urs Zimmermann (third in the general classification) attacked in the climb of the Col d'Izoard. LeMond followed him, leaving Hinault behind. The stage was won by Eduardo Chozas; LeMond kept following Zimmermann until the finishline, and Hinault lost three minutes to them. This made LeMond the new leader of the race, with Zimmermann in second place, and Hinault third.[12]

In the 18th stage, Hinault attacked several times, but every time he was rejoined by LeMond and others. After an attack on the Col du Télégraphe, Zimmermann was unable to follow. LeMond and Hinault only had Steve Bauer and Pello Ruiz-Cabestany with them, but on the climb of the Croix de Fer, they could not follow so it was just LeMond and Hinault. They stayed together until the finish, where LeMond allowed Hinault to win. The margin with Zimmermann (third to finish on that stage) was more than 5 minutes, and it was clear that Zimmermann could no longer win the Tour.[12]

Hinault still had a small chance of beating his teammate LeMond. One of those chances was in the individual time trial in stage 20. Halfway through his race, LeMond fell, and had to change bikes after the fall, losing time in that way. Hinault won the stage, beating LeMond by 25 seconds.[12]

Stage 21 was the last mountainous stage of the Tour. On the final climb, LeMond was able to leave Hinault behind, and increased his lead to more than three minutes.[12]

After that, the final classification was settled. On the last stage of the Tour, LeMond crashed and needed a new bike; his teammates (including Hinault) waited for him, and escorted him back to the other riders. Hinault joined the sprint for the final stage victory, but finished in fourth place, beaten by Guido Bontempi.

LeMond won the general classification ahead of Hinault.

Before the race, Hinault had promised to help LeMond win the Tour. After the race, when he was reminded of that promise, Hinault said that the many attacks that he made were not against LeMond, but against his competitors.[12]

Hinault retired shortly after the Tour. LeMond could not defend his Tour victory in the 1987 Tour de France, because he was badly injured in a shooting accident in early 1987. He recovered for a few years, but came back to win the 1989 and 1990 tours.