The 1968 Tour de France was the 55th edition of the Tour de France, one of cycling's Grand Tours. It took place between 27 June and July 21, with 22 stages covering a distance of 4,492 km (2,791 mi). Eleven national teams of 10 riders competed, with three French teams, two Belgian teams and one from Germany, Spain, the United Kingdom, Italy, the Netherlands, and a combined Swiss/Luxembourgian team.

The 1968 Tour marked the first time the race end at the Vélodrome de Vincennes taking covering a distance of for the now-defunct Parc des Princes Velodrome, which served as the final stop from 1904 to 1967. The general classification was won by Jan Janssen, who overtook Herman Van Springel in the final time trial. 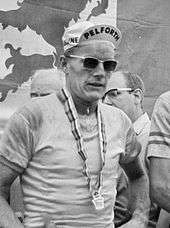 Jan Janssen (pictured in 1967), winner of the general classification

In the fifteenth stage, Raymond Poulidor was hit by a motor and had to give up. The Tour ended with a time trial, and before the time trial, Herman Van Springel was leading, followed by San Miguel at 12 seconds, Janssen at 16 seconds and Bitossi at 58 seconds. Janssen won the final time trial, with Van Springel in second place, but the margin was large enough for Janssen to win the Tour.[1]

Both were removed from the race, suspended for one month and given a fine.

For the team classification, the times of the best three cyclists per team on each stage were added; the leading team was the team with the lowest total time. The riders in the team that lead this classification wore yellow caps.[12] The Switzerland/Luxembourg team finished with only two cyclists.

The combativity award was given to Roger Pingeon.[2]

It was the last edition in which the cyclists participated in national teams; from 1969 on, commercial teams were used.