Lucien Van Impe, the winner of the previous year, wanted to repeat his victory. The main challenge came from Hennie Kuiper and Bernard Thévenet. Thévenet won with the smallest margin since the 1968 Tour de France.[1]

To ride the Tour, teams had to pay money. The other Grand Tours, the Giro d'Italia and the Vuelta a España, paid the teams money to start. For financial reasons, some teams chose to avoid the Tour, and only 100 cyclists started the race, divided in ten teams of ten cyclists each. One of the notable absentees was Michel Pollentier.[2]

The teams entering the race were:[1]

Bernard Thévenet, the winner of 1975, was considered the main favourite, because the course of the race was considered suited to his talents. In March 1977, Thévenet had been penalized for a positive doping test in Paris–Nice.[3]

The winner of the 1976 edition, Lucien Van Impe, was specialized in climbing, so his chances in the 1977 edition with less mountains were slimmer. Two other contenders were team mates Raymond Delisle and Joop Zoetemelk, fourth and second in the 1976 edition. Hennie Kuiper, the reigning world champion, was also a favourite.[3]

Five-time winner Eddy Merckx was also competing, and was still considered an outsider for the victory, but he was no longer as dominant as before.

The 1977 Tour de France started on 30 June, and had two rest days, in Bordeaux and Freiburg.[4] The 1976 Tour had been focused around the mountains, with five hilltop finishes. In 1977, the climbing was de-emphasized, with only two hilltop finishes, and more emphasis on the time trials.[3]

The first stage from Fleurance to Auch was split in two parts: 140 km from Fleurance to Lectoure, directly followed by 97 km from Lectoure to Auch.[5] It was the first time a "flying stage" was used. It stage was split in two parts, but there was no stop in between. After the riders reached the finish line of the first part, they immediately continued for the next part; if a group was ahead of the rest, they kept this advantage. The first riders to reach the finish of the flying stage were given prizes and points for the points classification as if it was a normal stage; the general classification was not changed.[6] 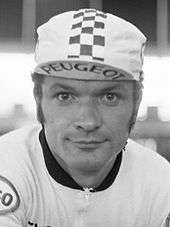 Bernard Thévenet (pictured in 1978), winner of the general classification

The prologue was won by Dietrich Thurau, who made his debut in the Tour. Thurau wanted to be the leader when the Tour would enter his native Germany in stage 13. In the second stage, big mountains were scheduled, unusually early in the race, and Thurau saw this as the biggest threat to this goal. When Van Impe, Thevenet and Kuiper were away leaving Thurau behind, Thurau worked together with Merckx, and they were able to get reach the leaders, and Thurau was able to win the sprint.[3] The second part of the fifth stage was a time trial. Eddy Merckx, at that moment only 8 seconds behind Thurau, was expected to win enough time on Thurau to become the new leader, but surprisingly Thurau won the time trial, and extended his lead.[3]

Thurau was able to keep control of the race for the next stages, and when the Tour entered Germany, he was still leading the race, 51 seconds ahead of Merckx.[3] The second part of the fifteenth stage was an individual mountain time trial, won by Zoetemelk. It was later revealed that Zoetemelk failed a doping test on that stage, so he was given a penalty of 10 minutes.[9] Second placed Van Impe was declared the winner of the stage in his stead. Thevenet became second in the stage, and took over the lead in the general classification, 11 seconds ahead of Thurau now in second place.[3] Thurau was initially dropped in the sixteenth stage, but fought his way back to the main group, and won the sprint.

In the seventeenth stage, Van Impe attacked. Van Impe was only 33 seconds behind in the general classification, so was a direct threat to Thevenet. Thevenet chased him, followed by Kuiper and Zoetemelk, who let Thevenet do all the work. Van Impe was then hit by a television car, and needed a new rear wheel. While he was waiting for this, Kuiper escaped and passed Van Impe, followed by Thevenet. Kuiper won the stage, and decreased his margin to Thevenet to 8 seconds. Thevenet was angry at Zoetemelk and Kuiper for having him do the chase on Van Impe. The riders had gone so fast on that stage, that 30 cyclists finished outside the time limit, and were expelled from the race.[3]

The eighteenth stage was initially won by Agostinho, but he failed the doping test. The second placed cyclist, Menendez, also failed the doping test. The third placed cyclist was Merckx, but he had not been tested, so could not be given the stage victory. As a result, nobody is credited as the stage's winner. At that point, there was only serious opportunities for Kuiper to win back time on Thevenet, the time trial of stage 20. Instead of winning back time, Kuiper lost 28 seconds, and only bad luck could stop Thevenet from winning the race.[3]

The last stages went without problems for Thevenet. The final time trial was won by Thurau, who thus won five stages in his debut Tour. Thevenet won some more seconds on Kuiper, and ended only 48 seconds ahead of Kuiper, the smallest margin since 1968.[1]

Every day, five cyclists were tested for doping: the leader in the general classification, the winner of the stage, the runner-up of the stage, and two randomly selected cyclists, for a total of 110 tests.[10] Six cyclists tested positive for doping:[11]

Sebastien Pozo was unable to provide urine within two hours for the doping control after the prologue, which is treated as a positive result.[10]

All were fined with 1000 Swiss Francs, received one month of provisional suspension, were set back to the last place in the stage and penalized with 10 minutes in the general classification.[12]

Directly after the Tour, there were rumours about Thevenet and Kuiper having used doping. The Tour officials came together, and made a statement that Thevenet was officially the winner of the Tour. Some months later, when Thevenet was in hospital, he admitted having used cortisone. His popularity plunged after that, and Thevenet was never again able to compete for the general classification.[9]

Additionally, there was a points classification, where cyclists got points for finishing among the best in a stage finish, or in intermediate sprints. The cyclist with the most points lead the classification, and was identified with a green jersey.[14]

There was also a mountains classification. The organisation had categorized some climbs as either first, second, third, or fourth-category; points for this classification were won by the first cyclists that reached the top of these climbs first, with more points available for the higher-categorized climbs. The cyclist with the most points lead the classification, and was identified with a polkadot jersey.[14]

For the team classification, the times of the best three cyclists per team on each stage were added; the leading team was the team with the lowest total time. The riders in the team that lead this classification wore yellow caps.[17]

The combativity award was given to Gerrie Knetemann.[4]