The UCI had also introduced a rule that limited the number of cyclists in a race to 200. In 1987, the Tour had started with 207 cyclists, so because of this rule, the number of teams in the 1988 Tour was reduced from 23 to 22, of 9 riders, a total of 198.[1] 22 teams were announced two weeks before the Tour.[1][2] The Tour organisation named three reserve teams, in case one of the 22 teams was unable to start: Postobón–Ryalco, Roland–Colnago and TVM–Van Schilt.[1]

The teams entering the race were:[2]

The winner of the 1987 Tour de France, Stephen Roche, was unable to defend his title as he was coming back from knee surgeries. The winner from 1986, Greg LeMond, had still not fully recovered from the hunting accident that caused him to miss the 1987 Tour, and did not start this Tour.[3] Remaining favourites were Pedro Delgado, who had finished in second place in 1987, and Andy Hampsten, the winner of the 1988 Giro d'Italia, several weeks before the Tour.[3]

The Union Cycliste International (UCI) introduced the rule that a cycling race could not span three weekends. The Tour de France could therefore only start on Monday 4 July, and the prologue was removed. The Tour organisers were not happy with this, and they extended the Tour by adding a 'prelude' or 'preface' to the race, circumventing the rule by making it unofficial. Each team would ride for 3.8 kilometres (2.4 mi), and one cyclist per team would then finish one kilometer on his own. The recorded times were not used for the rest of the Tour, but the cyclist with the fastest time would wear the yellow jersey in the next stage.[4]

The total length of this Tour was 3,286 kilometres (2,042 mi), which was the shortest since 1906.[3] Since 1910, Belgian cyclists had won at least one stage in every Tour, but in 1988 they did not win any stages.[3] There was one rest day, during which the cyclists were transferred from Villard-de-Lans to Blagnac.[5] 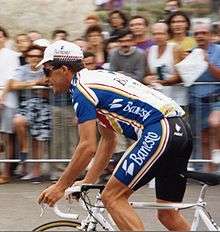 Pedro Delgado (pictured at the 1993 Tour), winner of the general classification

The prelude was won by Guido Bontempi, and the first official stage was won by Steve Bauer. Bauer lost the lead in the next stage, a Team Time Trial, to Teun van Vliet.[3] The favourites for the overall victory did not lose time in the first stages. The individual time trial of stage six did not change that, although some outsiders (Sean Kelly and Laurent Fignon) lost two minutes.[3]

In the eleventh stage, in hilly conditions, the first serious attacks were seen. Most contenders were able to stay in the main group, but Laurent Fignon and Jean-François Bernard lost a lot of time and were no longer seen as contenders.[3] The twelfth stage included higher climbs. Delgado escaped on the climb of the Glandon, and he was joined by Steven Rooks. On the descent, they were joined by Gert-Jan Theunisse and Fabio Parra; the other cyclists were unable to get to them. Close to the finish, Rooks escaped and won the stage, and Delgado became the new leader of the general classification.[3] Delgado won the next stage, an uphill individual time trial, and solidified his lead.[3]

In the fourteenth stage, the favourites stayed together, and other cyclists were allowed to go for the stage victory. Philippe Bouvatier and Robert Millar,[8] who had led over the previous two cols, were in the uphill sprint to win, until Bouvatier allowed himself to be misdirected by a gendarme 200 metres before the finish (at the point where the team cars were separated from the cyclists)[9] followed by Millar, and the victory went to Massimo Ghirotto. Ghirotto offered his prize (a new car) to Bouvatier[3] though Millar maintained he would have overhauled Bouvatier to win[10] and told CyclingNews in 2010 that "I don't know if the gendarme was to blame, I don't think he was, I know I would have come round Bouvatier in the sprint but then I ought to have dropped him before we got to that stage".[11]

In the fifteenth stage, Delgado increased his lead. He let Laudelino Cubino get away and claim the victory, because Cubino was no threat for the general classification, and finished in third place, gaining time on all his direct competitors.[3] Delgado further increased his lead in the nineteenth stage, by leaving his the other cyclists behind him on the final climb of the day.[3] Delgado was aiming to win the twenty-first stage, an individual time trial, and was leading at all the intermediate check points, but lost time in the final part of the stage, finishing in fourth place. This was more than enough to secure the overall victory.[3]

During the race, it was announced that doping tests of Pedro Delgado and Gert-Jan Theunisse indicated they had used doping products.

In Delgado's case, it was probenecid. Promenicid was a doping product according to the International Olympic Committee not yet on the doping list of the Union Cycliste Internationale (UCI), so Delgado was not sanctioned, and he remained the winner of the Tour.[5] Tour director Louy tried to convince Delgado to leave the race voluntarily, but Delgado refused.[12] Delgado admits that he took probenecid, but with the intention to assist the kidneys, not to mask anabolic steroids.[13]

Theunisse was found to have a high testosterone-level, which was on the UCI doping list. Theunisse received a penalty of ten minutes, which dropped him from fifth place to eleventh place in the general classification.[14]

One other cyclist was penalized during this Tour: Spanish cyclist Roque de la Cruz failed a doping test after the sixth stage, and was given the same penalty as Theunisse.[15]

In 2013, a notebook from the team doctor of the PDM team showed that all but one of the PDM cyclist were given doping in the 1988 Tour de France.[16]

The owners of the Tour de France thought that director Louy had handled the Delgado affair in the wrong way, and they fired him later that year. They appointed Jean-Marie Leblanc as his replacement.[12]

Additionally, there was a points classification, where cyclists were given points for finishing among the best in a stage finish, or in intermediate sprints. The cyclist with the most points lead the classification, and was identified with a green jersey.[17]

There was also a mountains classification. The organisation had categorized some climbs as either hors catégorie, first, second, third, or fourth-category; points for this classification were won by the first cyclists that reached the top of these climbs first, with more points available for the higher-categorized climbs. The cyclist with the most points lead the classification, and was identified with a polkadot jersey.[17]

For the combativity award classification, a jury gave points after each stage to the cyclists they considered most combative. The cyclist with the most votes in all stages lead the classification.