The race was dominated by the Renault team, who won the team classification and ten stages:[1] Renault's French rider Laurent Fignon won his second consecutive Tour, beating former teammate Bernard Hinault by over 10 minutes. Hinault was pursuing his fifth Tour victory after having sat out the 1983 Tour because of injuries. Also that year, Fignon's team-mate Greg LeMond became the first American rider to finish in the top three and stand on the podium, and he also took the young rider classification. Belgian cyclist Frank Hoste won the points classification, and British Robert Millar won the mountains classification. The race consisted of 23 stages, totaling 4,020 kilometers (2,500 mi).

There was room for 18 teams in the 1984 Tour de France; in early 1984, there were 17 candidate teams. Although the Tour organisation approached AVP–Viditel and Metauromobili, an 18th team was not added.[2] The 1984 Tour started with 170 cyclists, divided into 17 teams of 10 cyclists.[3]

The teams entering the race were:[3] 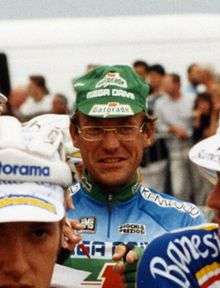 Laurent Fignon (pictured at the 1993 Tour), winner of the general classification

The 1984 Tour de France was a battle between reigning champion Fignon and his former team captain Hinault. Questions had been raised about the strength of Fignon's 1983 win due to Hinault's absence and Pascal Simon's withdrawal after breaking his shoulder whilst wearing the yellow jersey.[1] Hinault won the prologue, but Fignon won back time when his team won the team time trial in stage three.[8] After a large escape in the fifth stage, Fignon's team mate Vincent Barteau was leading the race. In the seventh stage, Fignon won the time trial, beating Hinault by 49 seconds.[9] Barteau was still leading the race, and remained the leader after the Pyrenées.

In the sixteenth stage, Fignon again beat Hinault in a time trial, this time winning 33 seconds.[10] In the seventeenth stage, Hinault attacked five times on the penultimate climb, but every time Fignon was able to get back. Then, Fignon left Hinault behind, and won almost three more minutes on Hinault. Barteau was so far behind in this stage, that Fignon became the new leader.[11] Fignon won three more stages, for a total of five that year, and won the Tour with a ten-minute margin. With his air of indifference in interviews and his crushing dominance, he was hailed as France's newest superstar.

Additionally, there was a points classification, where cyclists were given points for finishing among the best in a stage finish, or in intermediate sprints. The cyclist with the most points lead the classification, and was identified with a green jersey.[12]

There was also a mountains classification. The organisation had categorized some climbs as either hors catégorie, first, second, third, or fourth-category; points for this classification were won by the first cyclists that reached the top of these climbs first, with more points available for the higher-categorized climbs. The cyclist with the most points lead the classification, and was identified with a polkadot jersey.[12]