Saint-Riquier is a commune in the Somme department in Hauts-de-France in northern France.

The commune is situated 6 kilometres (4 mi) northeast of Abbeville, on the D925 and D32 crossroads.

Saint-Riquier (originally Centula or Centulum ) was famous for its abbey, founded about 625 by Riquier (Richarius), son of the governor of the town. It was enriched by King Dagobert I and prospered under the abbacy of Angilbert, son-in-law of Charlemagne. The 18th century buildings are occupied by an ecclesiastical seminary. The church is a magnificent example of Flamboyant Gothic architecture of the 15th and 16th centuries, and has a richly sculptured front on the west, surmounted by a square tower. In the interior the fine vaulting, the Renaissance font and carved stalls, and the frescoes in the treasury are especially noteworthy. Among other valuable relics, the treasury possesses a copper cross said to be the work of Saint Eloi (Eligius).

The abbey was part of the diocese of Amiens in Ponthieu. The early counts of Ponthieu originally were styled advocatus of the abbey of Saint Riquier and "castellan" of Abbeville. The counts of Ponthieu enrolled their sons, who were going into religion at the abbey. Count Enguerrand I placed his sons, Fulk, later abbot of Forest-l'Abbaye, and Guy, later the bishop of Amiens, in Saint Riquier for their education. Their teacher was abbot Enguerrand "the Wise" (d. 9 December 1045), under whose rule Saint Riquier enjoyed its "golden age." The abbey held estates in Norfolk, England.

In 1536 Saint-Riquier repulsed an attack by the Germans, during its defense the women especially distinguishing themselves. In 1544 it was burned by the English, an event that marks the beginning of its decline. 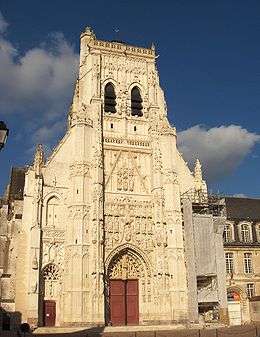