Independence is known as the "Queen City of the Trails"[8] because it was a point of departure for the California, Oregon and Santa Fe Trails. Independence was also the hometown of U.S. President Harry S. Truman; the Truman Presidential Library and Museum is located in the city, and Truman and First Lady Bess Truman are buried here. The city is also sacred to many Latter Day Saints, with Joseph Smith's 1831 Temple Lot being located here, as well as the headquarters of several Latter Day Saint factions.

Independence was originally inhabited by Missouri and Osage Indians, followed by the Spanish and a brief French tenure. It became part of the United States with the Louisiana Purchase of 1803. Lewis and Clark recorded in their journals that they stopped in 1804 to pick plums, raspberries, and wild apples at a site that would later form part of the city.

Named after the Declaration of Independence, Independence was founded on March 29, 1827,[9] and quickly became an important frontier town. Independence was the farthest point westward on the Missouri River where steamboats or other cargo vessels could travel, due to the convergence of the Kansas River with the Missouri River approximately six miles west of town, near the current Kansas-Missouri border. Independence immediately became a jumping-off point for the emerging fur trade, accommodating merchants and adventurers beginning the long trek westward on the Santa Fe Trail. 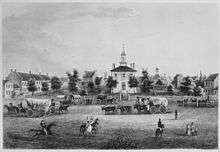 Engraving of the Courthouse in Independence, 1855

In 1831, members of the Latter Day Saint movement began moving to the Jackson County, Missouri area. Shortly thereafter, founder Joseph Smith declared a spot west of the Courthouse Square to be the place for his prophesied temple of the New Jerusalem, in expectation of the Second Coming of Christ. Tension grew with local Missourians until the Latter Day Saints were driven from the area in 1833, the beginning of a conflict which culminated in the 1838 Mormon War. Several branches of this movement gradually returned to the city beginning in 1867, with many making their headquarters there. These include the Community of Christ (formerly the Reorganized Church of Jesus Christ of Latter Day Saints), the Church of Christ (Temple Lot), the Church of Jesus Christ (Cutlerite) and the Restoration Branches.

Independence saw great prosperity from the late 1830s through the mid-1840s, while the business of outfitting pioneers boomed. Between 1848 and 1868, it was a hub of the California Trail. On March 8, 1849, the Missouri General Assembly granted a home-rule charter to the town and on July 18, 1849, William McCoy was elected as its first mayor. In the mid-19th century an Act of the United States Congress defined Independence as the start of the Oregon Trail.

A map of the Oregon Trail, marking Independence. 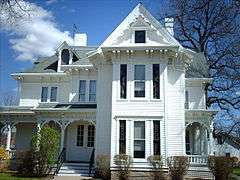 Independence saw two important battles during the Civil War: the first on August 11, 1862 when Confederate soldiers took control of the town, and the second in October 1864, which also resulted in a Southern victory. The war took its toll on Independence and the town was never able to regain its previous prosperity, although a flurry of building activity took place soon after the war. The rise of nearby Kansas City also contributed to the town's relegation to a place of secondary prominence in Jackson County, though Independence has retained its position as county seat to the present day.

United States President Harry S. Truman grew up in Independence, and in 1922 was elected judge of the county Court of Jackson County, Missouri (an administrative, not judicial, post). Although he was defeated for reelection in 1924, he won back the office in 1926 and was reelected in 1930. Truman performed his duties diligently, and won personal acclaim for several popular public works projects, including an extensive series of fine roads for the growing use of automobiles, the building of a new County Court building in Independence, and a series of 12 Madonna of the Trail monuments to pioneer women dedicated across the country in 1928 and 1929. He would later return to the city after two terms as President. His wife, First Lady Bess Truman, was born and raised in Independence, and both are buried there. The Harry S. Truman National Historic Site (Truman's home) and the Harry S. Truman Presidential Library and Museum are both located in Independence, as is one of Truman's boyhood residences.

There were 48,742 households of which 29.3% had children under the age of 18 living with them, 42.5% were married couples living together, 13.9% had a female householder with no husband present, 5.4% had a male householder with no wife present, and 38.1% were non-families. 31.7% of all households were made up of individuals and 11.5% had someone living alone who was 65 years of age or older. The average household size was 2.37 and the average family size was 2.97. 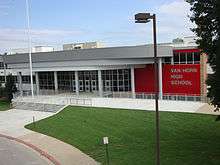 Photograph of Van Horn High School in Independence, MO after the 2011 renovation.

Prior to Fall 2008, parts of western Independence in the Van Horn feeder pattern resided in the Kansas City, Missouri School District,[16] but all of these students are now part of the Independence school district.

The Community of Christ has built a temple in Independence, and also maintains a large auditorium and other buildings nearby. The Church of Jesus Christ of Latter-day Saints operates a sizable visitors' center adjacent to the Community of Christ Temple, and across the street from the original Temple Lot designated by Joseph Smith in 1830. The Lot itself is occupied by a small white-frame church building that serves as the headquarters and local meeting house for the Church of Christ (Temple Lot).

There are five Catholic churches and several Episcopal churches in Independence.

One of the oldest churches in Independence is the First Presbyterian Church, founded in 1826.[17] It was here in 1890 that Harry Truman saw Elizabeth (Bess) Wallace.[17][18] Truman eventually married her after his return from World War I in 1919.[18]

Santa-Cali-Gon Days is an annual Labor Day festival held in Independence intermittently since 1940 and continuously since 1973, celebrating the city's heritage as a starting point of three major frontier trails: the Santa Fe, California and Oregon. Another popular annual festival is the Vaile Strawberry Festival, which is held on the first Saturday of June at the Vaile Mansion, 1500 N. Liberty, five blocks north of the historic Square. The Independence Heritage Festival is a celebration of the diverse culture that exist in Independence. The Independence town square features numerous family-owned shops surrounding the old main courthouse in Independence, which was modeled after Philadelphia's Independence Hall. This courthouse houses Harry S. Truman's former courtroom and office.

Blue River Community College features a soccer program with a men's team and women's team. The Trailblazers (men) went all the way to the NJCAA Region 16 semifinals before concluding their season. The Lady Trailblazers (women) finished as runners up in the region. The Independence Events Center is home of the Missouri Mavericks, a Central Hockey League mid-level professional hockey team. Independence Events Center also the home of Missouri Comets of the Major Arena Soccer League the top level of professional indoor soccer. Crysler Stadium is the home of the collegiate summer baseball Independence Veterans of the Mid-Plains League.

YMCA and Parks and Recreation have programs for various sports for all people.

Independence has the following Sister city:

There is a street in Independence south of Truman Rd. between Memorial Dr. and Lynn St. (between City Hall and the Independence Square, west of Noland Rd.) called Higashimurayama.

Independence Power & Light (IPL) is a local electric power plant owned and operated by the city. It was established in 1901 and has undergone many changes and upgrades. One change was moving from the old Dodgion Street plant (where the Roger T. Sermon Center stands now) to the Blue Valley Plant near Truman Rd. and MO-78/Lake City-Buckner Rd. IPL also draws power from other sources: the Missouri City Power Plant, and the Kansas City Power and Light Company (KCP&L), through several 69 and 161 kilovolt transmission interconnections. IPL has an "Out of Sight" power line burial program. After signing an agreement with TradeWind Energy in July, 2008, IPL will begin purchasing annually 15 megawatts of renewable energy from the Smoky Hills Wind Farm (a wind turbine facility) in Kansas.