The first session of Congress, known as the "Hundred Days", took place before the regular seating and was called by President Roosevelt specifically to pass two acts: 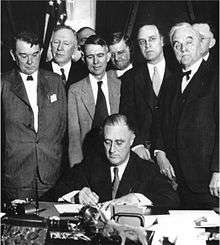 The session also passed several other major pieces of legislation:

The Senate Munitions Committee came into existence solely for the purpose of this hearing. Although World War I had been over for sixteen years, there were revived reports that America's leading munition companies had effectively influenced the United States into that conflict, which killed 53,000 Americans, hence the companies' nickname "Merchants of Death."

The Democratic Party, controlling the Senate for the first time since the first world war, used the hype of these reports to organize the hearing in hopes of nationalizing America's munitions industry. The Democrats chose a Republican renowned for his ardent isolationist policies, Senator Gerald P. Nye of North Dakota, to head the hearing. Nye was typical of western agrarian progressives, and adamantly opposed America's involvement in any foreign war. Nye declared at the opening of the hearing "when the Senate investigation is over, we shall see that war and preparation for war is not a matter of national honor and national defense, but a matter of profit for the few."

Over the next eighteen months, the "Nye Committee" (as newspapers called it) held ninety-three hearings, questioning more than two hundred witnesses, including J.P. Morgan, Jr. and Pierre du Pont. Committee members found little hard evidence of an active conspiracy among arms makers, yet the panel's reports did little to weaken the popular prejudice against "greedy munitions interests."

The hearings overlapped the 73rd and 74th Congresses. They only came to an end after Chairman Nye provoked the Democratic caucus into cutting off funding. Nye, in the last hearing the Committee held in early 1936, attacked former Democratic President Woodrow Wilson, suggesting that Wilson had withheld essential information from Congress as it considered a declaration of war. Democratic leaders, including Appropriations Committee Chairman Carter Glass of Virginia, unleashed a furious response against Nye for "dirtdaubing the sepulcher of Woodrow Wilson." Standing before cheering colleagues in a packed Senate chamber, Glass slammed his fist onto his desk in protest until blood dripped from his knuckles, effectively prompting the Democratic caucus to withhold all funding for further hearings.

Although the "Nye Committee" failed to achieve its goal of nationalizing the arms industry, it inspired three congressional neutrality acts in the mid-1930s that signaled profound American opposition to overseas involvement.

For details, see Changes in membership, below.

There were 48 states with two Senators per state, this gave the Senate 96 seats. Membership changed with four deaths, one resignation, and two appointees who were replaced by electees.

Senators are popularly elected statewide every two years, with one-third beginning new six-year terms with each Congress. Preceding the names in the list below are Senate class numbers, which indicate the cycle of their election.