Yaroslav Popovych (Ukrainian: Ярослав Попович, born 4 January 1980) is a retired[2][3] Ukrainian cyclist. Since 2012 till 2016 he rode with the UCI ProTour team Trek–Segafredo.[4] He was born in Drohobych, Ukrainian SSR, Soviet Union. Under-23 road race champion in 2001, Popovych turned professional in 2002 with Landbouwkrediet–Colnago, where he performed particularly strongly in the Giro d'Italia, finishing third in 2003. Upon joining Discovery Channel in 2005, his focus switched to the Tour de France, where he won the young riders' classification in 2005 and won stage 12 in 2006. When Discovery Channel folded at the end of 2007, Popovych moved to Silence–Lotto in 2008 and on to Astana in 2009. Popovych also raced for Team RadioShack in 2010 and 2011.

He was considered one of the most promising cyclists while riding in junior and under-23 races after catching 35 victories in 2000 and 2001.[5] He won the Under-23 Men's road race in the 2001 UCI Road World Championships after finishing second the previous year. He also won the Paris–Roubaix edition for under-23 riders and palio del recioto.[5] The Ukrainian turned pro in 2002 by joining the Belgian team Landbouwkrediet–Colnago and delivered some strong showings, most notably in the Giro d'Italia where he finished third in 2003 and fifth in 2004, when he wore the pink jersey during three stages.

He joined the Discovery Channel in 2005 and he was considered as a possible successor to Lance Armstrong as team leader. In this same year, Popovych took one of his best victory by winning the Volta a Catalunya, which is an important race before the Tour de France. Along with the rest of the Discovery team, he won stage four team time trial in the 2005 Tour and showed his potential by winning the young rider classification of the 2005 Tour de France while helping Lance Armstrong win his seventh Tour de France.

In the 2006 Tour de France, Popovych was considered one of the Discovery Channel team's four leaders, along with José Azevedo, Paolo Savoldelli and George Hincapie.[6] After failing to be among the best for the overall classification in the Pyrenees mountain stages, Popovych won stage 12 by repeatedly attacking his fellow break-away compatriots Alessandro Ballan, Óscar Freire and Christophe Le Mével. During 2006 season he also won stages at the Vuelta a Castilla y León and Tour de Georgia, where he finished third.[7]

Popovych mainly worked as a domestique during 2007 season, aiding Alberto Contador to win Paris–Nice and Tour de France. Early in the season, he won the fifth stage in the 2007 Paris–Nice after attacking 33 kilometers from the finishing line.[8] He was considered as the team leader for 2007 Giro d'Italia, but he withdrew in the twelfth stage after suffering two crashes in the race. In the 2007 Tour de France, he finished eighth while working for Discovery Channel team-mates Alberto Contador and Levi Leipheimer.[9]

In 2008, Popovych moved to Silence–Lotto squad after Discovery Channel announced that it would cease operations at the end of 2007.[9]

Popovych was recruited as a domestique member of the 2008 Silence Lotto Tour De France team primarily to support lead rider Cadel Evans, but had a rather disappointing year, with only a 3rd place in Paris–Nice to show for. At the end of the year, it was announced he would team up with his former Discover manager Johan Bruyneel again in 2009, joining the new Astana Team.

In 2009, Popovych and Lance Armstrong joined the Kazakh-based cycling squad Astana, where many other former Discovery Channel riders and staff are also under contract. Popovych acted as a domestique for Alberto Contador in Paris–Nice, finishing 23rd himself. 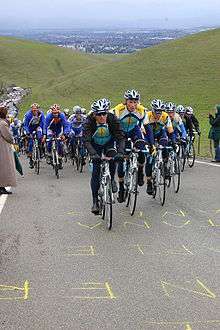 Popovych leads the Astana team in the chase over Patterson Pass during Stage 3 of the 2009 Tour of California.

In 2010 Popovych followed many former Astana riders to the newly created American based squad Team RadioShack.

In January 2011 Popovych was incriminated in the Floyd Landis doping allegations against U.S. Postal Service cycling team, after Sports Illustrated magazine reported that in November 2010 his property in Tuscany had been searched by Federal Officials who discovered drug testing documents, medical supplies and performance-enhancing drugs as well as evidence of links to controversial Italian physician Michele Ferrari.[11] Later that day Popovych denied the allegations.[12] The 2012 USADA Report later tied him directly to going to training camps set up by Ferrari and performing blood transfusions while a part of the Discovery team.[13][14]