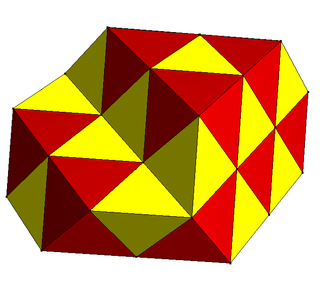 The alternated cubic honeycomb is one of 28 space-filling uniform tessellations in Euclidean 3-space, composed of alternating yellow tetrahedra and red octahedra.

They can be considered the three-dimensional analogue to the uniform tilings of the plane.

The Voronoi diagram of any lattice forms a convex uniform honeycomb in which the cells are zonohedra.

Only 14 of the convex uniform polyhedra appear in these patterns:

The individual honeycombs are listed with names given to them by Norman Johnson. (Some of the terms used below are defined in Uniform 4-polytope#Geometric derivations for 46 nonprismatic Wythoffian uniform 4-polytopes) 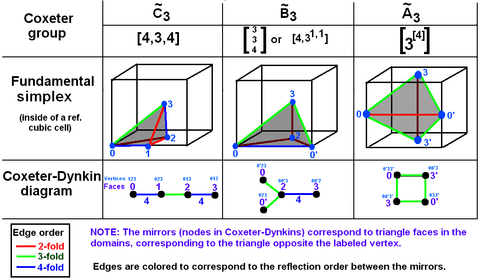 Fundamental domains in a cubic element of three groups. 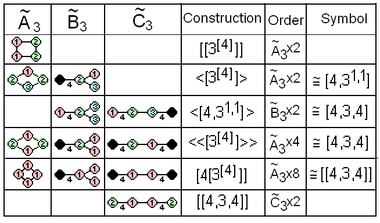 The fundamental infinite Coxeter groups for 3-space are:

There is a correspondence between all three families. Removing one mirror from

, and removing one mirror from

. This allows multiple constructions of the same honeycombs. If cells are colored based on unique positions within each Wythoff construction, these different symmetries can be shown.

In addition there are 5 special honeycombs which don't have pure reflectional symmetry and are constructed from reflectional forms with elongation and gyration operations.

The total unique honeycombs above are 18.

The prismatic stacks from infinite Coxeter groups for 3-space are:

In addition there is one special elongated form of the triangular prismatic honeycomb.

The total unique prismatic honeycombs above (excluding the cubic counted previously) are 10.

Combining these counts, 18 and 10 gives us the total 28 uniform honeycombs.

The regular cubic honeycomb, represented by Schläfli symbol {4,3,4}, offers seven unique derived uniform honeycombs via truncation operations. (One redundant form, the runcinated cubic honeycomb, is included for completeness though identical to the cubic honeycomb.) The reflectional symmetry is the affine Coxeter group [4,3,4]. There are four index 2 subgroups that generate alternations: [1+,4,3,4], [(4,3,4,2+)], [4,3+,4], and [4,3,4]+, with the first two generated repeated forms, and the last two are nonuniform.

, [4,3] group offers 11 derived forms via truncation operations, four being unique uniform honeycombs. There are 3 index 2 subgroups that generate alternations: [1+,4,31,1], [4,(31,1)+], and [4,31,1]+. The first generates repeated honeycomb, and the last two are nonuniform but included for completeness.

The honeycombs from this group are called alternated cubic because the first form can be seen as a cubic honeycomb with alternate vertices removed, reducing cubic cells to tetrahedra and creating octahedron cells in the gaps.

Nodes are indexed left to right as 0,1,0',3 with 0' being below and interchangeable with 0. The alternate cubic names given are based on this ordering.

There are 5 forms[1] constructed from the

, [3[4]] Coxeter group, of which only the quarter cubic honeycomb is unique. There is one index 2 subgroup [3[4]]+ which generates the snub form, which is not uniform, but included for completeness.

Three more uniform honeycombs are generated by breaking one or another of the above honeycombs where its faces form a continuous plane, then rotating alternate layers by 60 or 90 degrees (gyration) and/or inserting a layer of prisms (elongation).

Eleven prismatic tilings are obtained by stacking the eleven uniform plane tilings, shown below, in parallel layers. (One of these honeycombs is the cubic, shown above.) The vertex figure of each is an irregular bipyramid whose faces are isosceles triangles.

There are only 3 unique honeycombs from the square tiling, but all 6 tiling truncations are listed below for completeness, and tiling images are shown by colors corresponding to each form.

All nonprismatic Wythoff constructions by Coxeter groups are given below, along with their alternations. Uniform solutions are indexed with Branko Grünbaum's listing. Green backgrounds are shown on repeated honeycombs, with the relations are expressed in the extended symmetry diagrams.

All 28 of these tessellations are found in crystal arrangements.

The alternated cubic honeycomb is of special importance since its vertices form a cubic close-packing of spheres. The space-filling truss of packed octahedra and tetrahedra was apparently first discovered by Alexander Graham Bell and independently re-discovered by Buckminster Fuller (who called it the octet truss and patented it in the 1940s). . Octet trusses are now among the most common types of truss used in construction.

If cells are allowed to be uniform tilings, more uniform honeycombs can be defined:

A scaliform honeycomb is vertex-transitive, like a uniform honeycomb, with regular polygon faces while cells and higher elements are only required to be orbiforms, equilateral, with their vertices lying on hyperspheres. For 3D honeycombs, this allows a subset of Johnson solids along with the uniform polyhedra. Some scaliforms can be generated by an alternation process, leaving, for example, pyramid and cupola gaps.[2] 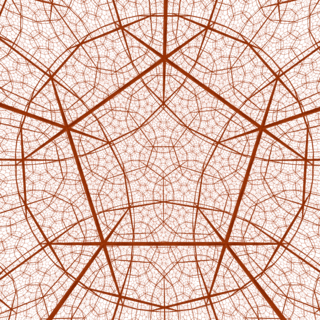 The order-4 dodecahedral honeycomb, {5,3,4} in perspective 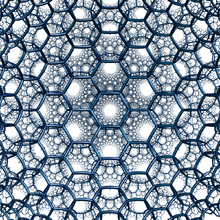 There are 9 Coxeter group families of compact uniform honeycombs in hyperbolic 3-space, generated as Wythoff constructions, and represented by ring permutations of the Coxeter-Dynkin diagrams for each family.

From these 9 families, there are a total of 76 unique honeycombs generated:

The full list of hyperbolic uniform honeycombs has not been proven and an unknown number of non-Wythoffian forms exist. One known example is in the {3,5,3} family.

There are also 23 paracompact Coxeter groups of rank 4. These families can produce uniform honeycombs with unbounded facets or vertex figure, including ideal vertices at infinity:

This article is issued from Wikipedia - version of the 9/24/2015. The text is available under the Creative Commons Attribution/Share Alike but additional terms may apply for the media files.