The cubic honeycomb or cubic cellulation is the only regular space-filling tessellation (or honeycomb) in Euclidean 3-space, made up of cubic cells. It has 4 cubes around every edge, and 8 cubes around each vertex. Its vertex figure is a regular octahedron. It is a self-dual tessellation with Schläfli symbol {4,3,4}. John Horton Conway calls this honeycomb a cubille.

A geometric honeycomb is a space-filling of polyhedral or higher-dimensional cells, so that there are no gaps. It is an example of the more general mathematical tiling or tessellation in any number of dimensions.

The Cartesian coordinates of the vertices are:

for all integral values: i,j,k, with edges parallel to the axes and with an edge length of 1.

It is part of a multidimensional family of hypercube honeycombs, with Schläfli symbols of the form {4,3,...,3,4}, starting with the square tiling, {4,4} in the plane.

It is one of 28 uniform honeycombs using convex uniform polyhedral cells.

There is a large number of uniform colorings, derived from different symmetries. These include:

It is in a sequence of polychora and honeycomb with octahedral vertex figures.

It in a sequence of regular polytopes and honeycombs with cubic cells.

Coxeter group. The symmetry can be multiplied by the symmetry of rings in the Coxeter–Dynkin diagrams:

John Horton Conway calls this honeycomb a cuboctahedrille, and its dual oblate octahedrille. 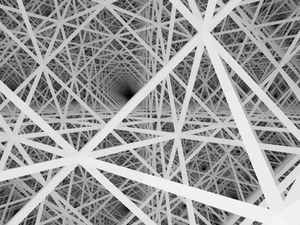 There are four uniform colorings for the cells of this honeycomb with reflective symmetry, listed by their Coxeter group, and Wythoff construction name, and the Coxeter diagram below.

This honeycomb can be divided on trihexagonal tiling planes, using the hexagon centers of the cuboctahedra, creating two triangular cupolae. This scaliform honeycomb is represented by Coxeter diagram 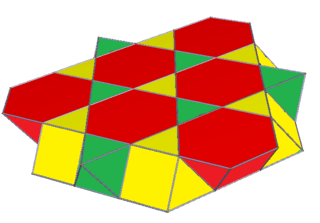 John Horton Conway calls this honeycomb a truncated cubille, and its dual pyramidille. 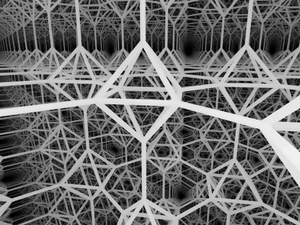 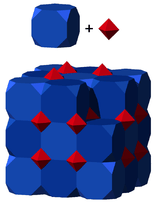 There is a second uniform coloring by reflectional symmetry of the Coxeter groups, the second seen with alternately colored truncated cubic cells.

It can be realized as the Voronoi tessellation of the body-centred cubic lattice. Lord Kelvin conjectured that a variant of the bitruncated cubic honeycomb (with curved faces and edges, but the same combinatorial structure) is the optimal soap bubble foam. However, the Weaire–Phelan structure is a less symmetrical, but more efficient, foam of soap bubbles.

The vertex figure for this honeycomb is a disphenoid tetrahedron, and it is also the Goursat tetrahedron (fundamental domain) for the

The alternated bitruncated cubic honeycomb or bisnub cubic honeycomb can be creating regular icosahedron from the truncated octahedra with irregular tetrahedral cells created in the gaps. There are three constructions from three related Coxeter diagrams:

This honeycomb is represented in the boron atoms of the α-rhombihedral crystal. The centers of the icosahedra are located at the fcc positions of the lattice.[3]

There is a second uniform colorings by reflectional symmetry of the Coxeter groups, the second seen with alternately colored rhombicuboctahedral cells.

John Horton Conway calls this honeycomb a n-tCO-trille, and its dual triangular pyramidille.

Four cells exist around each vertex: 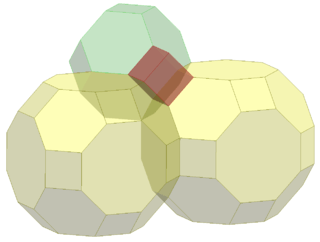 It is related to a skew apeirohedron with vertex configuration 4.4.6.6, with the octagons and some of the squares removed. It can be seen as constructed by augmenting truncated cuboctahedral cells, or by augmenting alternated truncated octahedra and cubes. 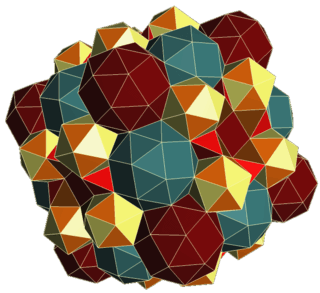 The runcic cantitruncated cubic honeycomb or runcic cubic cellulation contains cells: snub cubes, rhombicuboctahedrons, and cubes. In addition the gaps created at the alternated vertices form an irregular cell.Although it is not uniform, constructionally it can be given as Coxeter diagram

Its name is derived from its Coxeter diagram,

with three ringed nodes representing 3 active mirrors in the Wythoff construction from its relation to the regular cubic honeycomb.

A related uniform skew apeirohedron exists with the same vertex arrangement, but some of the square and all of the octagons removed. It can be seen as truncated tetrahedra and truncated cubes augmented together. 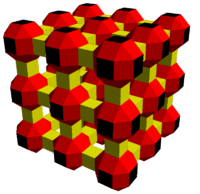 John Horton Conway calls this honeycomb a b-tCO-trille, and its dual eighth pyramidille.

and has symmetry [[4,3,4]]+. It makes snub cubes from the truncated cuboctahedra, square antiprisms from the octagonal prisms and with new tetrahedral cells created in the gaps.

The truncated square prismatic honeycomb or tomo-square prismatic cellulation is a space-filling tessellation (or honeycomb) in Euclidean 3-space. It is composed of octagonal prisms and cubes in a ratio of 1:1. 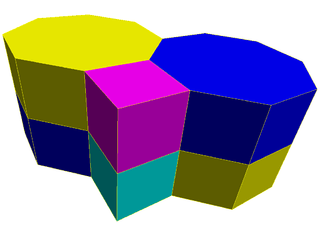 It is constructed from a truncated square tiling extruded into prisms.

It is one of 28 convex uniform honeycombs.

The snub square prismatic honeycomb or simo-square prismatic cellulation is a space-filling tessellation (or honeycomb) in Euclidean 3-space. It is composed of cubes and triangular prisms in a ratio of 1:2. 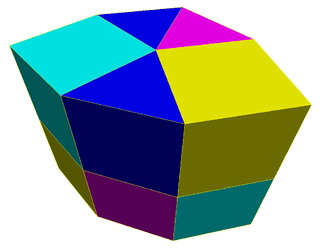 It is constructed from a snub square tiling extruded into prisms.

It is one of 28 convex uniform honeycombs.