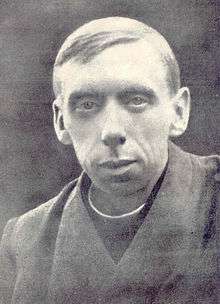 George Tyrrell, S.J. (6 February 1861 – 15 July 1909), was an Irish Jesuit priest (until his expulsion from the Society) and a modernist theologian and scholar. His attempts to evolve and adapt Catholic theology in the context of modern ideas made him a key figure in the modernist controversy within the Roman Catholic Church in the late 19th century.

Tyrrell was born on 6 February 1861 in Dublin, Ireland, and was brought up as an Anglican. His father was a journalist who died shortly before Tyrrell was born. Tyrrell grew up poor. He converted and was received into the Catholic Church in 1879. He immediately applied to join the Society of Jesus, but was advised by the provincial superior to wait a year. He spent the interim teaching at Jesuit schools in Cyprus and Malta.[1] Joining the Jesuits in 1880, Tyrrell was ordained to the priesthood in 1891. After a brief period of pastoral work, he taught philosophy at Stonyhurst, where he came into conflict with some of the faculty for not adhering to the traditional Jesuit approach to Thomas Aquinas, which was heavily influenced by the work of Francisco Suárez.[1]

In 1896 he was transferred to the Jesuit House on Farm Street in London.[2] It was while at Farm Street that Tyrrell discovered the work of Maurice Blondel. In 1899 he published A Perverted Devotion in which he argued that the rationalist approach of the Scholastics was not applicable to matters of faith. Tyrrell found himself assigned to a small mission in Yorkshire.

Asked to repudiate his theories in 1906, Tyrrell declined and was dismissed from the Society of Jesus by superior general Franz X. Wernz. 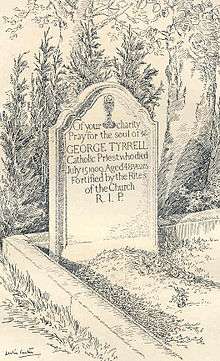 The stone erected at the grave of George Tyrrell

Tyrrell argued that most biblical scholarship and devotional reflection, such as the quest for the historic Jesus, involves elements of self-conscious self-reflection. His famous image, criticising Adolf von Harnack's Liberal Protestant view of Scripture, is of peering into a well, in which we see our own face reflected in the dark water deep below:

"The Christ that Harnack sees, looking back through nineteen centuries of "Catholic darkness", is only the reflection of a Liberal Protestant face, seen at the bottom of a deep well."[3]

He argued that the pope must not be an absolute autocrat but a "spokesman for the mind of the Holy Spirit in the Church", the "Base Community" as he termed it, of the laity.

Tyrrell was disciplined under Pope Pius X for advocating "the right of each age to adjust the historico-philosophical expression of Christianity to contemporary certainties, and thus to put an end to this utterly needless conflict between faith and science which is a mere theological bogey."

He was suspended from the sacraments the following year and finally excommunicated in 1908. He died the following year, still considering himself to be a devout Catholic. Tyrrell was the only Jesuit to be expelled by a Jesuit general in the 20th century until the Spanish father general, Pedro Arrupe, expelled Huub Oosterhuis in 1969. Modernism played a major role in both cases.

With the condemnation of modernism, first in the 65 propositions of the decree Lamentabili sane exitu in July 1907 and then in the encyclical Pascendi dominici gregis in September 1907, Tyrrell's fate was sealed. He was deprived of the sacraments – described by Peter Amigo, Bishop of Southwark, as "a minor excommunication" – for his robust criticisms of Pascendi which appeared in The Times on 30 September and 1 October 1907.[4] In his rebuttal of Pius X's encyclical, Tyrrell alleged that the Church's thinking was based on a theory of science and on a psychology that seemed as strange as astrology to the modern mind. Tyrrell accused Pascendi of equating Catholic doctrine with Scholastic theology and of having a completely naïve view of the idea of doctrinal development. He furthermore asserted that the encyclical tried to show the "modernist" that he was not a Catholic, but all it succeeded in doing was showing that he was not a Scholastic.[1]

He was given extreme unction on his deathbed in 1909, but as he refused to abjure his modernist views was denied burial in a Catholic cemetery.[5] A priest, his friend Henri Brémond, who was present at the burial made a sign of the cross over Tyrrell's grave, for which Bremond was temporarily suspended a divinis by Bishop Amigo for some time.[6]

A near contemporary account places most of the blame for the disagreement between the modern Catholic philosophers and the Vatican on the then Papal Secretary of State, Cardinal Merry de Val's "irreconciliable and reactionary attitude".[7]

According to Michael Hurley, S.J., Tyrrell's views were in large part vindicated by the Second Vatican Council.[2]