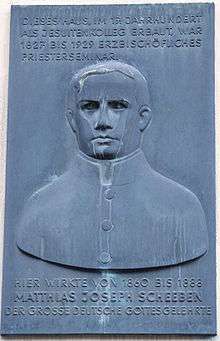 Scheeben studied at the Gregorian University at Rome under Carlo Passaglia and Giovanni Perrone from 1852 to 1859 and lived in Collegium Germanicum. He was ordained to the priesthood on 18 December 1858. He taught dogmatic theology at the diocesan seminary of Cologne from 1860 to 1875.[1]

In Scheeben's own words, the practical aim of his theology was "to make the Christian feel happy about his faith. Because the beauty and eminence of our faith consist in this: that through the mysteries of grace it raises our nature to an immeasurably high plane and presents to us an inexpressibly intimate union with God."[2]

Scheeben's mind reveled in speculating on Divine grace, the hypostatic union, the beatific vision, the all-pervading presence of God; he was a firm believer in visions granted to himself and others, and his piety was all-absorbing. Very few minds were attuned to his. His pupils were allegedly overawed by the steady flow of his long abstruse sentences which brought scanty light to their intellects; his colleagues and his friends but rarely disturbed the peace of the workroom where his spirit brooded over a chaos of literary matters.[1]

The list of Scheeben's works opens with three treatises dealing with grace:

The author did not finish this last; he died whilst working on "Grace". The missing treatises were supplied in German by Dr. Leonhard Atzberger (Freiburg, 1898). In English the missing treatises were supplied by Wilhelm and Scannel, who whilst strictly adhering to Scheeben's thought, reduced the bulky work to two handy volumes entitled: A Manual of Catholic Theology based on Scheeben's Dogmatik (3rd ed., 1906).