Jean Vanier, CC GOQ (born September 10, 1928) is a Canadian Catholic philosopher, theologian and humanitarian. He founded L'Arche in 1964, an international federation of communities spread over 35 countries, for people with developmental disabilities and those who assist them.[1] Subsequently in 1971, he co-founded Faith and Light, with Marie-Hélène Mathieu, which also works for people with developmental disabilities, their family and friends in over 80 countries. He continues to live as a member of the original L'Arche community in Trosly-Breuil, France.

Over the years, he has authored 30 books on religion, disability, normality, success and tolerance.[2] Among the honors he has received are the Companion of the Order of Canada (1986),[3] Grand Officer of the National Order of Quebec, French Legion of Honour (2003), Community of Christ International Peace Award (2003), the Pacem in Terris Peace and Freedom Award (2013) and the Templeton Prize (2015).

Vanier is the son of Major-General Georges Vanier, who became the 19th Governor General of Canada (1959-1967), and his wife Pauline Vanier. He was born in Geneva, while his father was on diplomatic service in Switzerland. Fourth of five siblings, in his youth, Vanier received a broad education in English and French first in Canada, and then England and France. He joined the Royal Navy at the Dartmouth Naval College (later renamed Britannia Royal Naval College) in England at age 13. During World War II, Vanier and his family fled Paris just before the Nazi occupation. He spent much of the War at an English naval academy, preparing for a career as a naval officer.[4][5][6]

In early 1945, Vanier was visiting Paris where his father was Canadian Ambassador; he and his mother went to assist survivors of Nazi concentration camps. Seeing the emaciated victims, their faces twisted with fear and anguish, was a profoundly moving encounter for him, which he never forgot. Shortly thereafter, at age seventeen, with World War II still raging, he served with the Royal Navy and then with the Royal Canadian Navy. In 1947 as a midshipman, Vanier accompanied the Royal Family on their tour of South Africa aboard HMS Vanguard.

In 1949, he joined the Royal Canadian Navy, at the carrier HMCS Magnificent. However, in 1950, feeling a strong inner spiritual calling to do “something else,” he resigned his naval commission. Vanier travelled to Paris to study as an undergraduate. He eventually went on to complete a PhD in philosophy from the Institut Catholique de Paris, with a doctoral thesis on Aristotle, which was published in 1966 as Happiness as Principle and End of Aristotelian Ethics, also his first published work. He subsequently went to write several books during his career and taught philosophy at the University of St. Michael's College, University of Toronto.[6] Vanier left academia in 1964 seeking more spiritual work.

In 1964, through Vanier's friendship with a priest named Father Thomas Philippe, he became aware of the plight of thousands of people institutionalised with developmental disabilities. Vanier invited two men, Raphael Simi and Philippe Seux, to leave the institutions where they resided and live with him in Trosly-Breuil, France. Their time together led to the establishment of L'Arche at Trosly-Breuil, a community for people with disabilities to live with those who cared for them. Since that time L'Arche communities have been established in countries around the world. A governing philosophy of the communities is Vanier's belief that people with disabilities are teachers, rather than burdens bestowed upon families.[7]

Until the late 1990s, Jean Vanier carried the responsibility for L'Arche in Trosly-Breuil in France, and for the International Federation of L'Arche. He stepped down to spend more time counseling, encouraging and accompanying the people who come to live in L'Arche as assistants to those with disabilities. Vanier has established 147 L'Arche communities in 35 countries around the world which have become places of pilgrimage for those involved.[8] 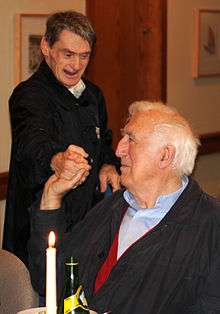 Jean Vanier with John Smeltzer, a member of L'Arche Daybreak, 2009

In 1968, Jean Vanier gave a Faith and Sharing retreat in Marylake, Ontario the first of a movement of retreats where people from many walks of life are welcome.[9] The retreats continue today as part of the Faith and Sharing Federation.[10] As of 2013, there are 13 communities in North America that organize annual retreats and days of prayer.[11] Faith and Sharing member Bill Clark, SJ explains: "There is then a two-fold movement in Faith and Sharing: an inward movement towards God hidden in the depths of our own vulnerability, and an outward movement towards our brothers and sisters, especially those who are more poor and in need." [9] The organization's records are housed at the John M. Kelly Library, University of St. Michael's College.[12]

In 1971, he co-founded Faith and Light with Marie-Hélène Mathieu,. It is an international movement of forums for people with developmental disabilities, their family and friends. Today there are over 1,800 Faith and Light communities in 80 countries around the world.[6]

Vanier still makes his home in the original L'Arche community of Trosly-Breuil, France. He travels widely, visiting other L'Arche communities, encouraging projects for new communities, and giving lectures and retreats.. He was the 1998 Massey lecturer focusing on the theme of "Becoming Human".[13] During one of his lectures he touched on his distaste for barriers around people with intellectual disabilities, a motivating philosophy behind L'Arche: "We must do what we can do diminish walls, to meet each other. Why do we put people with disabilities behind walls?"[7]

He has received numerous awards for his work, including the Companion of the Order of Canada, the Legion of Honour (France, 2003)[14] and many awards from faith groups, among them the Paul VI International Prize, the Community of Christ International Peace Award, the Rabbi Gunther Plaut Humanitarian Award, and the Gaudium et Spes Award, named after the Second Vatican Council's Gaudium et spes document.[15]

In 2013 he received the United States-based Pacem in Terris Peace and Freedom Award, established by a coalition of Catholic dioceses in the Midwest.[17]

In March 2015 Vanier was awarded the Templeton Prize in recognition of his advocacy for people with disabilities and his contributions to a broader exploration of helping the weak and vulnerable.[18][19] 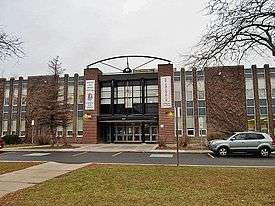 On September 27, 2016, Jean Vanier received The Peace Abbey Foundation (USA) Int'l Courage of Conscience Award in Trosly-Breuil, France for his lifelong commitment to building a world of inclusion for individuals with disabilities.