For those of a similar name, see Michael Heller (disambiguation). 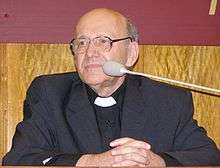 Michał Kazimierz Heller (born 12 March 1936 in Tarnów) is a professor of philosophy at the Pontifical University of John Paul II in Kraków, Poland, and an adjunct member of the Vatican Observatory staff. He also serves as a lecturer in the philosophy of science and logic at the Theological Institute in Tarnów. A Roman Catholic priest belonging to the diocese of Tarnów, Dr. Heller was ordained in 1959.

Michał Heller attended high school in Mościce, graduated from the Catholic University of Lublin, where he earned a master's degree in philosophy in 1965 and a Ph.D. in cosmology in 1966.

In March 2008, Heller was awarded the $1.6 million (£820,000) Templeton Prize for his extensive philosophical and scientific probing of "big questions." His works have sought to reconcile the "known scientific world with the unknowable dimensions of God."[1]

Heller plans to use the prize money to establish a research institute named after Nicholas Copernicus aimed at reconciling science and theology. On receiving the Templeton Prize, Heller said:

When asking this question, we are not asking about a cause like all other causes. We are asking about the root of all possible causes.

Science is but a collective effort of the human mind to read the mind of God from question marks out of which we and the world around us seem to be made.[2]