For the saint, see Saint Cajetan.

Thomas Cajetan (pronunciation: /ˈkædʒətən/), also known as Gaetanus, commonly Tommaso de Vio or Thomas de Vio (20 February 1469 - 9 August 1534), was an Italian philosopher, theologian, cardinal (from 1517 until his death) and the Master of the Order of Preachers 1508-18. He was a leading theologian of his day who is now best known as the spokesman for Catholic opposition to the teachings of Martin Luther and the Protestant Reformation while he was the Pope's Legate in Wittenberg, and perhaps also among Catholics for his extensive commentary on the Summa Theologica of Thomas Aquinas.[1]

He is not to be confused with his contemporary, Saint Cajetan, the founder of the Theatines.

De Vio was born in Gaeta, then part of the Kingdom of Naples, as Jacopo Vio. The name Tommaso was taken as a monastic name, while the surname Cajetan derives from his native city. At the age of fifteen he entered the Dominican order, and devoted himself to his study of philosophy of St. Thomas Aquinas when he became, before the age of thirty, a doctor of theology at Padua, where he was subsequently professor of metaphysics.

A public disputation at Ferrara (1494) with Pico della Mirandola gave him a great reputation as a theologian. He was made general procurator in 1507 and general of his order a year later in 1508. For his zeal in defending the papal rights against the 1511 Council of Pisa, in a series of works which were condemned by the Sorbonne and publicly burnt by order of King Louis XII, he obtained the bishopric of Gaeta, and in 1517 Pope Leo X made him a cardinal and archbishop of Palermo.

He appears in 1511 as a supporter of the pope against the claims of the Council of Pisa (1511-1512), called by dissident cardinals to punish Pope Julius II, who had ignored the electoral capitulations he had accepted before being elected. Cajetan composed in defense of his position the Tractatus de Comparatione auctoritatis Papæ et conciliorum ad invicem. Jacques Almain answered this work, and Cajetan replied in his Apologia. Cajetan refused to accept Almain's argument that the Church's polity had to be similar to a lay regime, complete with limits on the ruler.[2] At the Fifth Lateran Council (1512–17) which Pope Julius II set up in opposition to that of Pisa, De Vio played the leading role. During the second session of the council, he brought about a decree recognizing the superiority of papal authority to that of councils.

For his services Leo X made him in 1517 cardinal presbyter of San Sisto in Rome, and made him in the following year bishop of Palermo. He resigned as bishop of Palermo in 1519 to become bishop of Gaeta, as granted him by the Emperor Charles V, for whose election De Vio had labored zealously. 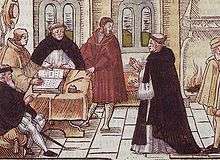 The meeting of Cajetan (left) and Martin Luther (right).

In 1518 he was sent as legate to the Diet of Augsburg and to him, at the wish of the Saxon elector, was entrusted the task of examining and testing the teachings of Luther. According to Catholic polemicist Hilaire Belloc, "[Luther] had not been treated roughly by his opponents, the roughness had been on his side. But things had gone against him, and he had been made to look foolish; he had been cross-examined into denying, for instance, the authority of a General Council--which authority was the trump card to play against the Papacy."[3]

In 1519, De Vio helped in drawing up the bill of excommunication against Luther.

De Vio was employed in several other negotiations and transactions, being as able in business as in letters. In conjunction with Cardinal Giulio de' Medici in the conclave of 1521‑1522, he secured the election of Adrian Boeyens, bishop of Tortosa, as Adrian VI. He retained influence under Clement VII, suffered a short term of imprisonment after the storming of Rome by the Constable of Bourbon and by Frundsberg (1527), retired to his bishopric for a few years, and, returning to Rome in 1530, assumed his old position of influence about the person of Clement, in whose behalf he wrote the decision rejecting the appeal for divorce from Catharine of Aragon made by Henry VIII of England. Nominated by Clement VII a member of the committee of cardinals appointed to report on the "Nuremberg Recess", he recommended, in opposition to the majority, certain concessions to the Lutherans, notably the marriage of the clergy as in the Greek Church, and communion in both kinds according to the decision of the council of Basel. 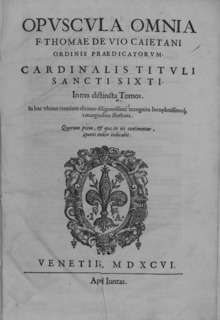 As a philosopher and logician, Cajetan defended the idea of analogy.[4]

Though as a theologian De Vio was a scholastic of the older Thomist type, his general position was that of the moderate reformers of the school to which Reginald Pole, later archbishop of Canterbury, also belonged; i.e., he desired to retain the best elements of the humanist revival in harmony with Catholic orthodoxy illumined by a revived appreciation of the Augustinian doctrine of justification. In the field of Thomistic philosophy he showed striking independence of judgment, expressing liberal views on marriage and divorce, denying the existence of a material Hell and advocating the celebration of public prayers in the vernacular.

Some Dominicans regarded his views as too independent of those of Saint Thomas. The Sorbonne in Paris found some of these views heterodox, and in the 1570 edition of his celebrated commentary on Aquinas' Summa, the objectionable passages were expunged. In this spirit he wrote commentaries upon portions of Aristotle, and upon the Summa of Aquinas, and towards the end of his life, made a careful translation of the Old and New Testaments, excepting Solomon's Song, the Prophets and the Revelation of St John. Cajetan also wrote opinions on subjects of practical importance, such as the disposition of plundered goods the ownership of which could not be determined.[5]

Of the Reformation he remained a steadfast opponent, composing several works directed against Martin Luther,[6] and taking an important share in shaping the policy of the papal delegates in Germany. Learned though he was in the scholastics, he recognized that to fight the Reformers with some chance of success a deeper knowledge of the Scriptures than he possessed was necessary. To this study he devoted himself with characteristic zeal, wrote commentaries on the greater part of the Old and the New Testament, and, in the exposition of his text, which he treated critically, allowed himself considerable latitude in departing from the literal and traditional interpretation.

De Vio is reported as declaring

Now what a ruler can do in virtue of his office, so that justice may be served in the manner of riches, is to take from someone who is unwilling to dispense from what is superfluous for life or state, and to distribute it to the poor... as Basil said, it belongs to the indigent"

a statement that has seemed controversial to some.[7]

In contrast to the majority of Italian cardinals of his day, De Vio was a man of austere piety and fervent zeal. From the standpoint of the Dominican idea of the supreme necessity of maintaining ecclesiastical discipline, he defended the rights of the papacy and proclaimed that the pope should be "the mirror of God on earth."

In the mid-twentieth century, Cajetan's thought came to be assessed negatively by certain Catholic commentators who, in reacting against the then-regnant neo-Thomist thought, portrayed Cajetan as the first person to make mistaken interpretations of the thought of Thomas Aquinas - interpretations which, in their (different) narratives, lingered into the twentieth century.