Not to be confused with Kalhatti Falls, Ooty. 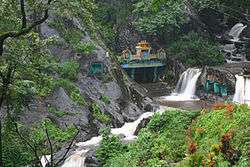 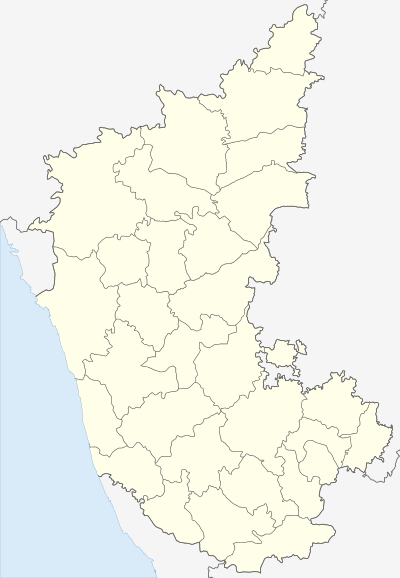 Kalhatti Falls (ಕನ್ನಡ : ಕಲ್ಹತ್ತಿ ಜಲಪಾತ) or Kalahasti Falls is located at Kallattipura (kallathigiri) in Chikmagalur district of Karnataka, India. The waterfall is 10 kilometers (6.2 mi) away from Kemmangundi hill station. It offers an excellent view of the cascading water from the Chandra Drona Hill from 122 meters (400 ft) above in front of the Veerabhadreshwara Temple dedicated to Lord Shiva.

Legends say that sage Agastya had prayed for a long time in this place.The Veerabhadra temple is supposed to be built in the Vijayanagar times. The temple is with three stone carvings of three elephants at the entrance. Water cascade water over these elephants and devotees believes that these waters have the power to cure diseases.

An annual fair of Lord Veerabhadra is held here for three days during March/April which attracts pilgrims from many parts of the state.

It is also a hot spot among the trekkers who carry out their trekking exercises on the adjoining hills and mountains. Trekkers climbing along the mountainous terrains enjoy the picturesque view. With base in Tarikere which is 35 km from Kemmangundi, trekkers climb the hill slopes to enjoy the panoramic view of the verdant valleys below.

Kalhatti Falls is located one hour from Birur (Birur - Kadur Taluk in Chikmagalur District). Birur is near Kadur, between Arsikere in Hassan Dist and Bhadravathi in Shimoga Dist. From Birur, Kalhatti is accessible through Lingadahalli.

The route from Bangalore is through Tumkur - Tiptur - Arsikere - Kadur - Birur on NH206. The road from Birur to Lingadahalli is about 15 km from there, there is a fork whose left arm goes to Santaveri and continues towards Chikmagalur and the right arm goes towards Kalhatti falls and Kemmangundi.

How to get there: Birur is a junction well connected on the Bangalore-Shimoga, Bangalore-Kolhapur, Bangalore-Hubli or Yeshwantpur-Vasco routes. The Shimoga Express leaves Bangalore at 2310 and reaches Birur at an unearthly hour of 0315. Buses from Birur towards Lingadahalli are at 0545, 0630 and quite regularly after that. These buses take about 30 mins. You can hire private vehicles to take you till Kalhattigiri (another 30 min. ride on road)from where you can begin the trek.

There are plenty of cardamom trees which can be found all in the same general area as Kalhatti Falls. It is also possible to experience some of India's exotic wildlife in the area of the falls. Bear, tigers, elephants, and monkeys can all be seen in that region.