Shivanasamudra is a small city in the Mandya District of the state of Karnataka, India. It is situated on the banks of the river Kaveri, which forms here the boundary to the Chamarajanagar District, and is the location of one of the first Hydro-electric Power stations in Asia, which was set up in the year 1902.[1] 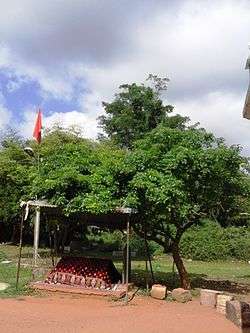 Dargah at Sathyagala on Shivasamudram Road

The Sivanasamudra Falls is on the Kaveri River after the river has wound its way through the rocks and ravines of the Deccan Plateau and drops off to form waterfalls.[2] The island town of Shivanasamudra divides the river into twin waterfalls. This creates the fourth largest island in the rivers course. A group of ancient temples are located here and there likely was a village.

This is a segmented waterfall. Segmented waterfalls occur where the water flow is broken into two or more channels before dropping over a cliff, resulting in multiple side by side waterfalls. It has an average width of 305 meters, a height of 98 m, and an average volume of 934 cubic meters / sec. The maximum recorded volume is 18,887 cubic meters / sec. It is a perennial waterfall. The time of best flow are the monsoon season of July to October.[3]

Sri Ranganathaswamy Temple located here is built in the Dravidan style of architecture. Sri Ranganathaswamy here is also referred to as "Madya Ranga", who is highly revered by Sri Vyshanava devotees among others. Among all the three Rangs, the deity here is believed to represent the youth form of the God and hence is also fondly referred to as 'Mohana Ranga' and 'Jaganmohana Ranga'. Madhyranga is an ancient temple housing a beautiful idol, yet being located remotely sees few visitors. The temple often remains closed to visitors as the priest is not punctual, and sadly Karnataka government temple authority has done little to maintain and promote this place.[4] There are three more temples in three other sides of the island.

The ancient Sri Someshwara Temple is another famous temple here at Shivanasamudra. Adi guru Sri Shankaracharya is said to visited this place and has established a "Sri Chakra" in this place. Surprisingly, it is believed that the Someshwara Linga here is said to have been existing much before the Ranganantha Idol and that the Saptarshis were performing pooja and worshipping this Linga.

Asia's First hydro-electric power station is located at the waterfall and is still functional. This station was commissioned by the Diwan of Mysore, Sir K. Seshadri Iyer. The power generated here was initially used in Kolar Gold Fields.