The Malaprabha River (Kannada ಮಲಪ್ರಭಾ ನದಿ) is a tributary of the Krishna River and flows through the state of Karnataka in India.[1] It rises in the Western Ghats at an altitude of 792.4 m (2,600 ft) in the state's Belgaum district. The river joins Krishna River at Kudalasangama in Bagalkot district.

Malaprabha River originates in the Sahyadri mountains at an altitude of 792.4 metres (2,600 ft) at Kanakumbi village 16 km (9.9 mi) west of Jamboti village, Khanapur taluka, Belgaum District, Karnataka. At the origin of the Malaprabha is an ancient temple dedicated to Shree Mauli Devi. The temple is in R.S. No. 127 of Kankumbi.[2] Malaprabha birthplace is a pilgrimage center with mythological origins. A symbol in rock carved by hand near the source of the river Malaprabha depicts the origin of the river for the purpose of safety showered for the well being of humankind. It is a source of highly stable mineral water. Presence of discontinuities has major effects on properties of contours at source of river. Permeability is dependent on orientation of the region.

Malaprabha flows a distance of 304 km (189 mi) from Kanakumbi-Khanapur-Soundatti (Malaprabha Dam)-Nargund-Pattadkal-Kudalasangam before joining river Krishna at an altitude of 488 metres (1,601 ft) at Kudala Sangama in Bagalkot district.

It revealed from the RTC maintained by the Tahasildar, Khanapur Revenue Dept, Government of Karnataka, India that Yuvaraj Kurtkoti has legal ownership and lawful possession of R.S. No. 127 of Kankumbi, Jamboti Circle, Khanapur Taluka, Belgaum Dist. Karnataka State, India.[2] 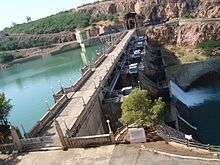 Navilatirtha Dam (Navil in Kannada means peacock) is between Saundatti and Munavalli in Belgaum District. The reservoir created by the dam is called Renukasagara, its catchment area is 11,549 km3 (2,771 cu mi). This reservoir irrigates more than 2,000 km2 (770 sq mi) of agricultural land.

There is an ancient temple of the deity Yellamma on a nearby hill. This is a pilgrimage centre for thousands of devotees. Also the temples of Aihole, Pattadakal and Badami are on the banks of the Malaprabha. These are listed as World Heritage sites by UNESCO.