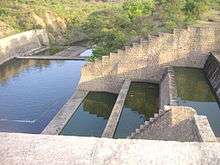 The Arkavati (Kannada: ಅರ್ಕವತಿ) is an important mountain river in Karnataka, India, originating at Nandi Hills of Chikkaballapura district.[1] It is a tributary of the Kaveri, which it joins at 34 km south of Kanakapura, called Sangama in Kannada, after flowing through ramanagara and Kanakapura. The river drains into the Chikkarayappanahalli Lake near Kanivenarayanapura. Kumudavathi and Vrishabhavathi rivers are tributaries to this river. It forms Chunchi falls near Haroshivanahalli.

The river is used by the Bangalore Water Supply and Sewerage Board to provide 135 million litres of drinking water per day to the city of Bengaluru, or about 20% of all the city's water. As it is filtered in the nearby mountain aquifer, the water is fresh and crystal clear.[2] The water is taken from two reservoirs built on the river, the Hesaraghatta (or Hesseraggatta), which was built in 1894, and the Tippagondanahalli Reservoir (or T G Halli), which was built in 1933.[2] There is Manchanabele dam that is across the river further downstream.