Hesaraghatta Lake is a manmade reservoir located 18 km to the north-west of Bengaluru in Karnataka state, India. It is a fresh water lake created in the year 1894 across the Arkavathy River to meet the drinking water needs of the city. Sir K. Seshadri Iyer, the then Dewan of erstwhile Mysore state and the then Chief Engineer of Mysuru, M. C. Hutchins, planned to build the scheme called the “Chamarajendra Water Works” to store a three-years' water supply to the city.[1][2]

The lake is approachable by road from Bangalore at a distance of 26.5 km to the north-west of the City.[3]

The total catchment area draining into the Lake at the dam built on the Arkavathy River is 73.84 km2 (2189 mi2), out of which the direct draining catchment is 2.68 km2 (6.86 sq mi2).There are 184 tanks built in the Arkavathy River basin upstream of the Hesaraghatta lake. The Arkavati River originates in the Nandi Hills of Chikkaballapur district and joins the Kaveri River at Kanakapura after flowing through Kolar District and Bangalore Rural district...[4][5] The Vrishabhavati and the Suvarnamukhi are the tributaries which drain part of Bangalore and Anekal Taluk respectively into the Arkavati River. The catchment receives a mean annual rainfall of 859.6 mm.[6] 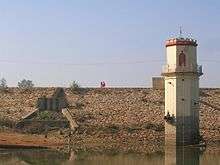 The Arkavathy River is one of the two rivers which partially meet the water supply needs of Bangalore; the other being the Kaveri. The reservoirs created by building dams on the Arkavathy are the "Hesaraghatta" and the “Chamarajasagara” at Thippagondanahalli (TG halli) built during the years 1894 and 1933 respectively. The Hesaraghatta dam is an earthen bund of 1,690 m (5,540 ft) with a total height of 40.55 m (133.0 ft) creating the Hesaraghatta Lake (reservoir) with storage of 997 M.Cft at full reservoir level with a lake surface area of 450 hectares (1,100 acres). Water from the reservoir is taken through initially a 1.4 m dia (42" dia) Hume pipe to the Soladevanahalli Pumping Station by gravity and then pumped (using steam pumps initially and later changed to electric pumps at Soledevanahalli) against a head of 115 to 135 m to the Combined Jewel Filters (CJF) plant at Malleswaram for treatment and supply to the consumers in the city.[3][7]

When the Hesaraghatta Lake started drying up in the year 1925, as an urgent remedial measure, another dam was built to create a reservoir called the Chamaraja Sagar at TG Halli, downstream of the Hesaraghatta Lake. This dam has been enlarged from time to time, over the years, to meet partially, the increasing water supply demand of Bangalore.[8]

Deterioration of the lake

The reservoir is reported to have filled up last in the year 1994 and thereafter the lake’s deterioration and drying up started, reducing its reliability as a water supply source.[9]

The reasons attributed to the lake’s drying up are erosion in the catchment and consequent capacity shrinking due to continuous silting. As of July 2009, the lake is completely dry. .[10]

In recent years, the Hesaraghatta Lake bed has seen an increased number of bird photographers who drive on the lake bed using their cars and SUVs as hides resulting in extensive damage to the grassland habitat. This has increased the vehicle tracks to 43 km in total, with the average track width coming to 1.62 meters. About 136 hectares of habitat was either lost or disturbed because of vehicular movement.[11][12][13][14][15][16] 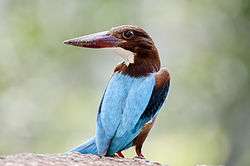 Kingfisher in the Lake area

Even in the deteriorated condition of the lake, birds such as the kingfisher (Halcyon smyrnensis), magpie robin (Copsychus saularis), little egrets, common mynas (Acridotheres tristis), brahminy kites, black drongos, bulbuls, greater coucals, purple sunbirds, etc., (some are pictured in the gallery) have been reported in and around the lake periphery. Documented records of sighting of 2000 water birds of 29 species have been reported. The lake is also a great place for the winter migrants. Harriers and spotted eagles have been reported on this lake during winter. Bird poaching traps, a common sight, are located and removed from the bed of the lake quite often.[17][18]

Apart from the water supply, the lake, which was known for its birds and river rafting (wind surfing), has drawn the attention of public spirited organizations and individuals for undertaking restoration works to revive it.[10] 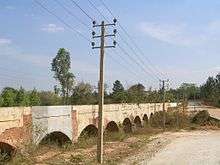 The Walk has also brought out facts such as, a) presence of the reservoir and old pumps, b) the building of 1896 A.D. vintage which has maps displayed in a building depicting how the water was received and pumped, c) the water level chart of the Hessarghatta reservoir till 2000 A.D, d)a rain gauge to measure the rainfall, e) the remnants of the brick aqueduct to convey water by gravity at Turbanahalli and f) the Siphon at the Hesaraghatta Lake used to discharge the flood waters when the reservoir was full. The final verdict of the Water Walkers is that:[19]

The Hessarghatta reservoir has the capacity to supplement Bangalore water requirements at a far cheaper cost than any other. It makes ecological and economic sense to look at its revival.

The fertile area which encircles the Lake has a number of important institutions such as the Government Aquarium,Government Film and Television Institute, Horticultural Research Institute, Indo-Danish Poultry and Dairy farms with its livestock breeding and poultry centers which face the Lake, and the famous Nrityagram, the dance village — India's first modern Gurukul (residential school) founded by Odissi dancer, the late Protima Gauri in 1990.[18]