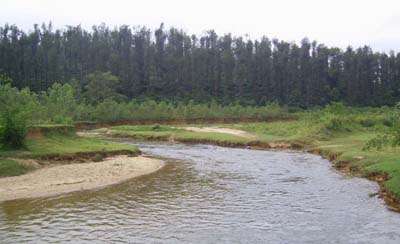 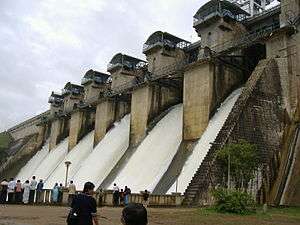 The Hemavati (Kannada ಹೇಮಾವತಿ ) is a river in Karnataka, India,[1] an important tributary of the Kaveri.

The Hemavati River starts in the Western Ghats at an elevation of about 1,219 metres[2] near Ballala rayana durga in the Chikmagalur District of the state of Karnataka, in southern India. It flows through Hassan District where it is joined by its chief tributary, the Yagachi River, and then into Mysore district before joining the Kaveri near Krishnarajasagara. It is approximately 245 km long and has a drainage area of about 5,410 km².[3]

A dam across the Hemavati was completed in 1979, above Gorur in Hassan district, and downstream from the Yagachi confluence. The dam is 58 meters in height, and 4692 meters long, impounding a reservoir of 8502 hectares [4]

The Shettihalli Rosary Church, which was submerged during the construction of the dam can be seen only when the dam height is low during the summer months. The church was constructed by French Missionaries in the 1860s, and has a mighty and magnificent structure in the Gothic Architecture. In 1960, when the government decided to build the dam, the church was abandoned. When the water level is low, sometimes coracles are used to go inside the church. [5][6]