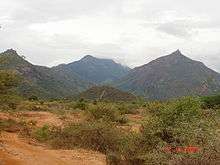 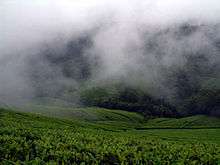 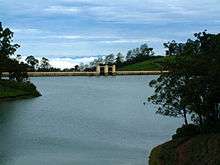 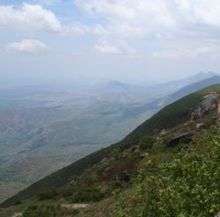 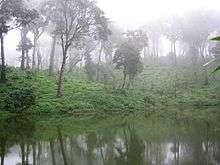 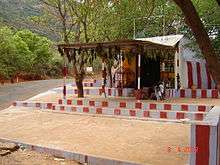 Murugan Temple on the foot hill 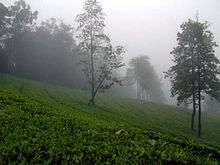 The High Wavies of Theni district

Meghamalai,(மேகமலை, മേഘമല) popularly called High Wavy Mountains, is a cool and misty mountain range situated in the Western Ghats in Theni district, Tamil Nadu, near Kumily, Idukki District, Kerala. It is a place of natural beauty dotted with cardamom plantations and tea estates. The place is situated at an elevation of 1,500 m above sea level and it is rich in flora and fauna. This area, now mostly planted with tea, includes Cloudlands, Highwavys and Manalaar estates, the access to which is now largely restricted. It still includes large untouched remnants of evergreen forest.[1]

There is a long-pending proposal with the Tamil Nadu Forest Department to establish the Megamalai Wildlife Sanctuary on 600 km2 of forest in the division. Priority tasks in the sanctuary should be the control of poaching and the use of pesticides, the elimination of ganja (Cannabis sativa) and the cultivation and scientific management of watersheds. The Megamalai Wildlife Sanctuary can be an excellent buffer to the Periyar Tiger Reserve and Grizzled Squirrel Wildlife Sanctuary and can immensely strengthen conservation in the southern Western Ghats, the range of hills south of the Palakkad Gap.[2]

Vegetation ranges from scrub forests at the foothills, up to ubiquitous expanses of tea and coffee estates, to spice (pepper, cardamom, cinnamon) plantations and finally to the dense evergreen forests at the top.

The sanctuary is also home to the endangered, arboreal grizzled giant squirrel Ratufa macrora. The home range of an individual is between 1,970 and 6,110 m2. This greyish brown squirrel weighs 1 to 1.8 kg and is the size of a small cat. It measures about 735 mm from nose to tail with the tail being 360 – 400 mm long. They construct nets at forked branches where the crowns of neighbouring trees meet. This enables the squirrel to move away from the site by jumping from tree to tree when threatened. It makes two nets. One it uses as a nursery and the other for resting. This confuses predators like birds and snakes.

One of the rarest fruit bats of the world, Salim Ali's fruit bat, Latidens salimali, (named after Indian ornithologist Salim Ali) is only found in this mountain range. Salim Ali's fruit bat is the only species in the genus Latidens. It is a medium-sized fruit bat, which lacks an external tail. The head is covered in blackish-brown fur which is paler at the base, the wing membrane and the long fur are light brown in colour, and the underparts are light grey-brown. The species was first collected in 1948 by a British naturalist called Angus Hutton, who misidentified the specimen as the common short-nosed fruit bat. The specimen was re-examined later by Kitti Thonglongya who recognised it as a new species. Very little is known of the ecology of this species, however all fruit bats play an extremely important role as pollinators and seed dispersal agents within their rainforest habitat. This species is entered in the Guinness Book of World Records in 1993 as one of the rarest bats of the world.[3]

The Hutton's pitviper Tropidolaemus huttoni (Smith, 1949) is an enigmatic species of venomous snake described from the High Wavy Mountains in 1949. It was described from two juveniles collected by Angus F. Hutton from beneath the leaves of the palm Ochlandra travancorica, locally called "eata". The species has not been recorded since its original description and no adults have yet been found. The most intriguing fact about this piviper is that it belongs to a genus whose other members, the closest living relatives of the Hutton's pitviper, are distributed in the Malayan Peninsula only. This poses serious biogeographical questions.

Arnetta vindhiana, commonly known as the Vindhyan bob, is a butterfly belonging to the family Hesperiidae. It is native to India.

The vangu or Malabar gray slender loris (Loris lydekkerianus malabaricus) is a subspecies of gray slender loris that is only found in the Meghamalai region of India. A member of the genus Loris, commonly known as the slender lorises, it is a small, nocturnal primate that is able to live in wet and dry forests, as well as lowland and highland forests. They prefer thick, thorny vegetation wherein they can easily escape predators and find the large assortment of insects that is the mainstay of their diet. The greatest concentrations of these slender lorises are found in the southeastern Ghats of India, a narrow strip of rainforest that runs down the length of western India.

The slender loris is about the size of a chipmunk, with long, pencil-thin arms and legs. It is between 6–10 inches (15–25 cm) long and has a small, vestigial tail. It weighs about 10.5–12 ounces (300–340 g). The slender loris' round head is dominated by two large, closely set, saucer-like brown eyes. They flank a long nose which ends in a heart-shaped knob. The eyes are surrounded by dark-brown to black circles of fur, while the bridge of the nose is white. It has a small, narrow lower jaw. The ears are large and round. Its coat is light red-brown or gray-brown on its back and dirty white on its chest and belly. The fur on its forearms, hands and feet is short. The slender loris has small finger nails on its digits. The second digit on the hand and foot are very short. They move on the same plane as the thumb, which helps them grasp branches and twigs.

The slender loris is an arboreal animal, spending most of its life in trees. Their movements are slow and precise. They like to travel along the top of branches. For the most part they hunt by themselves or in pairs at night, although they will come together and share a food supply. They live alone or with a mate and an infant. By day, they will sleep with up to seven other lorises in a hollow tree or sitting up in the angles of branches. They are very social at dusk and dawn, playing, wrestling and grooming each other.[4]

Highwavys is a view point that will afford a wonderful view of the entire mountains range of Varusanadu Hills. There few large private tea, spices and coffee plantations all around, notable include The Highwavys Estates owned by The Woodbriar Group, Ananda Plantations, Ponsiva Plantations and Feildmede Estate have the largest holdings of plantations in Meghamalai, an artificial lake and plenty of scope for making leisurely walks. Kardana Coffee Estate is situated in the High Wavy Mountains at 9°42′N 77°24′E﻿ / ﻿9.700°N 77.400°E﻿ / 9.700; 77.400.[5]

Six dams on the hill and originating place of Suruli Theertham (Suruli falls near Cumbum town) are popular attractions for tourists. From Manalar dam, one can view the deep Cumbum Valley and the villages of Theni district. The Department of Tourism has planned to introduce boat or ferry service to enable tourists to enjoy the pristine beauty of the hill.[6]

Vellimalai (Silver Mountain, 1,650 m) area is a heart of Meghamalai. Silver-lined clouds seem to rest gently on green hilltops and nestled somewhere in this region is the place where the river Vaigai originates. This lovely place will give an opportunity to see wild animals and aesthetically and scientifically managed tea gardens. this is near periyar tiger reserve

The Meghamalai Falls (called as Clouds land fall) occurs on Suruli River originating in the Meghamalai Hills. The special feature of the falls is that water is flowing down 190 feet through twin falls round the year. Frequent visits by elephants, spotted deer, gaur and other wild animals at dawn and dusk are a feast to the eyes. Forest Department officials have plans to assist tourists to view those wild animals.

Massive encroachments in the reserved forests of almost all divisions in the district have been posing a grave threat to the eco-system of Megamalai hills. Of the total 806.86 km2, about 400.77 km2 was degraded forest area. A total of 292.81 km2 falls under dense forest areas, of which only 22.43 km2 was tree bearing. About 220 out of total 430 km2 in the Gandamanur forest range under the Madurai Forest Division had been encroached for the past four decades. Large areas of Ulloothu Kavu, Anjaraipuli, Elamalaipoodu, Arasaradi, Bommarasapuram and neighbouring villages were also under encroachment. With an increase in population and their demands, vast stretches of land were either degraded or converted into unicrop areas, causing damage to the environment. The people settled in the hill tracts were solely dependent on the forests for livelihood. Conservation of natural forest in any form will help preserve biodiversity.[7]

Meghamalai mountain range can be approached two ways—from Theni via Chinnamanur and from Andipatti via Kandamanayakkanur. Both Theni and Andipatti can be easily accessed by road from Madurai and Dindigul. Theni, which is 76 km from Madurai. The approach via Chinnamannur is more scenic. Only forest lodges and panchayath rest house are available at the hill top. Prior reservation and permission is an absolute must. If looking for a night stay here, you can make room reservation from the forest check-post located 3 km from Chinnamannur on way to Meghamalai. Must reach the check-post at least before 5 PM, if you are looking for a night stay in Meghamalai. Day-trippers may stay in a number of moderately priced hotels in Theni, Chinnamanur and Andipatti. Distance from Madurai 130 km.Of late guest houses and coffee estate home-stays are available in Meghamalai and can be booked on the internet.

The website for Mehamalai has a warning against travelling there in June and July.[8]