The Shakti Peetha (Sanskrit: शक्ति पीठ, Śakti Pīṭha, seat of Shakti[1]) are significant pilgrimage sites in Shaktism, the goddess-focused Hindu tradition. They feature Shakti temples and attract Shakta devotees. There are 51 or 108 Shakti peethas by various accounts,[2][3] of which between 4 to 18 are named as Maha (major) in medieval Hindu texts.[2] Most of these historic places of goddess worship are in India, but some are in Nepal, Bangladesh, and one each in Tibet (Mansarovar), Sri Lanka and Pakistan.[3]

Various legends explain how the Shakti peetha came into existence. The most popular is based on the story of the death of goddess Sati, the grief and crying by her husband god Shiva who held her dead body, then started his dance of destruction, causing Sati's body to disintegrate and fall into pieces. The sites where these portions of Sati goddess fell, are the Shakti peetha.[2][4] 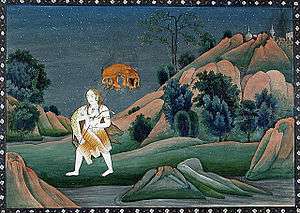 Shiva carrying the corpse of Dakshayani

Lord Brahma performed a yajna (Vedic ritual of fire sacrifice) to please Shakti and Shiva. Goddess Shakti emerged, separating from Shiva and helped Brahma in the creation of the universe. Brahma decided to give Shakti back to Shiva. Therefore, his son Daksha performed several yagnas to obtain Shakti as his daughter in the form of Sati. It was then decided that Sati was brought into this world with the motive of getting married to Shiva.

Daksha performed a yagna with a desire to take revenge on Lord Shiva near munimandala present Muramalla andhra pradesh. Daksha invited all the deities to the yajna except Lord Shiva and Sati. The fact that she was not invited did not deter Sati from attending the yagna. She expressed her desire to attend the yagna to Shiva, who tried his best to dissuade her from going. Shiva eventually relented and Sati went to the yagna. Sati, being an uninvited guest, was not given any respect at the yagna. Furthermore, Daksha insulted Shiva. Sati was unable to bear her father's insults toward her husband, so she immolated herself.

Enraged at the insult and the injury, Shiva in Virabhadra avatar destroyed Daksha's yagna, cut off Daksha's head, and later replaced it with that of a male goat as he restored him to life.Virabhadra didn't stop fighting he kept raging with anger .Gods prayed lord Vishnu. He came there and started fighting him. Still immersed in grief, Shiva picked up the remains of Sati's body, and performed the Tandava, the celestial dance of destruction, across all creation. The other Gods requested Vishnu to intervene to stop this destruction, towards which Vishnu used the Sudarshana Chakra, which cut through the Sati's corpse. The various parts of the body fell at several spots all through the Indian subcontinent and formed sites which are known as Shakti Peethas today.[5]

At all the Shakti Peethas, the Goddess Shakti is accompanied by her consort, Lord Bhairava (a manifestation of Lord Shiva). Shakti is an aspect of the Supreme Being Adi parashakti, the mother of the trimurti, the holy trinity in Hindu religion & scriptures.

The history of Daksha yagna and Shakti's self immolation had immense significance in shaping the ancient Sanskrit literature and even had impact on the culture of India. It led to the development of the concept of Shakti Peethas and there by strengthening Shaktism. Enormous stories in Puranas & other Hindu religious books took the Daksha yagna as the reason for its origin. It is an important incident in Shaivism resulting in the emergence of Shree Parvati in the place of Shakti Devi and making Shiva a grihastashrami (house holder) leading to the origin of Ganapathy and Subrahmanya.[6][7][8]

Shakti Peethas are shrines or divine places of the Mother Goddess. These are places that are believed to have enshrined with the presence of Shakti due to the falling of body parts of the corpse of Sati Devi, when Lord Shiva carried it and wandered throughout Aryavartha in sorrow. There are 51 Shakti Peeth linking to the 51 alphabets in Sanskrit. Each temple has shrines for Shakti and Kalabhairava, and mostly Shakti and Kalabharava in different Shakti Peeth have different names. 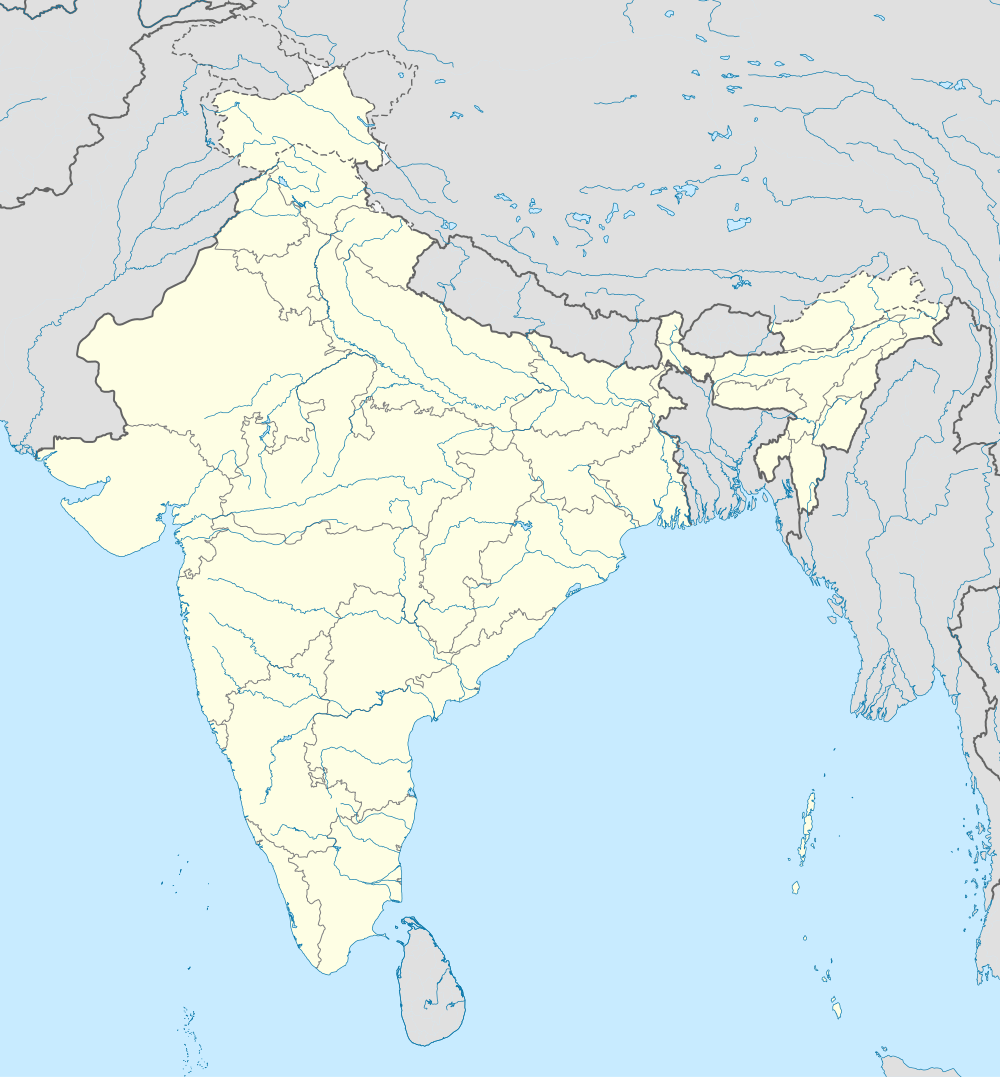 Some of the great religious texts like the Shiva Purana, the Devi Bhagavata, the Kalika Purana and the AstaShakti recognize four major Shakti Peethas (centers), like Bimala (Pada Khanda) (inside the Jagannath temple of Puri, Odisha), Tara Tarini (Sthana Khanda, Purnagiri, Breasts) (Near Berhampur, Odisha), Kamakhya Temple (Yoni khanda) (Near Guwahati, Assam) and Dakhina Kalika (Mukha khanda) (Kolkata, West Bengal) originated from the limbs of the Corpse of Mata Sati in the Satya Yuga. The Astashakti and Kalika Purana says (in Sanskrit):

Further explaining the importance of these four Pithas, the "Brihat Samhita" also gives the location of these Pithas as (In Sanskrit) "Rushikulya* Tatae Devi, Tarakashya Mahagiri, Tashya Srunga Stitha Tara Vasishta Rajitapara" (Rushikulya is a holy river flowing on the foot hill of the Tara Tarini Hill Shrine).

In the listings below:

Apart from these four there are 51 other famous Peethas recognised by religious texts. According to the Pithanirnaya Tantra the 51 peethas are scattered all over India, Sri Lanka, Bangladesh, Nepal, Tibet, Bhutan and Pakistan. The Shivacharita besides listing 51 maha-peethas, speaks about 26 more upa-peethas. The Bengali almanac, Vishuddha Siddhanta Panjika too describes the 51 peethas including the present modified addresses. A few of the several accepted listings are given below.[9] One of the few in South India, Srisailam in Andhra Pradesh became the site for a 2nd-century temple.[10]

First relating to Brahmanda Purana, one of the major eighteen Puranas, it mentions 64 Shakthi Peetha of Goddess Parvati in the Bharat or Greater India including present day India, Bhutan, Bangladesh, Nepal, Sri Lanka, some parts of Southern Tibet and parts of southern Pakistan. Another text which gives a listing of these shrines, is the Shakthi Peetha Stotram, written by Adi Shankara, the 9th-century Hindu philosopher.[12]

Rishi Markandeya composed the 'Devi Saptashati' or the seven hundred hymns extolling the virtues of the Divine Goddess at the shaktipeetha in Nashik. The idol is also leaning a little to the left to listen to the sages composition. The Saptashati or the "Durga Stuti" forms an integral part in the vedic form of Shakti worship.

The third eye of Mata Sati fell below a tree in a mortuary in the Ishan corner of Vakreshwar. This is on the bank of the north flowing Dwarka river in the east of Baidyanath. Here Mata Sati is called Chandi Bhagwai Ugra Tara and Bhairav is called Chandrachur. This Shaktipeeth is called Tarapith in Birbhum district West bengal , India.

The modern cities or towns that correspond to these 64 locations can be a matter of dispute, but there are a few that are totally unambiguous, these are mentioned in the Ashta Dasa Shakthi Peetha Stotram by Adi Shankara.[13] This list contains 18 such locations which are often referred to as Maha Shakthi Peeths.[14]

[*]Sharada Peeth: This temple is currently non-existent*.[15] Only ruins are found in these places. Its ruins are near the Line of Control (LOC)[16] between the Indian and Pakistani-controlled portions of the former princely state of Kashmir and Jammu. Instead, Sringeri Sharada Peetham, Sringeri in Karnataka even though not a Shakti Peetha is this aspect of the goddess. Requests have been made by the Hindu community in Pakistan to the Pakistani government to renovate the temple, the issue was raised by former Indian Home minister L. K. Advani to the Pakistan authorities[17] as a confidence building measure, by increasing the people to people interaction cross border.[16]

Among these, the Shakti Peethas at Kamakhya, Gaya and Ujjain are regarded as most sacred as they symbolise three most important aspects of mother Goddess viz. Creation (Kamarupa Devi), Nourishment (Sarvamangala Devi/Mangalagauri) and Annihilation (Mahakali Devi).

When observed carefully one can see that they lie in a perfect straight line from Kamakhya to Ujjain via Gaya symbolizing that every creation in this universe will annihilate one day without fail. With concepts like Hinduism and Ecology gaining importance, the geographical features of these temples are gaining importance.

Translation of the stotra

Goddess Shankari in Sri Lanka, Kamakshi in Kanchipuram Goddess Shrinkhala in Pradymna and Chamunda in Mysore

Goddess Maha Kali in Ujjain, Purhuthika in Peethika Goddess Girija in Odhyana and Manikya in the house of Daksha

Goddess Kama Rupi in the temple of Vishnu, Madhaveshwari in Allahabad Goddess giving flame in Jwala Mukhi and Mangala Gowri in Gaya

Goddess Vishalakshi in Varanasi, Saraswati in Kashmir These are the 18 houses of Shakti, which are rare even to the Devas

When chanted every evening, all the enemies would get destroyed all the diseases would vanish, and prosperity would be showered.