The Tokyo Metro Yurakucho Line (東京地下鉄有楽町線, Tōkyō Chikatetsu Yūrakuchō-sen) is a subway line in Japan owned and operated by the Tokyo subway operator Tokyo Metro. The line connects Wakōshi Station in Wakō, Saitama and Shin-Kiba Station in Kōtō, Tokyo. On maps, diagrams and signboards, the line is shown using the color "gold" (    ), and its stations are given numbers using the letter "Y".

The proper name as given in an annual report of the Ministry of Land, Infrastructure and Transport is Line No. 8 Yūrakuchō Line (8号線有楽町線, Hachi-gō-sen Yūrakuchō-sen).[2] According to the Tokyo urban transportation plan, however, it is more complicated. The line number assigned to the section south from Kotake-Mukaihara to Shin-Kiba is Line 8, but that of north of Kotake-Mukaihara to Wakōshi is Line 13, which indicates the section is a portion of Fukutoshin Line which shares the same number.

The Yurakucho Line has inter-running counterparts on its northern side, both of which are "major" Japanese private railway companies in Greater Tokyo. One is the Tōbu Railway at Wakōshi, north to Shinrinkōen. The other is the Seibu Railway at Kotake-Mukaihara with its bypass line Seibu Yūrakuchō Line connecting to its main Ikebukuro Line, through trains north to Kotesashi or Hannō.

According to the Tokyo Metropolitan Bureau of Transportation, as of June 2009 the Yurakucho Line is the fifth most crowded subway line in Tokyo, at its peak running at 173% capacity between Higashi-Ikebukuro and Gokokuji stations.[3]

Semi-express (準急) services ran on the Yurakucho Line between June 14, 2008 and March 6, 2010, operating twice hourly between Wakōshi and Shin-Kiba. Between Wakōshi and Ikebukuro, semi-express trains stopped only at Kotake-Mukaihara; between Ikebukuro and Shin-Kiba, trains stopped at all stations. The semi-express trains ran between rush hours during weekdays and more frequently on weekends and holidays. These services were abolished and replaced with local services on March 6, 2010.[4] 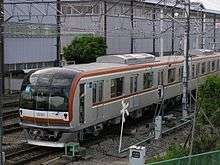 All types are operated as 10-car sets. 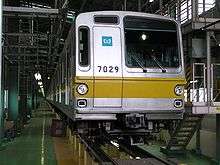 A branch line has been planned since the early 1980s from Toyosu Station, heading north via Kameari Station (on the Jōban Line) to Noda in northwest Chiba Prefecture.[7]

This article is issued from Wikipedia - version of the 1/13/2016. The text is available under the Creative Commons Attribution/Share Alike but additional terms may apply for the media files.