pronunciation ) is a Taluk and a municipality in the Nilgiris district in the state of Tamil Nadu, India. It is known for its production of Nilgiri tea. Coonoor is located at an altitude of 1,850 m above sea level, and is the second largest hill station in the Nilgiri hills after Ooty. It is an ideal base for a number of trekking expeditions leading into the Nilgiris. The Nearest airport is Coimbatore International Airport about 79 km from Coonoor town. As of 2011, the town had a population of 45,494. 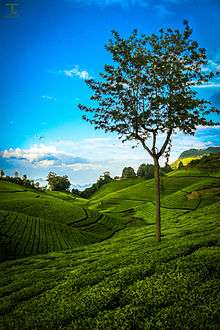 Coonoor's economy relies on seasonal tourist traffic during the summer months, and on the tea industry year round. The local populace almost entirely depends on the tea trade. The massive private tea plantations that surround the hills produce fresh green tea leaves which are picked, processed and packaged in bulk in local factories, for sale at auction houses in Coonoor, Coimbatore and Cochin. Coonoor also houses the UPASI - the South Indian Tea Board which is involved in the research, commerce and auction of the Tea produced. It also houses Indian army establishments such as Madras regimental center (MRC) and Defence services staff college (DSSC).

Spread in an area of 12 ha, Sim's Park has a collection of over 1,000 plant species. The botanical garden is partly developed in the Japanese style and derived its name from J. D. Sim, the secretary of the Madras Club in 1874. The key attraction of the park is the annual fruit and vegetable show held in May.[6]57th annual fruit show is to be held on 23 and 24 May 2015.[7] Dolphin's Nose Viewpoint is 10 km from Coonoor and provides a panoramic view of the vast expanse of the Nilgiri Hills and Catherine Falls. Tourists can trek from Lady Canning's Seat to Dolphin's Nose. Lamb’s Rock, about 5½ km from Coonoor is another vantage point. Droog Fort is located a distance of 13 km from Coonoor and was once used by Tipu Sultan in the 18th century. Law's Falls is a waterfalls located 5 km from Coonoor, on the way to Mettupalayam. Katary Falls has a power station.

Pomological Station is a research center of the State Agricultural Department for persimmon, pomegranates, and apricot. Pasteur Institute located near Sim’s park, was started in 1907. This institute develops vaccination for rabies. The Government operates a Silk Farm, though this is largely a research facility. Recently, Floriculture and strawberry cultivation have taken root.[8]

Schools are a significant contributor to the local economy. The expensive residential schools are a feature of the Nilgiris and Coonoor. Originally modelled as British boarding schools, these have now become comprehensive schools based on the Indian schooling systems.

Coonoor is well-connected by road with Ooty. The road that connects with Ooty is National Highway NH 67 is the busiest Nilgiri Ghat Road and is also one of the main access routes for the entire district. Alternatively, there is another route that links Coonoor to Kotagiri connecting with State Highway 15. Mettupalayam is the nearest railhead which is 46 km away. Coimbatore Junction is about 75  km. The Nilgiri Mountain Railway is one of the oldest mountain railways in India and was declared by the UNESCO as a World Heritage Site in July 2005. This railway links Coonoor to the town of Mettupalayam at the foot of the hills and Ooty. The nearest airport is Coimbatore International Airport which has direct connections to Mumbai, Bangalore, Singapore, Chennai, Hyderabad, Sharjah and New Delhi.