The Keihin-Tōhoku Line (京浜東北線, Keihin-tōhoku-sen), is a railway line in Japan which connects the cities of Saitama, Kawaguchi, Tokyo, Kawasaki, and Yokohama. It is part of the East Japan Railway Company (JR East) network. The line's name is derived from the characters for Tokyo (東京), Yokohama (横浜) and the Tōhoku Main Line (東北本線). The Keihin-Tōhoku Line officially follows portions of the Tōhoku Main Line and Tōkaidō Main Line. Between Ueno and Akabane stations the Keihin-Tohoku and Tohoku Main lines are physically separate and thus alternate routes.

Trains run every 2–3 minutes at peak hours, every 5 minutes during the daytime, and less frequently the rest of the time. In most instances, these trains are classified as "Local" (各駅停車, Kakueki-Teisha), stopping at all stations en route. However, during the daytime, trains are classified as "Rapid" (快速, kaisoku). These rapid trains skip some stations in central Tokyo, where it runs parallel to the Yamanote Line.

Rolling stock used in the past

Rolling stock transitions since the 1950s

The line opened on 20 December 1914 as an electrified passenger line connecting Shinagawa Station in Tokyo with Takashimacho Station in Yokohama.[5] (The latter station was renamed Yokohama Station in August 1915, when the former Yokohama Station was renamed Sakuragicho Station).[5] It was originally called the Tokaido Electric Line (東海道電車線)m and was subsequently renamed the Keihin Line (京浜線).[5] From 30 December 1915, services were extended south to the new Sakuragicho Station.[5]

The Keihin Line service was extended north via the Tohoku Main Line to Akabane Station in February 1928, and to Ōmiya Station in September 1932.[5]

The Keihin Line initially had third-class and second-class cars, analogous to today's ordinary cars and Green Cars respectively. Second-class service ended in 1938 in order to accommodate special military cars during World War II. The military seating was converted to seating for women and children after the war, and back to ordinary seating in 1973 amid overcrowding concerns: second-class service was briefly restored in the 1950s but abandoned shortly thereafter. 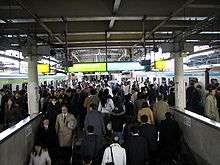 From November 1956, the Keihin-Tohoku Line was physically separated from the Yamanote Line between Tamachi and Tabata, allowing more frequent service.[5] Through service with the Negishi Line began on 19 May 1964.[5] 10-car trains (103 series) began operating from 1 April 1966.[5]

In January 2012, it was announced that a new station would be built on the Yamanote Line and Keihin-Tohoku Line between Shinagawa and Tamachi stations.[7] The distance between Shinagawa and Tamachi stations is 2.2 km.[7] The new station will be constructed on top of the current 20-hectare railyard which is undergoing rationalization and redevelopment by JR East. The Yamanote Line and the Keihin Tohoku Line tracks will be moved slightly to the east to be aligned closer to the Tokaido Shinkansen tracks. The area on the west side of the yard made available will be redeveloped with high-rise office buildings, creating an international business center with good connections to the Shinkansen and Haneda Airport.[7] The new station is scheduled to open in time for the 2020 Summer Olympics to be held in Tokyo.[8]

At around 01:11 in the morning of 23 February 2014, an empty stock train operating from Sakuragicho to Kamata hit a track maintenance vehicle on the track close to Kawasaki Station.[9] The first two cars of the 10-car E233 series train derailed, with the first car ending up on its side.[10] The train was carrying no passengers, and the driver and conductor escaped with minor injuries.[11]