Ōmiya Station (大宮駅, Ōmiya-eki) is a railway station in Ōmiya-ku, Saitama, Japan. It is a major interchange station for the East Japan Railway Company (JR East), and is also operated by the private railway operator Tobu Railway.

The following lines serve the station.

These are five ground-level island platforms. Tracks 5 and 10 are through tracks not served by platforms.

These are three elevated island platforms at the third-floor level.

These are two underground island platforms.

The Tobu platforms in March 2016

These platforms are bay platforms.

A single platform on the middle of a balloon loop. 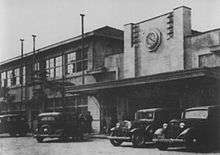 In 1894, a railway workshop was opened to the north of the station, and this facility is still operated by JR East and Japan Freight Railway Company.

The JR East passenger figures for previous years are as shown below.

Local and late-night buses and intercity coaches including ones to Narita International Airport[17] and Haneda Airport[18] airports also depart from this station.[19]