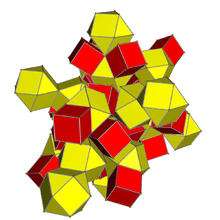 In geometry, the rectified 24-cell or rectified icositetrachoron is a uniform 4-dimensional polytope (or uniform 4-polytope), which is bounded by 48 cells: 24 cubes, and 24 cuboctahedra. It can be obtained by reducing the 24-cell's cells to cubes or cuboctahedra.

E. L. Elte identified it in 1912 as a semiregular polytope, labeling it as tC24.

It can also be considered a cantellated 16-cell with the lower symmetries B4 = [3,3,4]. B4 would lead to a bicoloring of the cuboctahedral cells into 8 and 16 each. It is also called a runcicantellated demitesseract in a D4 symmetry, giving 3 colors of cells, 8 for each.

A rectified 24-cell having an edge length of √2 has vertices given by all permutations and sign permutations of the following Cartesian coordinates:

The dual configuration with edge length 2 has all coordinate and sign permutations of:

There are three different symmetry constructions of this polytope. The lowest

construction can be doubled into

by adding a mirror that maps the bifurcating nodes onto each other.

can be mapped up to

symmetry by adding two mirror that map all three end nodes together.

The vertex figure is a triangular prism, containing two cubes and three cuboctahedra. The three symmetries can be seen with 3 colored cuboctahedra in the lowest

construction, and two colors (1:2 ratio) in

, and all identical cuboctahedra in

The rectified 24-cell can also be derived as a cantellated 16-cell:

This article is issued from Wikipedia - version of the 12/8/2015. The text is available under the Creative Commons Attribution/Share Alike but additional terms may apply for the media files.