The complete set of convex uniform polypeta has not been determined, but most can be made as Wythoff constructions from a small set of symmetry groups. These construction operations are represented by the permutations of rings of the Coxeter-Dynkin diagrams. Each combination of at least one ring on every connected group of nodes in the diagram produces a uniform 6-polytope.

Uniform 6-polytopes with reflective symmetry can be generated by these four Coxeter groups, represented by permutations of rings of the Coxeter-Dynkin diagrams.

There are 6 categorical uniform prisms based on the uniform 5-polytopes.

There is one infinite family of uniform triaprismatic families of polytopes constructed as a Cartesian products of three regular polygons. Each combination of at least one ring on every connected group produces a uniform prismatic 6-polytope.

In addition, there are infinitely many uniform 6-polytope based on:

There are 32+4−1=35 forms, derived by marking one or more nodes of the Coxeter-Dynkin diagram. All 35 are enumerated below. They are named by Norman Johnson from the Wythoff construction operations upon regular 6-simplex (heptapeton). Bowers-style acronym names are given in parentheses for cross-referencing.

The coordinates of uniform 6-polytopes with 6-simplex symmetry can be generated as permutations of simple integers in 7-space, all in hyperplanes with normal vector (1,1,1,1,1,1,1).

See also list of A6 polytopes for graphs of these polytopes.

There are 63 forms based on all permutations of the Coxeter-Dynkin diagrams with one or more rings.

They are named by Norman Johnson from the Wythoff construction operations upon the regular 6-cube and 6-orthoplex. Bowers names and acronym names are given for cross-referencing.

See also list of B6 polytopes for graphs of these polytopes.

This family has 3×16−1=47 Wythoffian uniform polytopes, generated by marking one or more nodes of the D6 Coxeter-Dynkin diagram. Of these, 31 (2×16−1) are repeated from the B6 family and 16 are unique to this family. The 16 unique forms are enumerated below. Bowers-style acronym names are given for cross-referencing.

See list of D6 polytopes for Coxeter plane graphs of these polytopes.

There are 39 forms based on all permutations of the Coxeter-Dynkin diagrams with one or more rings. Bowers-style acronym names are given for cross-referencing. The E6 family has symmetry of order 51,840.

See also list of E6 polytopes for graphs of these polytopes.

In 6 dimensions and above, there are infinite amount of non-Wythoffian convex uniform polytopes as the Cartesian product of the Grand antiprism in 4 dimensions and a regular polygon in 2 dimensions. It is not yet proven whether or not there are more. 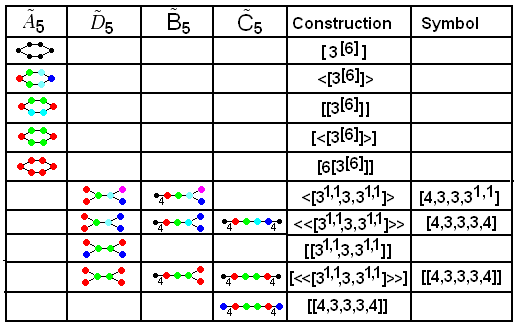 Coxeter-Dynkin diagram correspondences between families and higher symmetry within diagrams. Nodes of the same color in each row represent identical mirrors. Black nodes are not active in the correspondence.

There are four fundamental affine Coxeter groups and 27 prismatic groups that generate regular and uniform tessellations in 5-space:

Regular and uniform honeycombs include:

Notes on the Wythoff construction for the uniform 6-polytopes

Construction of the reflective 6-dimensional uniform polytopes are done through a Wythoff construction process, and represented through a Coxeter-Dynkin diagram, where each node represents a mirror. Nodes are ringed to imply which mirrors are active. The full set of uniform polytopes generated are based on the unique permutations of ringed nodes. Uniform 6-polytopes are named in relation to the regular polytopes in each family. Some families have two regular constructors and thus may have two ways of naming them.

Here's the primary operators available for constructing and naming the uniform 6-polytopes.

The prismatic forms and bifurcating graphs can use the same truncation indexing notation, but require an explicit numbering system on the nodes for clarity.