A regular decagon has all sides of equal length and each internal angle will always be equal to 144°.[1] Its Schläfli symbol is {10} [2] and can also be constructed as a truncated pentagon, t{5}, a quasiregular decagon alternating two types of edges.

The area of a regular decagon of side length a is given by:[3]

In terms of the apothem r (see also inscribed figure), the area is:

In terms of the circumradius R, the area is:

An alternative formula is

where d is the distance between parallel sides, or the height when the decagon stands on one side as base, or the diameter of the decagon's inscribed circle. By simple trigonometry,

and it can be written algebraically as

, where ϕ is the golden ratio,

As 10 = 2 × 5, a power of two times a Fermat prime, it follows that a regular decagon is constructible using compass and straightedge, or by an edge-bisection of a regular pentagon.[4]

An alternative (but similar) method is as follows:

The golden ratio in decagon

Both in the construction with given circumcircle[5] as well as with given side length is the golden ratio dividing a line segment by exterior division the determining construction element.

Decagon with given circumcircle,[5] animation

Decagon with a given side length,[6] animation 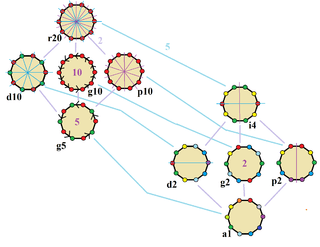 These 8 symmetries can be seen in 10 distinct symmetries on the decagon, a larger number because the lines of reflections can either pass through vertices or edges. John Conway labels these by a letter and group order.[7] Full symmetry of the regular form is r20 and no symmetry is labeled a1. The dihedral symmetries are divided depending on whether they pass through vertices (d for diagonal) or edges (p for perpendiculars), and i when reflection lines path through both edges and vertices. Cyclic symmetries in the middle column are labeled as g for their central gyration orders.

The highest symmetry irregular decagons are d10, a isogonal decagon constructed by five mirrors which can alternate long and short edges, and p10, an isotoxal decagon, constructed with equal edge lengths, but vertices alternating two different internal angles. These two forms are duals of each other and have half the symmetry order of the regular decagon.

Coxeter states that every parallel-sided 2m-gon can be divided into m(m-1)/2 rhombs. For the decagon, m=5, and it can be divided into 10 rhombs, with one example shown below. This decomposition can be seen as 10 of 80 faces in a Petrie polygon projection plane of the 5-cube. A second dissection is based on 10 of 30 faces of the rhombic triacontahedron.[8]

A skew decagon is a skew polygon with 10 vertices and edges but not existing on the same plane. The interior of such an decagon is not generally defined. A skew zig-zag decagon has vertices alternating between two parallel planes.

A regular skew decagon is vertex-transitive with equal edge lengths. In 3-dimensions it will be a zig-zag skew decagon and can be seen in the vertices and side edges of a pentagonal antiprism, pentagrammic antiprism, and pentagrammic crossed-antiprism with the same D5d, [2+,10] symmetry, order 20.

These can also be seen in these 4 convex polyhedra with icosahedral symmetry. The polygons on the perimeter of these projections are regular skew decagons.

The regular skew decagon is the Petrie polygon for many higher-dimensional polytopes, shown in these orthogonal projections in various Coxeter planes:[9] The number of sides in the Petrie polygon is equal to the Coxeter number, h, for each symmetry family.