Ludmya Bourdeau "Mia" Love (born December 6, 1975) is an American politician and the U.S. Representative from Utah's 4th congressional district. She is the first Haitian American and the first black female Republican in Congress,[1][2] as well as the first African American to be elected to Congress from Utah.[3]

Born to Haitian parents in Brooklyn, New York, Love was elected as the Mayor of Saratoga Springs, Utah, serving from 2010 to 2014.[4] She was previously on its city council. In 2012, Love ran for Utah's 4th congressional district, losing narrowly to incumbent Democratic Representative Jim Matheson. She was a speaker at the 2012 Republican National Convention. She was elected as a Republican to the House of Representatives on November 4, 2014, defeating Democratic opponent Doug Owens, son of the former Congressman Wayne Owens and defeated him again in their 2016 rematch to win her second term.[1][2]

Love was born Ludmya Bourdeau on December 6, 1975, in Brooklyn, New York, the daughter of Mary and Jean Maxine Bourdeau.[5] At a time of political repression, her parents emigrated together from Haiti in 1973,[6] leaving their two older children behind with family.[7][8] Her father had been threatened by the Tonton Macoute, the secret police in Haiti, and her parents traveled to the United States on a tourist visa.[9] They spoke only French when they arrived. Her father became a paint-company manager and her mother worked as a nurse.[10]

Love's birth enabled her parents to gain a US residency permit (green card) under an immigration law that favored immigrants from the Western Hemisphere who had a child born in the United States; it expired in early 1976.[7][11] They became naturalized citizens.[12]

When Love was five, her family moved from Brooklyn to Norwalk, Connecticut.[13] Love attended Norwalk High School.[9] She was raised as a Roman Catholic in the faith of her parents. After the family settled in Norwalk, her parents brought her older siblings from Haiti to reunite the family.[2][14]

After college, she worked at Sento Corporation and the Ecopass Corporation.[16] She was also a flight attendant with Continental Airlines.[11][17] She moved to Utah in 1998 after converting to The Church of Jesus Christ of Latter-day Saints and while working for Continental. There she married Jason Love.

Love began to be active in civic affairs when she served as the community spokesperson in Saratoga Springs in an effort to persuade the developer of her neighborhood to spray against flies.[9] The city of 18,000 near Salt Lake City was established in 1997 and has had rapid growth.

In 2003 Love won a seat on the Saratoga Springs City Council. She was the first female Haitian-American elected official in Utah County; she took office in January 2004.[17] During an economic downturn, as part of the city council Love approved a transition from the agriculture tax to municipal tax. She worked with other city council members to cut expenses, reducing the city's shortfall during the economic downturn from $3.5 million to $779,000. Saratoga Springs now has the highest possible bond rating for a city of its size.[18]

After six years on the Council, Love was elected mayor,[19] winning with 861 votes to 594 for her opponent Jeff Francom.[20] She served from January 2010 to January 2014.[16] During her term, Love led the city in dealing with natural disasters, including a wildfire, followed shortly afterward by a severe mudslide.[21]

Love ran in Utah's 4th congressional district, which was created after the 2010 Census.[22][23] She competed for the Republican nomination against attorney Jay Cobb and State Reps. Stephen Sandstrom of Orem and Carl Wimmer of Herriman; she won the nomination on April 21, 2012, at the 2012 Utah Republican Party Convention with over 70 percent of the vote. She faced six-term Democratic incumbent Jim Matheson in the general election, who while living in the 2nd congressional district ran in the new 4th district. losing some of his reliably Democratic constituents.

In 2012, National Journal named Love one of ten Republicans to follow on Twitter.[26] When speaking to the 2012 Republican National Convention on August 28, 2012, she discussed lessons learned from her parents, immigrants from Haiti who fled political repression.[27] She said, "Mr. President, I am here to tell you we are not buying what you are selling in 2012."[28]

In September 2012, questions arose about her parents' immigrant status. Forbes investigated a claim in an article that month in Mother Jones that no law existed in 1976 that would have allowed Love's parents to become citizens of the United States after her birth. Forbes found that immigrants who had been residents of the Western Hemisphere could get long-term residency permits (green cards) if they had a child born in the United States. Mother Jones issued a correction.[5][7][29] Love did not make her family's papers available for review. In an October 2012 interview, her father said that Mia's birth as a U.S. citizen was key to him and his wife gaining permanent legal status and ultimately citizenship.[9]

Love lost the election to Jim Matheson by 768 votes out of 245,277 votes cast,[30] a difference of 0.31%. She was regarded to have run a weak campaign, switching campaign managers three times, trying to "nationalize" the race rather than focus on local issues, and missing interviews and appointments because of rifts in her campaign staff.[31] 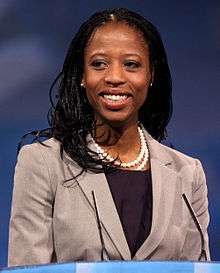 In March 2013, Love said she was seriously considering another run against Matheson.[32] In May 2013 she announced she would run in 2014. As of July 2013, Love had raised over $475,000 for her campaign.[33] Love was an opening speaker at the 2013 Western Conservative Summit. She spoke of the need for increased grassroots organization in the GOP, and the need to be independent from the government.[34]

In August 2013, Love was chosen by Newsmax as an "Up and Comer" in their list of top "25 Influential Women of the GOP," given her visible position as a young black female Republican.[35] In November 2013, Love acknowledged the growing consensus that the Tea Party needed to shift away from being the "party of no," disagreeing with its part in forcing a federal government shutdown over the budget.[36] She later reiterated her support for the philosophy of the Tea Party and many of its leaders, including Utah Sen. Mike Lee.[37]

On December 17, 2013, Matheson announced that he would not run for re-election. Love was ranked as the favored candidate due to her name recognition and characteristics of the district. In early October 2014, the National Journal listed Utah's 4th district as the number one most likely district to change hands in November.[38]

In early 2014 Love was made a member of the Republican National Committee's National Advisory Council on African-American outreach.[39] On April 26, 2014 Love won the Republican nomination for the 4th congressional district at the Utah Republican Convention, with 78% of the vote at the convention.[28][40]

On election night, Owens led Love until late in the evening, when she pulled ahead and ultimately won by more than 4,000 votes.[28][41]

Love ran for re-election in 2016. She defeated Democrat Doug Owens in the general election with 53% of the vote.[42][43] David Scott, a Democratic Representative from Georgia, gave $1,000 to Love's campaign.[44]

With the start of the new congress, Love was appointed to the House Financial Services Committee.[47] Love joined the Congressional Black Caucus in January 2015 after taking her seat.[48] While campaigning in 2012, Love had said that if elected, she would “join the Congressional Black Caucus and try to take that thing apart from the inside out.” She described the mainly Democratic Caucus as characterized by

...demagoguery. They sit there and ignite emotions and ignite racism when there isn’t. They use their positions to instill fear. Hope and change is turned into fear and blame. Fear that everybody is going to lose everything and blaming Congress for everything instead of taking responsibility.[49]

In May 2015 she was a lead sponsor along with Duncan Hunter of HR 2518 the Student Right to Know Before You Go Act, designed to increase the amount of information universities and colleges are required to provide prospective students.[50]

In October 2015, Love was named to serve on the Select Investigative Panel on Planned Parenthood.[51]

In April 2016, Love got her first bill through the U.S. House. HR3791, which was approved in a 247-171 vote, raises limits on how large community banks can grow, which Love says will make more credit available.[52]

Love says she favors "fiscal discipline, limited government, and personal responsibility."[19] She has also said that she asks herself three questions whenever she approaches an issue: "Is it affordable? Is it sustainable? Is it my job?"[53]

Love was described as a Tea Party conservative in 2012.[31] In a 2015 article titled "How 'tea party' is Mia Love?", the Washington Post wrote that "Love's rhetoric from 2012 to 2014 changed a bit, even as her policy positions remained fairly constant" and noted that Love had "angered some conservatives when she questioned the tea party driven government shutdown in 2013 over Obamacare."[54] A blogger for libertarian-leaning magazine Reason described her as a "Trojan horse libertarian" due to her stance on homeschooling, federal control of land, and other issues.[55]

During her first campaign for Congress, Love proposed deep cuts to federal spending, particularly in the area of entitlement spending.[31] She also supports cutting taxes.[31] She supported cuts to foreign aid and tort reform.[57] She believes that the federal government should have less power.[57] In 2014, Love focused more on balancing the budget, avoiding stating specific cuts needed but identifying the goal of matching spending to revenue.[58] Love supported the March 2015 budget, which required an increase in federal employee contributions to their retirement funds.[59]

On October 8, 2016, Love issued a statement that she would not vote for Republican candidate Donald Trump in the upcoming presidential election and urged him to withdraw from the race for the good of the party and the country.[60]

Raised a Roman Catholic, Love joined The Church of Jesus Christ of Latter-day Saints after graduating from college in 1998.[61] While working as a flight attendant, she moved to Utah as part of her work. She also wanted to be closer to a Mormon temple and to learn more about her faith.[9] There she got to know Jason Love, whom she had met briefly when he was an LDS missionary in Connecticut.

The two were married in December 1998, four months after their first date. Love turned down an offer to appear in the Broadway show Smokey Joe's Café that would start two days before her marriage.[9][62] When first married, the Loves lived in American Fork. They have three children together. The Loves decided that Jason should continue his software work and maintain their residence in Utah.[63]