James Austin Scott (born December 10, 1969) is an American politician who has been the U.S. Representative for Georgia's 8th congressional district since 2011. He is a member of the Republican Party.

Scott's father, Dr. Jim Scott, is an orthopedic surgeon and his mother, Becky, is a teacher in the public school system. Scott graduated from the University of Georgia with a B.B.A. in Risk Management and Insurance. He also passed the Series 7 Exam.[1]

Scott is president of The Southern Group, LLC and a partner in Lockett Station Group, LLC.[2] 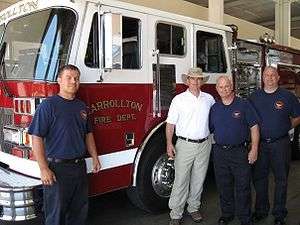 Austin Scott meets with members of the Carrollton, GA fire department on July 20, 2009 during the Walk of Georgia.

Scott originally planned to campaign for Governor of Georgia, announcing his campaign in January 2009. He made headlines for walking more than 1,000 miles around the state in his "Walk of Georgia",[4] introducing a bill to abolish tolls on Georgia 400, and leading the charge in pressuring Georgia State Attorney General Thurbert Baker to file a lawsuit against the Federal government over the controversial health care reform bill passed in March 2010.[5][6][7][8] In April 2010, Scott withdrew from the race for Governor to instead run for U.S. Congress.

In 2010 Scott signed a pledge sponsored by Americans for Prosperity promising to vote against any Global Warming legislation that would raise taxes.[9]

The Georgia General Assembly redrew the 8th after the 2010 census. Notably, most of Macon and surrounding Bibb County (except for a sliver in the north) were drawn into the neighboring 2nd District. Macon had been the heart of the 8th and its predecessors for more than a century. To make up for the loss of population, the General Assembly pushed the 8th all the way to the Florida border, adding Thomasville and most of Valdosta from the old 2nd. The old 8th already had a significant Republican lean, with a Cook Partisan Voting Index of R+10. However, the new 8th has a CPVI of R+15, making it the 11th most Republican district in the Eastern Time Zone and one of the most Republican districts in the country.

Scott was unopposed in both the primary and general elections.[10]

Scott was unopposed for a third term.

In 2016, Scott faced a Democratic opponent for the first time since his initial run for the seat, from private investigator James Neal Harris. However, Scott turned back this challenge fairly easily, taking 67.6 percent of the vote and carrying every county in the district.[11]

Scott resides in Tifton with his wife, Vivien, and son, Wells. The Scotts are members of First Baptist Church of Tifton.[12][13]

Scott is an opponent of same-sex marriage and is in favor of a Federal Marriage Amendment. He voted no against the 2013 renewal of the Violence Against Women Act. He is opposed to abortion and believes that human life begins at conception. He is favor of capital punishment. He is against gun control. He is in favor of a Balanced budget amendment.[14]