Thomas Jeb Hensarling[1] (born May 29, 1957), known as Jeb Hensarling, is an American politician who has served as a member of the United States House of Representatives from Texas's 5th congressional district since 2003. A member of the Republican Party, Hensarling currently chairs the House Financial Services Committee, and has previously served as the chairman of the House Republican Conference from 2011 to 2013. He has endorsed Donald Trump for President of the United States.

Hensarling was born in Stephenville, the seat of government of Erath County in Central Texas; he was reared on the family farm in College Station.[1] He is the son of Mary Ann (Brock) and Charles Andrew "Chase" Hensarling (1928–2014), a 1949 graduate of Texas A&M University and a United States Army officer, who was engaged in the poultry business. His parents married in 1953.[1] Jeb Hensarling has one brother, James Andrew Hensarling (born 1954), and a sister, Carolyn Hensarling Arizpe.[2]

Like his late father,[3] Jeb Hensarling graduated from Texas A&M University; he received a bachelor's degree in economics in 1979. In 1982, he earned a Juris Doctor degree from the University of Texas School of Law at Austin. He is an Eagle Scout.

Prior to serving in Congress, Hensarling was State Director for Texas Senator Phil Gramm from 1985 until 1989. From 1991 to 1993, he served as executive director of the Republican Senatorial Committee.

Hensarling next served as a vice president at two companies before becoming owner of San Jacinto Ventures in 1996 and CEO of Family Support Assurance Corporation in 2001. He served as vice president of Green Mountain Energy from 1999 to 2001.

A December 31, 2005 article in National Review profiled his work as the country's "budget nanny", saying that he has replaced his mentor, former Senator Phil Gramm, in this role. Hensarling's proposed legislation is said to intend to force Congress to "decide how much money they can afford to spend, and then prioritize within those limits." The article says that "the chief problem with any proposal to reform the budget process is that it excites almost nobody."

After the 2012 election, Hensarling was elected as chairman of the House Committee on Financial Services, succeeding Rep. Spencer Bachus (R-Ala.).[4][5] 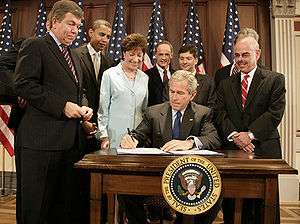 Hensarling opposed the Homeowner Flood Insurance Affordability Act of 2013 (H.R. 3370; 113th Congress), a bill that would delay some of the reforms to the National Flood Insurance Program.[6] Hensarling criticized the bill, saying the bill would "postpone actuarially sound rates for perhaps a generation... (and) kill off a key element of risk-based pricing permanently, which is necessary if we are to ever transition to market competition."[6] Hensarling criticized the National Flood Insurance Programs for regularly underestimating flood risk.[6] 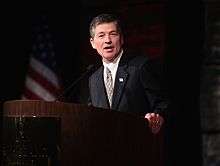 Hensarling was co-author of a Constitutional amendment (known as the Spending Limit Amendment) that would prohibit federal spending from growing faster than the economy.

Hensarling has campaigned for Congress to enact a one-year moratorium on all Congressional earmarks, saying that the process needs to be overhauled. In 2007, he introduced the Taxpayer Bill of Rights. He also co-authored the Taxpayer Choice Act.

A vocal critic of the Consumer Financial Protection Bureau (CFPB), he has received $183,400 from the payday lending industry since the beginning of 2013 (directly and through his political action committee), according to a report from the nonprofit Americans for Financial Reform.[8][9][10]

In January 2008, Hensarling was co-author of the Economic Growth Act of 2008.

In May 2008, Hensarling campaigned for the Republican party leadership in the House to agree to a special session to give lawmakers to air their views on a new policy platform and share ideas on how to define themselves to better advantage going into the 2008 election.

On January 29, 2010, during President Barack Obama's meeting with House Republicans, Hensarling challenged Obama's position on the budget, asserting that the Obama White House was increasing the national deficit at the same rate per month that the previous President had increased it per year. President Obama responded with the following: "the whole question was structured as a talking point for running a campaign....[t]he fact of the matter is that when we came into office, the deficit was $1.3 trillion. So when you say that suddenly I've got a monthly budget that is higher than the annual – or a monthly deficit that's higher than the annual deficit left by Republicans, that's factually just not true, and you know it's not true."[11] The Congressional Budget Office issued a projection in January 2009, before Obama took office, that the budget deficit would reach $1.2 trillion that year.[12]

no one truly knows if this plan will work – though we all hope that it does. No one knows the true amount of taxpayer exposure. Treasury could spend $700 billion in no time flat and come right back to Congress for $700 billion more. Some believe the taxpayer will actually make money in the deal and I hope that proves true. But history as a guide, I have strong fears it will not. At what point do we finally bailout the American taxpayer from the unconscionable burden he or she faces from out of control Washington spending? I fear that the legislation passed by Congress remains more of a bailout than a work out. I fear it undermines the ethic of personal responsibility. I fear that it rewards bad behavior and punishes good. But my greatest fear is that it changes the role of the federal government in our free market economy, which despite its current problems, remains the envy of the world. How can we have capitalism on the way up and socialism on the way down? If we lose our ability to fail will we not in turn lose our ability to succeed? If Congress bails out some firms and sectors, how can it say no to others? We must always be very careful to ensure that any remedy does allow short-term gain to come at the cost of even greater long-term pain – that being the slippery slope to socialism. The thought of my children growing up in America with less freedom and less opportunity is a long-term pain I cannot bear.

Following September 29 House vote, the Dow Jones Industrial Average dropped 777 points in a single day, its largest single-day point drop ever. The House subsequently passed the bill in a second vote on October 3.

On November 19, 2008 Hensarling was appointed by United States House of Representatives Minority Leader John Boehner to serve on the five-member Congressional Oversight Panel created to oversee the implementation of the Emergency Economic Stabilization Act. He was the lone dissenting member on the "Accountability for the Troubled Asset Relief Program" report issued by the panel on January 9, 2009.[13][14]

Prior to Eric Cantor's primary defeat, Hensarling was mentioned as a potential rival to Cantor to succeed John Boehner as leader of the House Republicans.[18][19]