John Lee Ratcliffe (born October 20, 1965) is an American politician who serves as the Congressman for Texas's 4th congressional district. The district stretches from the outer eastern suburbs of the Dallas-Fort Worth Metroplex to Texarkana, and includes Sherman, Bonham, Denison and Rockwall

He defeated 17-term incumbent Ralph Hall, who was the oldest member of Congress at the time, in the runoff primary election on May 27, 2014. Ratcliffe was unopposed in the November 4, 2014 general election and was sworn in as a member of the 114th United States Congress on January 6, 2015. On November 8, 2016 Ratcliffe was re-elected to a second term in Congress after earning over 88% of the vote. This marked one of the largest margins of victory for a contested general election in the district's history.

Ratcliffe was born the youngest of six children. Both of his parents were teachers.[3] In 1987, Ratcliffe graduated from the University of Notre Dame with a B.A. in Government and International Studies. He earned his J.D. from Southern Methodist University Dedman School of Law in 1989.[4]

He is board certified in Civil Trial Law by the National Board of Trial Advocacy. He has served as Adjunct Professor of Law at various law schools, including SMU and Texas Wesleyan University. Between 2004–2012, he was elected to four consecutive terms as mayor of Heath, Texas.[5]

In 2004, Republican President George W. Bush appointed Ratcliffe to be Chief of Anti-Terrorism and National Security for the Eastern District of Texas in the U.S. Department of Justice. In 2007, he was appointed United States Attorney of the Eastern District of Texas. It covered 33,000 square miles, including almost all of the 4th Congressional District. He managed 100 federal prosecutors, 6 district offices, and a $12 million budget allocated by the DOJ. On April 16, 2008, “Operation Plymouth Rock” led to the successful prosecution of hundreds of illegal aliens who unlawfully gained employment, which resulted in a $4.5 million criminal penalty.[4] Following his public service, he went back into private law practice, becoming a partner with the Ashcroft Law Firm, LLC. He served as an aide to Mitt Romney as part of a transition team established before the 2012 elections for vetting potential government appointees.[6]

Ratcliffe decided to run in the Republican primary against 17-term incumbent Congressman Ralph Hall of Texas's 4th congressional district. At 91 years old, Hall was the oldest member of Congress and the oldest person ever to serve in the House of Representatives. The Dallas Morning News wrote that Ratcliffe was Hall's "most serious political challenge in years."[7] In a primary where Hall had begun to look increasingly vulnerable, Ratcliffe received the endorsement of the Dallas Morning News which applauded Hall's long record of public service but cited Ratcliffe's "impressive credentials" and the need for "new ideas and fresh energy."[8] No Democrat even filed, though the 4th is so heavily Republican that any Democratic candidate would have faced nearly impossible odds in any event. With a Cook Partisan Voting Index of R+25, it is the fifth most Republican district in Texas and tied for the 13th most Republican district in the nation.

In the March 4 primary, Ratcliffe finished second with 29 percent of the vote, behind Hall's 45 percent. However, since Hall came up short of a majority, a runoff was forced on May 27. Ratcliffe was subsequently endorsed by the Tea Party Express, the Senate Conservatives Fund, and Club For Growth. Hall was endorsed by the National Rifle Association, former Congressman Ron Paul, congresswoman Michele Bachmann, and former Arkansas governor Mike Huckabee.[9]

In the May 27 runoff, Ratcliffe defeated Hall with 53 percent of the vote to Hall's 47 percent. Ratcliffe won 11 of the district's 18 counties, including the four largest (Grayson, Rockwall, Hunt and Lamar). 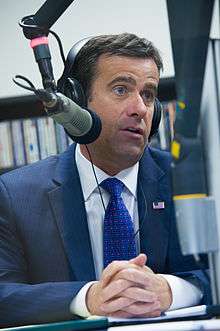 John Ratcliffe during an interview with KETR in February 2015

Although it is very rare in any event for a primary challenger to defeat a sitting congressman, Ratcliffe's victory was historic as it marked the first time that a sitting Republican congressman in Texas had been ousted in a primary. Incumbents had previously been successful in all 257 attempts.[10] Hall's defeat was also the first by an incumbent member of Congress in the 2014 election cycle. Ratcliffe was sworn in as a member of the 114th United States Congress on January 6, 2015. He is just the fourth person to represent the district since it was created in 1903.

On March 1, 2016 Ratcliffe easily defeated two primary challengers by earning 68% percent of the vote total. He finished 47 percentage points ahead of the second-place finisher. As in 2014, he faced no major-party opposition.

The Dallas Morning News said in April 2016 that "Ratcliffe’s first term in Washington proves that freshman lawmakers can be players of consequence in Congress." [12]

In July 2016 Ratcliffe passed the Separation of Powers Restoration Act of 2016 out of the House of Representatives by 240 to 171 vote. Ratcliffe applauded its passage as a "huge win against the regulatory state" and says it "knocks the pillars out from under the Regulatory State after 30 years of growth fueled by Chevron Deference.” [13]

Ratcliffe and his wife, Michele, reside in Heath, Texas, with their two daughters.