Michael Thomas "Mike" McCaul Sr. (born January 14, 1962) is the U.S. Representative for Texas's 10th congressional district, serving since 2005. Since the beginning of the 113th Congress, he has been the Chairman of the House Committee on Homeland Security. He is a member of the Republican Party. The district stretches from Austin to Houston. As of 2015 he is the second wealthiest member of Congress.

McCaul was born in Dallas, Texas, the son of Frances Jane (Lott) and James Addington McCaul, Jr. He has English, Irish, and German ancestry.[1] He graduated from Jesuit College Preparatory School of Dallas. He earned a Bachelor of Arts in history from San Antonio's Trinity University in 1984 and his Juris Doctor from St. Mary's University in 1987. McCaul also attended Harvard University, taking courses in the Kennedy School of Government.[2]

McCaul worked as an attorney and a federal prosecutor before entering politics. He was the Chief of Counterterrorism and National Security for Texas's branch of the US Attorney's office, and also worked under the Department of Justice's Public Integrity Section. After he left the USDOJ, McCaul took a position as a Deputy Attorney General in 1998 with the Texas Attorney General's Office and served in this capacity until 2002.

He ran for the U.S. House of Representatives in 2004. He won a crowded Republican primary in the newly created 10th District. The district was thought to be so heavily Republican that no Democratic candidate even filed, effectively handing the seat to McCaul.

In 2010, he was re-elected to a fourth term by a wide margin (76%) against Democratic candidate Ted Ankrum (22%) and Libertarian candidate Jeremiah "JP" Perkins (1%).

In August 2011 AlterNet reported that McCaul, along with John Culberson and Ted Poe, was attempting to remove the right of deceased soldiers families to choose which prayers, if any, were to be read at a soldier's funeral.[4][5] The three politicians were said to be attempting to impose Christian ceremonies on the military funerals of everybody who has served in the military, regardless of whether or not the deceased was Christian and with or without the consent of the family of the deceased. The three politicians stated their demands were a response to Veterans Affairs (VA) banning Christian prayers at military funerals,; however, VA state this claim is "blatantly false" as VA respects families' "rights to pray however they choose at our national cemeteries".[4][5]

In September 2013, McCaul said that he would trust Russia rather than the United States to account for Syria's chemical weapons stockpile.[6] He did say that the monitoring and destruction of the chemical weapons in Syria would have to be overseen by an international commission of the United Nations, emphasizing that Putin and Russia have superior leverage over Syria to better accomplish the removal of WMD from the Syrian arsenal.

On November 30, 2016 McCaul appeared on Fox News with Bret Baier to discuss his possible nomination to head the Department of Homeland Security by president-elect Donald Trump. McCaul's interview was marred with controversy when Baier cited a Washington Times article quoting William Gheen of Americans for Legal Immigration PAC which said "We certainly hope that Donald Trump would not reward a deceptive pro-amnesty lawmaker like Michael McCaul with a Cabinet position," said William Gheen, president of Americans for Legal Immigration PAC. "That would be very disappointing to all of us that believed his campaign promises to secure our borders and deport millions of illegal immigrants under current U.S. laws."[7][8] 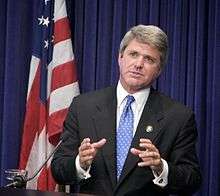 On December 11, 2013, McCaul introduced the National Cybersecurity and Critical Infrastructure Protection Act of 2013 (H.R. 3696; 113th Congress), a bill that would amend the Homeland Security Act of 2002 to require the Secretary of the Department of Homeland Security (DHS) to conduct cybersecurity activities on behalf of the federal government and would codify the role of DHS in preventing and responding to cybersecurity incidents involving the Information Technology (IT) systems of federal civilian agencies and critical infrastructure in the United States.[9][10] McCaul said that the bill was "an important step toward addressing the cyber threat."[11] According to McCaul, the bill "establishes a true partnership between DHS and the private sector to ensure the distribution of real-time cyber threat information in order to secure our nation in cyberspace without burdensome mandates or regulations."[11]

In a December 2, 2016 Fox News op-ed, McCaul declared his intention to support legislation, in line with president-elect Donald Trump's proposals, to build a wall along the Mexico–United States border, to secure the border, and have Mexico and other Latin American countries pay for these proposals.[12] 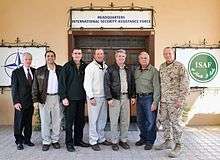 McCaul is married to Linda Mays McCaul. She is the daughter of Clear Channel Communications chairman Lowry Mays and sister of its CEO Mark Mays. In 2011, Roll Call named McCaul as one of the wealthiest members of the United States Congress, surpassing then U.S. Senator John Kerry (D-MA). His net worth was estimated at $294 million, which is approximately 300% higher than it was in the previous year ($74 million).[13] In 2004, Roll Call estimated his net worth at just $12 million. His wealth increase was due to large monetary transfers from his wife's family.[14] The McCauls live in West Lake Hills, Texas, a wealthy suburb of Austin, Texas, with their children, daughters Caroline, Jewell, Avery, and Lauren, and a son, Michael.