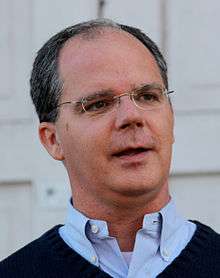 Steven Brett Guthrie (born February 18, 1964) is the U.S. Representative for Kentucky's 2nd congressional district. Located in central Kentucky, the district covers Fort Knox, Owensboro, Bowling Green and Danville. He has served in that role since 2009. He is a member of the Republican Party. He previously served in the Kentucky Senate.

Guthrie was born in Florence, Alabama, the son of Carolyn P. (née Holt) and Lowell M. Guthrie.[1] He earned his Bachelor of Science in mathematical economics from the U.S. Military Academy at West Point in 1987[2] and his Master's of Public and Private Management from Yale University in New Haven, Connecticut, in 1997.

Guthrie is a former vice president of Trace Die Cast, Inc., an automotive parts supplier based in Bowling Green. Guthrie has previously served as a field artillery officer in the 101st Airborne Division at Fort Campbell, Kentucky.

Guthrie represented the 32nd district in the Kentucky Senate from 1999 to 2008, where he served as vice chairman of the Economic Development, Tourism and Labor Committee, and was chairman of the Transportation Committee.

In the 2008 congressional general election, he defeated his Democratic opponent, State Senator David Boswell, for the right to succeed the retiring Republican U.S. Representative Ron Lewis. Lewis announced his retirement on the last day for candidates to file for the seat in 2008, in hopes of steering the Republican nomination to his chief of staff, Daniel London. Guthrie, however, filed his papers and defeated London for the party nomination.

This set up the closest race in the 2nd in 14 years. While Democrats have a large advantage in registration, they are very conservative on social issues, a major reason Lewis had been able to hold on to the district with little trouble since winning it in a 1994 special election. Ultimately, Guthrie prevailed by 15,500 votes, mostly on the strength of rural voters. Guthrie may have been boosted by voters being more motivated to come to the polls due to the Presidential election and the Senate election that were held at the same time. Republican candidate John McCain carried the district with 60 percent of the vote and won all but one county entirely within the district. The incumbent Republican Senator Mitch McConnell also carried the 2nd district easily.

The 2nd reverted to form in 2010, and Guthrie defeated Democrat Ed Marksberry by a large margin.

In December 2013, Suzanne Miles, Guthrie's district representative in Owensboro, won a special election to the 7th District seat in the Kentucky House of Representatives. She became the 46th Republican member of the chamber, the highest since 1921.[3]

Based on a questionnaire and the votes that the National Rifle Association Political Victory Fund considered to be the most important in 1998, they assigned Representative Guthrie a grade of B.[4] He has since received A's from the NRA and various other Second Amendment rights advocacy groups. In 2011, Guthrie voted for the National Defense Authorization Act for Fiscal Year 2012 as part of a controversial provision that allows the government and the military to indefinitely detain American citizens and others without trial.[5] In July 2013, Guthrie voted against the move to defund the National Security Agency due to the alleged privacy violations reported by whistleblower Edward Snowden.[6]

Guthrie is not particularly affiliated with the Tea Party movement and unlike the majority of members of his own party voted to end the United States federal government shutdown of 2013.[7]

With his family, Guthrie attends the Lehman Avenue Church of Christ in Bowling Green, Kentucky, as reported by the Christian Chronicle; Michael Greene, minister of the Lehman Avenue congregation, said that he has no doubt "Guthrie's faith will play a positive role" in representation of the 2nd district.[8]