The transport network in Greater Tokyo includes public and private rail and highway networks; airports for international, domestic, and general aviation; buses; motorcycle delivery services, walking, bicycling, and commercial shipping. While the nexus is in the central part of Tokyo, every part of the Greater Tokyo Area has rail or road transport services. The sea and air transport is available from a limited number of ports for the general public.

Public transport within Greater Tokyo is dominated by the worlds most extensive urban rail network (as of May 2014, the article Tokyo rail list lists 158 lines, 48 operators, 4,714.5 km of operational track and 2,210 stations [although stations recounted for each operator]) of clean and efficient surface trains and subways run by a variety of operators, with buses, trams, monorails, and other modes supporting the railway lines.[1] The above figures do not include any Shinkansen services. However, because each operator manages only its own portion, the system is managed as a collection of rail networks rather than a single unit; many operators have ongoing upgrades and expansions underway. 40 million passengers (counted again when passing through a gate and not simply a platform) use the rail system daily (14.6 billion annually) with the subway representing 22% of that figure with 8.66 million using it daily.[2] Extensive through services for seamless and rapid interconnections are also a feature of the network: the Narita-Haneda service run integrates track of 6 separate and independent operators. There are 0.61 commuter rail stations per square mile in the Tokyo area, or one for each 1.6 square miles of developed land area. Commuter rail ridership is very dense, at 6 million people per line mile annually, with the highest among automotive urban areas.[3] Walking and cycling are much more common than in many cities around the globe. Private automobiles and motorcycles play a secondary role in urban transport.

Ibaraki Airport, located 85 km north of Tokyo, was positioning itself as a hub for low-cost carriers, flights from here to Sapporo seem to be the most popular. Shizuoka Airport, 175 km southwest of Tokyo, aims to be a more convenient alternative for Shizuoka residents than airports in Tokyo or Nagoya, however none of the above airports have shown to take away any significant traffic from Narita or Haneda and continue to play minor roles.

In addition, the Greater Tokyo area has military bases with airfields:

There is also a limited number of helicopter transport services in Tokyo, with one service linking Narita airport with central Tokyo.[4]

Rail is the primary mode of transport in Tokyo. Tokyo has the most extensive urban railway network and the most used in the world with 40 million passengers in the metro area daily.[2] There are 882 interconnected rail stations in the Tokyo Metropolis, 282 of which are Subway stations,[5] with several hundred more in each of the 3 surrounding densely populated suburban prefectures. There are 30 operators running 121 passenger rail lines (102 serving Tokyo and 19 more serving Greater Tokyo but not Tokyo's city center itself), excluding about 12 cable cars. Despite this vastness, the network is still being expanded, albeit with more service upgrades and fewer new lines. Each of the region's rail companies makes its own maps, with key transfer points highlighted. Trains are often extremely crowded at peak travel times, with people being pushed into trains by so-called oshiya ("pushers"). Most lines in Tokyo are privately owned and operated, though the Toei Subway is run directly by the Tokyo Metropolitan Government and Tokyo Metro is owned indirectly by the Tokyo and national governments. Rail and subway lines are highly integrated and dense; commuter trains from the suburbs continue directly into the subway network on many lines, often emerging on the other side of the city to serve another company's surface commuter line. Shinjuku Station is the busiest train station in the world by passenger throughput.[6] It is estimated some 20 million people use rail as their primary means of transport (not trips) in the metropolitan area daily. In comparison, the entire country of Germany, with the highest railway use in Europe, has 10 million daily train riders.[7] 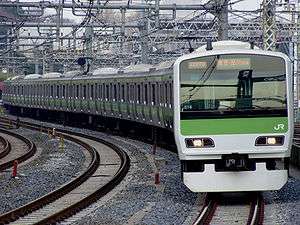 East Japan Railway Company, or JR East, is the largest passenger railway company in the world. It operates trains throughout the Greater Tokyo area (as well as the rest of northeastern Honshū).

In addition to operating some long-haul shinkansen ("bullet train") lines, JR East operates Tokyo's largest commuter railway network. This network includes the Yamanote Line, which encircles the center of Tokyo; the Keihin-Tōhoku Line between Saitama and Yokohama; the Utsunomiya Line (part of the Tōhoku Main Line) to Saitama and beyond; the Chūō Line to western Tokyo; the Sōbu Line and Keiyō Line to Chiba; and the Yokohama, Tōkaidō, and Yokosuka lines to Kanagawa.

Many additional lines form a network outside the center of the city, allowing inter-suburban travel. Among these are the Hachikō, Itsukaichi, Jōban, Jōetsu, Kawagoe, Musashino, Ōme, Negishi, Nambu, Sagami, Takasaki, and Tsurumi lines. In total, JR alone operates 23 lines within the Greater Tokyo area.

JR East is also the majority shareholder in the Tokyo Monorail, one of the world's most commercially successful monorail lines. 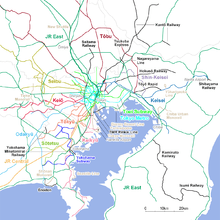 Regional railways transport commuters from the suburbs to central Tokyo. These include several private railway networks that own and operate a total of 55 lines serving Tokyo. These same operators indirectly operate another 24 lines outside of Tokyo as well as a few tourist-oriented aerial lifts and funiculars.

Some private and public carriers operate within the boundaries of Tokyo.

Railway companies that serve other parts of Greater Tokyo include:

Below is the annual ridership of each major operator as of the 2010 fiscal year.[16] Transfers between operators are not counted unless they pass through a ticketing gate (not simply a platform).

Public buses in Greater Tokyo usually serve a secondary role, feeding bus passengers to and from train stations. Exceptions are long distance bus services, buses in areas poorly served by rail (not many exist), and airport bus services for people with luggage. Tokyo Metropolitan Bureau of Transportation operates Toei buses mainly within the 23 special wards while private bus companies (mostly the subsidiaries of the large train operators listed above) operate other bus routes, as do other city governments, such as Kawasaki City Bus, Yokohama City Bus, etc. Toei buses have a fixed fare of 200 yen[17] per ride, while most other companies charge according to distance. Some train operators offer combined bus/train tickets; special fares apply for children, seniors and the disabled. Some routes feature non-step buses with a kneeling function to assist mobility-impaired users.[18] Tokyo has a one tram line, known as Tokyo Toden. The network had 41 routes with 213 kilometers of track. Now Tokyo has one tram line and one light rail line.

Taxis also serve a similar role to buses, supplementing the rail system, especially after midnight when most rail lines cease to operate. People moving around the city on business often choose taxis for convenience, as do people setting out in small groups. 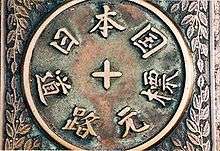 National, prefectural and metropolitan, and local roads crisscross the region. Some of the major national highways are:

The datum from which distances are reckoned is in Nihonbashi.

The Shuto Expressway network covers central Tokyo, linking the intercity expressways together, while primarily serving commuters and truck traffic. The Bayshore Route bypasses Tokyo by traveling from Kanagawa Prefecture in between, above, and under manmade islands around Tokyo Bay to Chiba Prefecture. The Tokyo Bay Aqua-Line, which goes underneath Tokyo Bay, links Kawasaki to Kisarazu in Chiba Prefecture. Important regional expressways include the Tokyo Gaikan Expressway, Daisan-Keihin Road, and Keiyō Road. Presently under construction (with some segments operating), the Ken-Ō Expressway will be a major circumferential through the area.

The notable route which serves as internal transport is Tokyo-Wan Ferry, the car-passenger ferry route between Yokosuka, Kanagawa and Futtsu, Chiba,[21] crossing Tokyo Bay. Other passenger services within the bay are mostly used as scenic cruises, such as Tokyo Cruise Ship and Tokyo Mizube Line in Tokyo, The Port Service and Keihin Ferry Boat in Yokohama.

Out of the bay, the car-passenger ferries to the Izu Islands and the Ogasawara Islands, Shikoku, Kyūshū, the Amami Islands and Okinawa serve from the ports of Tokyo or Yokohama.[22] The car-passenger ferries to Hokkaidō serve from Ōarai, Ibaraki.[22] There are some other freight ferries (which can carry less than 13 passengers) serving out of the Bay.

Shipping plays a crucial role for inbound and outbound freight, both domestic and international. The Port of Tokyo and Port of Yokohama are both major ports for Japan and Greater Tokyo.

Main articles: Two-wheeler usage in Japan and Walking in Japan